In 1827, Christian missionaries travelled into the jungles of Burma to bring the gospel to an indigenous group known as the Karen people. As the missionaries began teaching the Karens from the Bible, they were astounded to discover that the Karens already worshipped a deity they called “Y’wa”, had a detailed creation story with striking parallels to the biblical Eden narrative, and had many other folktales mirroring the traditional accounts found in Genesis.1

That same year, a world away, Joseph Smith Jr. obtained a mysterious artifact that would become the Book of Mormon, published in New York in 1830. This book told of an ancient lost civilization: a monotheistic splinter from the house of Israel that settled an distant “promised land,” whose founding story involved contentious brothers, some of whom embraced God’s words, while the others rejected them. The book contains prophecies concerning the Gentiles: how the gospel would be brought back through them, and the unbelieving factions would be restored the to knowledge of the true God. The story concludes with the account of the last believer, who seals up a book of gold which contains these holy words, promising that his brothers will someday obtain his words, and then flees for his life.2

In the 1840s, Reverend Francis Mason, one of the early missionaries to the Karen, published several treatises detailing his findings, observations and interactions among the Karen people. One of these was called “The Karen Apostle,” a memoir about the first Karen convert, Ko Thah-byu.3 Mason and other missionaries continued working with the Karen people, and learned more and more about their traditional mythology. One legend that continually surfaced told of an elusive “lost book of gold” that was once among the people, but was taken by a “white Westerner” or “foreigner”, with a prophecy that the Karen would one day regain the words from this lost book. One recounting of this legend goes:

Our book of gold that Y’wa gave,
Our book of silver that he gave,
The elders did not obey.
Lost, it wandered to the foreigner.4

In 1853, another missionary, Reverend E. B. Cross, referencing much of Mason’s work, wrote a more detailed article that would be published in the Journal of the American Oriental Society. In this article, Cross tells of the tradition of prophets among the Karens, and how these prophets taught that “the white foreigners were in the possession of all the words of God, and that they would one day come and restore to the Karens the true knowledge of God, which they professed themselves to have lost, and would restore their books containing the word of God.”5

Cross further retells Karen legends surrounding their origin as a tribe, telling of a ‘younger brother,’ also known as the ‘white Westerner,’ who God receives, and “warns him not to remain in the country of the elder brother,” and escapes “to a country in the West.” The legend is eluded to in this traditional Karen verse:

The Bible as the Lost Golden Book

The Christian missionaries picked up on this tradition, and the Bible was presented to the Karen people as this “lost golden book.” The foreign missionaries were evidently the “white brothers” who were coming to bring the forgotten knowledge of God back to them. Even now, this legend, and its connection to the Bible, is cited in Burmese Christian Ministries. Saw Ka Law Lah, a modern Burmese pastor, explains:

The Karen have legends. It says that in the beginning, God had three sons, the eldest son is the Karen, and the second son is the Burmese, and the third son is the white man. But, the youngest brother read the book, and take it away, so he becomes educated and prosperous.

So in the 19th century, during the 19th century when the American Baptist mission came to Burma, all [the] Karen people went to meet him, and asked for the Golden Book. “You [took] our golden book, why not giv[e] [it] back [to us]?” The missionary had no idea, then [they] related the story that this [the Bible] is the book.

“You are prosperous now because of this Golden Book; we want that Book back, so that our children will be prosperous too. And according to our legends, you will someday come and give it back. Now, where is the book?”

Then, the American mission [took] the opportunity, the Bible was translated to Karen, and when the Bible was completed, the Karen became Christian in a rapid motion, and every Karen who learned that this is the Golden Book we received back, they accepted Christianity in a very rapid motion.7

To this day, the Karen people remain an anomaly in their large-scale acceptance of Christianity among neighboring groups, and are celebrated as an example of God preparing the people of the earth for the gospel.8

Echoes of the Book of Mormon

Nearly 100 years after the first Christians’ exposure to the Karen and their legends, Hugh Nibley, noting the findings of E.B. Cross, saw some unmistakable similarities between the Karen narrative and the Lehite account found in the Book of Mormon. He stated that “the case of the Karens is particularly interesting because those people have displayed such astonishing cultural affinities with the Jews that some observers have even claimed them to be of Jewish origin. If that is so, their history may have paralleled Lehi’s in more ways than one.”9 It appeared that the Book of Mormon story—with tales of golden plates, family feuds, rejecting God’s words and prophets, and promises of restoration to the remnant of their seed by means of the return of a lost book—could be overlaid on the Karen legends with far more compelling connections than the Bible could be.

In 1994, Dr. Ralph Olsen, a Cornell-educated retired chemistry professor from Montana State University, drafted a book-length manuscript in which he hypothesized (among other things) that the Karen people are not merely an interesting parallel to the people of the Book of Mormon, but are actually integral to the Book of Mormon story. He further surmised that the Book of Mormon account—while literally historical—did not take place in the Americas, but rather took place directly south of the home of the Karen people: The Malay Peninsula, which covers Malaysia, Singapore, and parts of Thailand and Burma.10

Dr. Olsen’s hypothesis postulates that Lehi and his family, having launched from the Arabian peninsula, traveled through the Indian Ocean, into the Bay of Bengal, and landed on the Malay Peninsula. Non-Mormon Anthropologist Harold Gladwin has suggested that around 300 BC, Nearchus, a prominent Cretian naval officer, made a journey with his fleet from the Middle East to the Malay Archipelago and beyond to the Pacific after the death of Alexander the Great. Gladwin’s proposed route takes Nearchus’ fleet through a very similar path that Dr. Olsen puts forth for that of the Lehites and Jaredites. Gladwin’s theory serves to explain several historic unknowns, such as the fate of Nearchus, and the existence of Indonesian groups claiming descent from Alexander the Great;11 and it supports the plausibility of early marine travel from the Middle East to Southeast Asia. His book entitled Men Out of Asia contains this map and proposed route:12 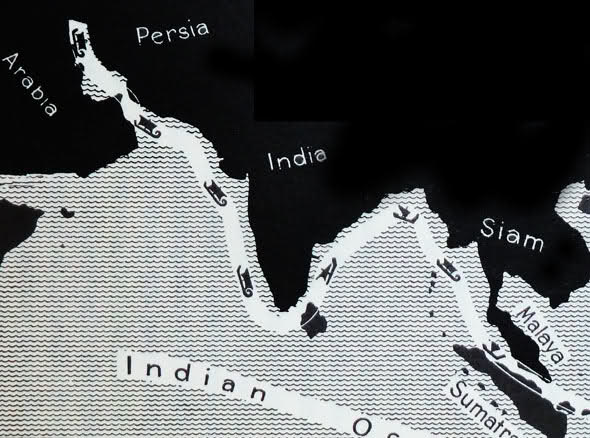 According to the Malay Hypothesis, the sagas of the Nephites, Lamanites, Mulekites, and Jaredites would have taken place within the confines of the Malay Peninsula. This theory has been discussed at some length in the bloggernacle, and has by-and-large either been mistaken for satire,13 summarily dismissed as wholly implausible,14 or cited as evidence that Book of Mormon geography is sufficiently amorphous to render false positives in nearly any given setting.15 Dr. Olsen, however, is convinced that he has identified “a more promising land of promise.”16

Stay tuned for the remaining posts, in which the following topics will be addressed: