This is the final post of a 4 part series.  Context for this post is provided in part 1, part 2 and part 3.

The Church of Jesus Christ of Latter-day Saints has wisely taken no official position on Book of Mormon geography,89 despite the clear presence of americentric sentiment throughout the Church as a whole. Approaching the Book of Mormon in a new paradigm offers a broad array of interesting possibilities, that may prove to be useful in this age where science, history, and the public eye are putting an increasing amount of scrutiny on the Book of Mormon as a historical text. Dr. Olsen submits that his Malay Hypothesis is merely a “tentative guess,” and invites experts to challenge his proposals:

In science, if a hypothesis seems faulty we at least try to concoct a better one. I accordingly postulate that Book of Mormon peoples left their homelands in the Middle East and found lands of promise on the Malay Peninsula. My hope is that, as an uninvited intruder in a sacred domain, I will be permitted to present the Malay Hypothesis as a tentative guess. Qualified experts are encouraged to make the needed adjustments and to do the requisite digging to check its validity.90

To date, the only credible scholar to address Dr. Olsen’s Malay Hypothesis with more than a cursory glance or summary dismissal is Brant Gardner, an ethnohistorian of Mesoamerica. In an effort to establish the element of falsifiability in any given external placement of the Book of Mormon setting, Gardner analyzes the summary points Olsen presents in a 2004 Sunstone article91 on the Malay Hypothesis.92 Gardner addresses some of the article’s points that he deems plausible, others that he considers less plausible (or irrelevant to the issue of falsifiability) and concludes that the Malay Hypothesis does not contain sufficiently credible correspondence to the Book of Mormon text to warrant further investigation of the setting, and further notes that the points that do seem plausible (such as the general topology) are vague or flexible enough to be ascribed to coincidence.93

The question as to whether any given location is even worth looking into as a viable candidate is a valid one. America remains the conventionally obvious place to look. Even so, Hugh Nibley highlighted the difficulties associated with trying to place the Book of Mormon in the more traditionally accepted setting of the Western Hemisphere:

The Book of Mormon…is not a history of the Indians, but only of some very remote relatives of theirs living in a distant age with a totally different culture; it does not describe or designate any known ancient people, civilization, or individual in the Western Hemisphere, nor does it designate any recognized place, city, or territory in the New World.94

With that statement in mind a very interesting phenomenon to note is that the external evidences that appear to bolster the Book of Mormon’s credibility as an ancient document are overwhelmingly associated with the Eastern Hemisphere:

In contrast, Book of Mormon associations with the Western Hemisphere have followed an unsettling trend:

To be fair, external evidences for plausibility in the New World have surfaced in past years, such as cement highways,111 volcanism,112 mtDNA haplogroup X,113 similarities to Mayan customs and political structures,114 Mayan gardens,115 and Mesoamerican temples.116 However, these points appear notably less robust (or precise) when juxtaposed with features of Southeast Asia, which include: documented use of writing on metal plates,117 wheeled vehicles,118 a millennialist tradition among indigenous people,119 suitable flora and fauna,120 a town called “Lammuella,”121 a modern Burmese battleground known as “Kawmoora,”122 and—of course—the persistent legend of a prophetic brother who left his rebellious kin, taking with him a golden book containing the words of Y’wa, promising that the words from this book would someday be restored.123 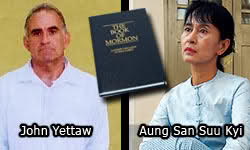 In 2009, an LDS man named John Yettaw trespassed into the home of prominent Burmese opposition leader Aung San Suu Kyi. Equipped with homemade flippers and heroic charisma, he swam across Inya Lake and intruded into the heavily guarded Yangon compound in which she is continuously under house arrest. He passed the AK-47-brandishing security guards,124 and delivered to her, among other things, a copy of the Book of Mormon.125

Could Yettaw have been the ‘white foreigner’ who unknowingly brought to pass the fulfillment of the prophecy concerning the return of the Lost Golden Book?

There are some rumored underground LDS branches in Mandalay and Yangon, but there is no established foundation of the Church of Jesus Christ of Latter-day Saints within the military dictatorship of Burma. Yettaw’s stunt is, to date, the most prominent advance in LDS missionary efforts to Burma, and is also a notably singular event in terms of United States outreach to Burmese leaders. Referring to the incident, Yangon citizens often quip: “China gets ping-pong diplomacy, Burma gets John Yettaw.”126

Does Southeast Asia have a greater place within the latter-day narrative and the gathering of Israel than may have previously been supposed? Joseph Smith noted that he “tried for a number of years to get the minds of the Saints prepared to receive the things of God; but we frequently see some of them, after suffering all they have for the work of God, will fly to pieces like glass as soon as anything comes that is contrary to their traditions: they cannot stand the fire at all.”127 If nothing else, perhaps Dr. Olsen’s hypothesis gives us a new context in which to consider the scripture concerning those who are “kept from the truth because they know not where to find it.”128