This is part 2 of a 4 part series.  Context for this post is provided in part 1.

At first glance the Malay Hypothesis’ most striking strong point is the peninsula’s correspondence to geographic features mentioned in the Book of Mormon text. The size and relative distances between various points are commensurable with those of the limited geography theories of Mesoamerica. The general contours of the coastline feature distinct southern and northern lands adjoined by a narrow neck—features that originally led the hemispheric model of the Americas to be the logical choice.

The narrow neck of land has long been the must-have feature of any Book of Mormon geography model. The text states that it took between 1–1.5 days by foot to traverse the narrow neck of land.17 Foot soldiers are known to cover 15-40 miles in a day.18 That places the acceptable range of the narrow neck’s width to around 19-50 miles wide. The narrow neck of the Malay Peninsula is between 30 and 40 miles, a far more suitable distance than Tehuantepec’s 130 miles, the Yucatan’s 190 miles, Eerie-Ontario’s 20 miles, or Lake Nicaragua’s 10 miles.19

The Nephite and Lamanite lands were reportedly divided by a “narrow strip of wilderness” in the vicinity of the headwaters of the river sidon.20 A prominent hill station named the “Cameron Highlands” spans west to east through Malaysia, and is situated south of the headwaters of the Kelantan river, a river system that creates a large river basin in the northeast quadrant of the peninsula’s main body.21 The geographic correspondence between the Kelantan river basin and the river Sidon of the land of Zarahemla is striking.

At the floodplain of the Kelantan river is a city called Tenah Merah. Anciently, Tenah Merah was the capital of a kingdom known to the Chinese Sui Dynasty as “Chi Tu,”22 which is likely the same as “Raktamaritika,” which was known to the Thai as one of the lost kingdoms of their history.23 Chronological evidence places Chi Tu around the year 600 AD,24 possibly making them a remnant of Zarahemla after the Nephite collapse. Dr. Olsen further draws attention to the orthographic correlation between the names “Tenah Merah” and “Zarahemla.” The variants between the two names are certainly no greater than those found between the English “William” and the french “Guillaume,” and if it stands the test of further scrutiny, this may well be considered an external corroborate on par with the NHM-Nahom connection of Yemen.25

Perhaps the most appealing features of the Malay Hypothesis are those that deflect the considerable difficulties involved in attempting to place the Book of Mormon into pre-Columbian America.

Issues surrounding the flora and fauna described in the Book of Mormon have long been the subject of debate, and the impetus for reinterpretations or other creative solutions to match the text of the Book of Mormon to the known plant and animal landscape of the ancient New World.26 Domesticated barley and wheat have appeared only sparsely in paleoethnobotanical studies of pre-Columbian America,27 and the Book of Mormon is strangely silent with regards to the types of crops that would have been common to the area, such as chocolate, tomatoes, maize, or potatoes.

Likewise, great difficulty has been involved in locating any significant evidence for “the cow and the ox, and the ass and the horse, and the goat and the wild goat,”28 to say nothing of elephants or the cryptozoologic cureloms or cumoms.29 John Sorenson, seasoned Mormon scholar and early proponent of the Tehuantepec limited geography theory, has publicly bemoaned the overwhelming unlikeliness of locating Book of Mormon animals in the ancient New World without substantial reinterpretations of the text:

What kind of animals did the Nephites have? The terms cattle, horses, sheep and so on are mentioned at several points in the Book of Mormon, in the Nephite record. And it is dismaying to some, some who wish to be dismayed, I believe, (and a few others who wish an answer could be provided) why there are not cows like we mean cows, horses like we mean horses, sheep like we mean sheep. The fact is, however, is that all the ancient studies say those animals simply were not present in the New World. Period. They were not here.

Well, 99.9% period. There is some little possibility of some horses as we know horses. The likelihood, however, is that we must go back to the text again, we see the internal having to articulate constantly with the external. We get some ideas from the internal, look outside, try to get enlightening, illuminating information, and then we may have to back into the text, and re-read it, and understand: “Let’s see now, when Mormon said this, what did really mean? Did he mean what I think he means? Or shall we read it the way he wrote it an meant it in his mind? We do not know that when he said ‘horse,’ he meant our kind of horse.”30 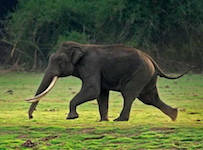 Framing the Book of Mormon within the megadiverse biosphere of the Malay Peninsula virtually dissolves every one of these obstacles; it decreases the reliance on loose semantics, and doesn’t require holding out for the 00.1% chance Sorenson mentions. While cureloms and cumoms remain unidentified, the other animals (including elephants) as well as the crops that are so problematic for the ancient Americas, all become far less challenging.31 Likewise for issues of metallurgy: all manner of “iron, and of copper, and of brass, and of steel, and of gold, and of silver, and of precious ores, which were in great abundance” in Nephi’s promised land were also found in the Old World.32

LDS anthropologist Raymond Matheny, a professor at BYU, delivered a speech alongside University of Maryland archaeologist John Carlson in which he puts himself “in a non-Mormon’s professional shoes and talk[s] about the nature of the problems that the Book of Mormon poses for the archaeologist,”33 and from that position, comments on how Book of Mormon events would seem more suitably placed in an Old World setting:

I would say in evaluating the Book of Mormon, it had no place in the New World whatsoever. And we’d have to look for the place of the Book of Mormon events to have taken place in the Old World. It just doesn’t seem to fit anything that he [John Carlson] has been taught in his discipline, nor I in my discipline in anthropology, history; there seems to be no place for it. It seems misplaced. It seems like these are anachronisms. It seems like the items are out of time and place, and trying to put them into the New World. And I think there’s a great difficulty here for we Mormons in understanding what this book is all about.34

Furthermore, the Book of Mormon’s embarrassing negative references to “skins of blackness”35 take on new possibilities in considering the presence of the Semang, an indigenous dark-skinned negroid ethnic group that existed on the Malay Peninsula.36 In the early years, those not adhering to the principles of marrying within the covenant (the followers of Laman, Lemuel, and the sons of Ishmael) would likely have intermixed with the pagan Semang, and received their designation as Lamanites, along with the physical characteristics that would have set apart their offspring.

Another problem associated with the Book of Mormon that becomes far less pressing is that of DNA. Simon Southerton is a molecular biologist whose DNA analysis was nearly synchronous with the 2004 revision to the Book of Mormon’s official introduction, which had previously stated that Lamanites are the “principal ancestors” of the native people of the Americas.37 In his analyses, Southerton demonstrates the problems involved in ascribing Middle Eastern origins to the native Americans, and submits that the traditional understanding of the identity of the Lamanites does not correspond with the findings of modern science.38 Interestingly, however, Southerton does refer to some DNA research that hints at the possibility of a lost tribe of Israel reaching as far as the Bay of Bengal—which happens to adjoin the waters directly west of the Malay Peninsula.39

One very important component of Dr. Olsen’s Malay Hypothesis is that it takes a very expansive interpretation of Lehi’s words that state that his family “should be led with one accord into the land of promise, unto the fulfilling of the word of the Lord, that [they] should be scattered upon all the face of the earth.”40 The proposed reading of this passage is that the descendants of Lehi would have continuously have been expanding outward, further “scatter[ing themselves] upon all the face of the earth.” Early Nephites,41 Hagoth and his people,42 disaffected Nephites during Helaman’s judgeship,43 Jacob and his faction,44 and doubtless others would have constituted this “scattering” to the land northward, to the “islands of the sea,”45 and beyond.

This corresponds to the Book of Mormon’s mentioning of a plurality of “lands of promise,”46 which would very well include the Americas: the continents more traditionally thought of as the “promised land.” Fittingly, leading anthropological research does in fact indicate that the islands of the Pacific were populated from west to east, and many populations found in the Pacific trace their origins to the Malay Archipelago.47

Dr. Michael Coe, a non-Mormon archaeologist of Mesoamerica who is well versed in the Book of Mormon, finds no compelling evidence to suggest that Old World contact with the Americas was Middle Eastern in origin. He is, however, agreeable to the possibility of Pacific Islanders and Southeast Asians having successfully reached America:

I’d like to say one thing now, is that… about this whole idea of contact between the Old World and the New World. I’m not entirely against the idea of transoceanic contacts, in fact, there’s beginning to be evidence for it. The leading scholar of this kind of stuff is a Mormon, a friend of mine, John Sorensen at BYU, who’s written extensively about this whole thing. Very interesting stuff. I mean, he’s a real scholar. I think that he’s again often looking in the wrong direction, but I think there’s pretty good evidence for contact between east Asia and Southeast Asia, not the middle East at all, but totally in another direction across the Pacific… As I say, I’m not against this kind of study. John Sorenson has really come up with some interesting stuff, but to me, it all points the eastern part of the Old world, of Eura—eastern Eurasia—that is: China and Southeast Asia in particular.48

Additionally, non-Mormon archaeologist Gordon Ekholm of the American Museum of Natural History, who has also had notable exposure to Book of Mormon archaeology, expressed his belief that “there may have been some historical connection between the peoples of Middle America and those of southern Asia, and thus indirectly with early peoples in the Near East.”49

Accordingly, placing the setting of the Book of Mormon in Southeast Asia does not exclude the Americas from its designation as a land of promise. In fact, doing so may even add additional meaning to the words of Zenos, who said God will “remember the covenants which he made to their fathers. Yea, then will he remember the isles of the sea; yea, and all the people who are of the house of Israel, will [he] gather in… from the four quarters of the earth.”50 The connections and flow between Southeast Asia, the isles of the Pacific, and the American continents are illustrated in this map, again from Gladwin’s Men Out of Asia:51

Stay tuned for the remaining posts, in which the following topics will be addressed: