When I dream of after death,
my ambition makes Heaven
a cubbyhole. God’s place,
snug in a grove, seems nice
enough. Yet I step out from it.
I whittle Time’s Arrow down
to chips, shred them down
to dust grains, mull them down
to molecules. I press these
into a skyscraping stack of cards.
Smirking, I shuffle epochs.
Giggling, I fan all space-time
out, grinning as it spreads
easily at my bidding, or…

I wake alone on the flank
of a grand old battlefield.
I’ve visited it many times
and never want to leave
for long. The hillside taught
me heroism, how to be a man,
how to die well.

I walk the Dutch ground pining:
Where are my ghosts?
They were there when 3rd grade
me wanted only replica cannon
on which to climb; when teen
geek me came alone to read
on boulders out of tourism’s
way; when college freshman me
came in the dark of a Friday
night, after the chilling autumn
rains drove away all except
the ghosts and their votary,
holding communion
on the eye of a fishhook.
From Devil’s Den to Vincent’s Spur,
so keen their silent haunting;
I sang them Dixie on low ground
and Kathleen Mavourneen on
high. What a wonder it was
to be received by ghosts
whose blood distilled a
nation’s fate. My fate! Why
would they haunt anywhere else?
It was as if the instant
the Minie ball dropped their bodies
in Pennsylvania dirt, their spirits
rose double-quick to attention,
arrayed in a sacred picket line,
waiting for the untested boy
in tennis shoes, fat on cheese
crackers and turkey bacon,
drunk on guilt.

Like an architect’s square,
the ghosts filed
into a line which ran
from right flank to colors,
then refusing, angled left;
even now the stone
wall runs true. It ends
where Private Spirit guarded
the boulder on which his clay
crumpled with a bayonet
through the skull.
For the early yearning me,
he stood always in that spot,
whether the leaves fluttered
green or rustled brown. Until,
one someday in Adam’s county,
the ghosts gave up and left…

Now, my forty years retreat
beyond the vanishing line
which once held firm before
piercing
lead squalls and rebel yells.
Now the ground lies
opaque and charmless.
Were they ever here?
The place seems pure
enough for ghosts but holds
only lists of lamby names
on a manicured ledge,
and a single leaf placed
by the breeze. 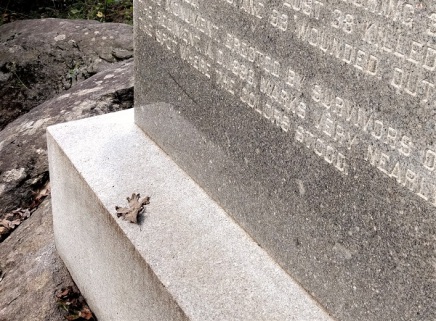 If you skipped it, the video I placed mid-poem is a 37-second pan of the hillside which constitutes the setting of this poem. Nothing fancy, just a helpful quick look.

For readers conversant with the defense of Little Round Top at the Battle of Gettysburg, I highly recommend the book Stand Firm Ye Boys From Maine by Thomas A. Desjardin. It serves as something of an antidote to the romanticized Gettysburg people experience in Michael Shaara’s marvelous novel The Killer Angels, as well as its film adaptation.

The primary image of Little Round Top, the secondary image of a leaf on the 20th Maine Memorial, as well as the video, were taken by the poet.

One thought on “Where are my ghosts?”