Balaam was a prophet, riding on an ass
Blocked by an angel, in a narrow pass
He pressed forward, and now I’m sad to tell
In the end for Balaam, it did not go too well.

It is easy to forget that the after Balaam blessed Israel, he decided to teach them to sin, so that they would lose God’s favor. In the end, he fell in battle fighting against Israel.

But a serious study of the Old Testament reveals Balaam as one of several very human prophets. In fact, a number of scholars have noted that if we took the Old Testament seriously we would learn that one of its major lessons is the humanity of prophets. The image of the hand of God, the examples of the essential humanity of prophets (they are not infallible) and the lessons that has for each of us is something we learn from a real study of Balaam and other prophets rather than stopping at the simple triumph narrative where Balaam blesses Israel after being tempted and paid to curse them.

He is a type for many, many other human prophets and a warning that over and over again next year, as we read the Old Testament, we will encounter prophets who while speaking for God and touched by the divine, were also prey to human weaknesses, short sighted diversions and were as flawed as any other human being. We neglect that, and expect more, at our peril. 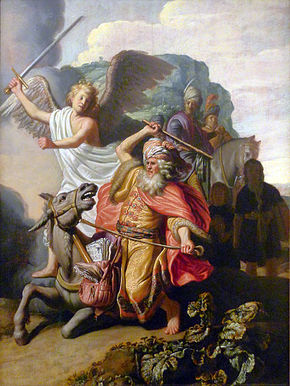 “Revelation 2:14, Balaam told King Balak how to get the Israelites to commit sin by enticing them with sexual immorality and food sacrificed to idols. The Israelites fell into transgression due to these traps and God sent a deadly plague to them as a result (Numbers 31:16).”

“Joshua 13:22 records that Balaam died “by the sword” during a battle for the Reubenite occupation of Moabite land.”

“In 1967, at Deir Alla, Jordan, archaeologists found an inscription with a story relating visions of the seer of the gods Bala’am, son of Be’or, who may be the same Bala’am mentioned in Numbers 22–24 and in other passages of the Bible.”

9 thoughts on “Learning from prophets — Balaam”