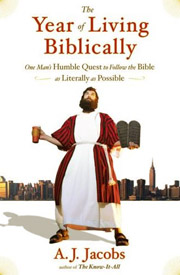 A while back I enjoyed reading “The Year of Living Biblically” by A. J. Jacobs.  A. J. is a secular Jew that decided to try living a very literal following of the bible for an entire year.  At first I thought his intent was to really just focus on how silly some of the “commandments” are, such as not wearing cloth made from more than one type of fiber.  Even though the book is humorous, it does not seem like the purpose is an attempt to make fun of these rules (oops – commandments).  He doesn’t seem to be doing this exercise for some spiritual journey.  He claims he grew up in a secular Jewish home and is Jewish only in “the same way the Olive Garden is an Italian restaurant.”  Instead of mocking anything he simply chronicles how this affects his day to day life and lets the humor manifest itself.  He mentions that he has to bring a chair with him everywhere to make sure he never has to “sit on soiled ground”.  He also does not shake hands or touch any women since he doesn’t know if it might be the time of the month where they are “unclean” (of course it would be rude to ask each woman he met – um right?).  He attempts to stone someone he believes to be a homosexual.  Don’t worry he only uses a small pebbles and he does it inconspicuously.  The person probably didn’t even know anything had occurred, but HE TRIED.  So he can put a check by that item and he is off the hook.  I can just see the meme from 2,500 years ago of a picture of someone throwing a small pebble at someone and the caption of, “Stoning – You’re doing it wrong!”

I contemplated about what the parallel would be in Mormonism.  I thought about digging into all the many things that church leaders have asked members to do and then show someone hypothetically attempting to check all the boxes, and even highlight the contradictions.  Before I made it very far down that mental road – fatigue set in.  Plus I can’t even figure out what is actual doctrine, let alone commandments. 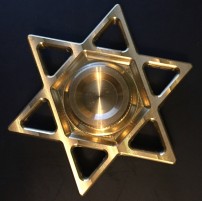 Being a Mormon isn’t like being a Jew.  They get clarifications for such important issues such as if using a “spinner” is an allowed activity on Sunday.

Getting that level of clarity is a 2 edged sword that I don’t want to take out of it’s sheath.  But within the LDS church it seems we are towards the other end of that spectrum.  We can’t even seem to get “Can you ask the Lord about giving the priesthood to women?” on the docket with the top leaders to ask the Lord (but we do get clarification on medical marijuana, so it all evens out).  But hey, we do have a CTR spinners!  I am not sure if they have a money back guarantee to keep you entertained for the 3 hour block.

Thinking about the endless lists of “check boxes” in Mormonism made me think about a talk that Elder Russell M. Nelson gave a few years ago titled, “Face the Future with Faith”  If you are like me, you remember this as the talk on evil of being a “Cafeteria Mormon.”   Bill Reel posted about this topic a few years ago on this site, but he focused more on being selective on what one believes.  I am thinking about this topic more on actions than beliefs.

In my opinion, every Mormon is a Cafeteria Mormon.  I know I am not alone in that view.  Reading the above mentioned book just drove home just how crazy the notion is.  I would go so far as to say a real attempt to “check every box” will probably have the end result being a need to visit a mental health professional (can you say, “Scrupulosity“?)

Mormon’s don’t even have an exclusive license to the prefix of “cafeteria” to slap in front of a denomination’s name.  I have seen the term “Cafeteria Catholic” thrown around with the same disparaging connotation insinuating less than fully faithful.

But I would contend that Jesus was a cafeteria Jew. After all, He boiled down all the Jewish rules and regulations into two precepts: Love God and Love Your Neighbor as Yourself (the ultimate “Happy Meal”).  He ignored many of the other commandments (or should I say customs?) found in Jewish society:

I do know there are some folks that do need a bit a boot to the backside to do a bit more instead of another round of binge watching a seasons worth of a TV series, but most people I know are trying really hard to do as much good as they can.  Even sacrificing some of their emotional and physical health trying to help others and keep up with the checklist.  In other words they are eating too many of the entrees and not enjoying most of them.

The cafeteria metaphor reminds me of the first time I took my oldest son to a cafeteria.  He ordered way more than he could eat.  He learned his lesson and has never over-ordered again.  If we try to not be a “cafeteria Mormon” and eat it all are we also going to be too “stuffed” to even do any good after cramming more and more into our schedule?  I actually have seen many individuals in the last few wards I have been in that are trying too hard to make sure every box is checked.  I have seen burnout and the results of burnout, such as divorces.  I assert that we need more preaching along the lines of Julie de Azevedo Hanks’ book, “The Burnout Cure: An Emotional Survival Guide for Overwhelmed Women”

It seems to me laying on the guilt trip for what is NOT being done also sets people up to be more worried about outward appearances in themselves and judging others.  I remember one of my favorite Gospel Doctrine teachers had a saying, “we all have our favorite commandments – the ones that are easy for us to keep, and then there are the hard ones that we find hard to keep.”  That is so easy to do – almost instinctual.  One simple example is I have always had a mild temperament and seem to be able to control my anger.  I know of others that are good caring people but they struggle in this area.  It is VERY easy for me to look at someone that flies off the handle and judge them because I have always found it rather easy to control my temper.  And I am sure there are situations where people look at my faults and wonder why I can’t just do the right thing.  I look at myself on a daily basis and ask that question!  It is good to start the day off with a laugh!

Even just having the mindset of the cafeteria approach to obedience tends to separate people into “us” and “them.” There’s “us” who obey everything (well not REALLY).  Then there is the “them” – those lazy cafeteria Mormons who don’t do as much as the “us”.  That does not help us have a mindset of bringing ourselves and others unto Christ.  In addition it can often will create the situation where everyone is at thinking everyone else is the “Cafeteria Mormon” and they are one of the few doing it “all.”  There is maybe one exception to that.  I recall reading a column from Salt Lake Tribune humorist Robert Kirby.  He essentially said that life gets rather enjoyable and easy if you just accept you are not getting into the Celestial Kingdom and you stop shooting for that.  As usual Robert leaves you with a smile, and also not sure if he is joking or serious – or both simultaneously.

Brothers and sisters, if you ever think that the gospel isn’t working so well for you, I invite you to step back, look at your life from a higher plane, and simplify your approach to discipleship. Focus on the basic doctrines, principles, and applications of the gospel. I promise that God will guide and bless you on your path to a fulfilling life, and the gospel will definitely work better for you.

I don’t agree with the assumption that we are going to always just pick the dessert and not the veggies.  I think most people are better than that.  Even when they are not perfect, most are like my son making a mistake and ordering too much at the cafeteria and learning not to do that again.  In thinking about raising my kids, when we have SOOO many rules do the really important items get drowned out in the long list?

We need to figure out what works for ourselves – including what is good and bad.  Take input from leaders and also advice from others in many areas.  We sometimes need to eat some things that don’t taste pleasant for our own good, but we also need to try other foods every once in a while.

If we went through the food line and got one of everything, we couldn’t eat it all and that probably increases the chances of a food fight!

How have you learned to pick what “foods” of the gospel you need and work best for you?

23 thoughts on “A Year of Living Biblically and Cafeteria Mormonism”