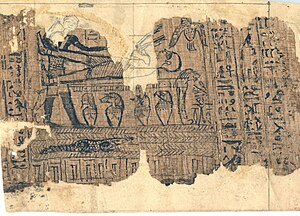 I was recently re-reading a post by Kevin Barney on this topic. Kevin’s post gives a great overview of the issues that have plagued Mormon historians’ defense of this book of scripture. He gives a historical overview of how the problems emerged, and then lists 4 usual defenses or stances apologists and Mormons in general take to explain the book’s implications.

The Kirtland Egyptian Papers (KEP) make it clear that Joseph believed he was translating the Book of Mormon from the Hor Book of Breathings. Before the materials were recovered, this claim was partly uncontestable because the materials used in translation were not available to be evaluated. Bear in mind that the Book of Abraham was produced in 1835 (published in 1842), 23 years before the first English translation of the Rosetta Stone. However, it was contested by scholars who saw the inconsistencies in the asserted translation of Facsimile 1:

Dr. Arthur Cruttenden Mace, Assistant Curator in the Department of Egyptian Art in New York’s Metropolitan Museum of Art, wrote the following in 1912:

I return herewith, under separate cover, the ‘Pearl of Great Price.’ The ‘Book of Abraham,’ it is hardly necessary to say, is a pure fabrication. Cuts 1 and 3 are inaccurate copies of well known scenes on funeral papyri, and cut 2 is a copy of one of the magical discs which in the late Egyptian period were placed under the heads of mummies. There were about forty of these latter known in museums and they are all very similar in character. Joseph Smith’s interpretation of these cuts is a farrago of nonsense from beginning to end. Egyptian characters can now be read almost as easily as Greek, and five minutes’ study in an Egyptian gallery of any museum should be enough to convince any educated man of the clumsiness of the imposture.

Emotionally charged terms like “farrago of nonsense” undermine his objectivity a tad (although he’s certainly eloquent), but his criticism captures the general response of most Egyptian scholars to the book. The criticism stems from the fact that the book’s content doesn’t match the purported source material, and the “translation” of the facsimile also doesn’t match, instead fabricating an Abraham-centric story for the Book of Breathings.

The church’s essay on the Book of Abraham keeps an open mind about its apologetic approach rather than settling on any one theory. The 4 most common approaches to explaining the difference between the materials we have and the resulting book we call scripture are outlined in Kevin’s post, but two of them are mostly irrelevant:

A Mnemonic Aid. Nibley briefly preferred this approach to explaining the book, that the materials in the Book of Breathings were used as a memory trigger for stories transmitted through oral tradition. An ancient (or modern) storyteller would see the drawings in the Book of Breathings and would remember the stories about Abraham. This favor has largely grown out of favor, but you can read about it here and here. Proponents of the theory point to the fact that there is some relationship between the Egyptian and English, but that it’s not a direct translation relationship. A parallel is drawn to Aztec oral traditions using pictographic language:

An excellent example of a similar type of oral tradition was found among the Aztecs. It differed from the Hebrew oral tradition in that it was quite precise and utilized a memory aid or “mnemonic” device. This was in the form of a painting (codex), each symbol of which brought to mind a certain set of rote memorized phrases, which were passed down from one generation to another. Certain Aztec men had learned stories relating to various of these paintings. If one were to compare the oral recitation of one Aztec elder with that of another viewing the same painting, they would be substantially the same and, most often, identical renditions. (John A Tvedtnes)

No Relationship Between Papyrus and Book of Abraham. Nibley later theorized that the papyrus was valuable only in creating the temple rites, not directly in the translation of the BoA. But this still doesn’t explain away the “translation” connection within the BoA of Facsimile 1 or where the BoA originated; it just downplays the importance of the problematic papyrus.

The remaining two theories are those still favored by the church and by most LDS scholars:

The “Missing Papyrus” Theory. Nibley eventually preferred this explanation, and it is commonly used by apologists today. The one problem with this approach is that we have the Book of Breathings materials, and Joseph clearly saw a connection between that and the Book of Abraham that scholars demonstrate doesn’t exist. Because this was the original apologetic angle (while the materials were presumed lost in a fire), it’s one that ended up disappointing when the materials came to light in 1967. Apologists feeling gun shy about this one makes sense.

“Pure Revelation” Theory. This, combined with the missing papyrus theory, is the church’s favored theory in its recent essay, the idea that the papyrus and Egyptian materials provided a catalyst for revelation but were otherwise unnecessary and unconnected to the BoA’s content.

On the downside, this is contradicted by Joseph’s understanding of how he translated, but it is actually more consistent with his other translation projects–which he also misunderstood. There were several simplistic assumptions about translation circulated among early members of the church, including the idea that the documents were penned by Abraham himself (as opposed to copies of his stories passed down through others). Given the date of the materials we have, we know that they do not date to Abraham’s time, but are from the Greco-Roman era.

Once you allow for a “Pure Revelation” theory using the materials as a touchstone or catalyst, whether the materials match or not becomes irrelevant. A great theory for apologists, one that is consistent with the Book of Mormon translation process in which Joseph seldom looked directly at the plates. Both translations were written in KJV language, another bone of contention with scholars, but this was the language familiar to the home-schooled Joseph as “scriptural.” My kingdom for a plain English translation, but that’s another post for another day!

Klaus Baer, from the Oriental Institute at the University of Chicago, was impressed by the Book of Abraham, and opined that if it had been rendered into standard modern English rather than King James idiom, it would have had every appearance of an ancient book.

The last, most obvious theory to detractors is that the Book of Abraham is utter fabrication, a work of pseudepigrapha, either a well-meaning but misguided religious devotional book, or the work of a charlatan. But this doesn’t adequately explain some of the content of the book, elements to the Abraham story that were not yet available during Joseph’s lifetime. A few of these elements:

Others can be found in the Maxwell Institute’s Traditions of the Early Life of Abraham. The church also points out the unique theological content contained in the BoA:

The church’s assertion that without the book, these unique doctrines would not exist is justification for canonizing the book in 1880. The Community of Christ does not recognize the book as canonical.

As for the problems with the “translation” of the facsimile, Kevin shares two credible explanations: 1) the facsimile is damaged, without question, and 2) historically, Jews adopted Egyptian iconography, reinterpreting it to tell Semitic stories. He cites 2 examples of the latter, including the story of Lazarus and the rich man which he traces from the Demotic Story of Setna through rabbinic splinter groups and into the book of Luke.

“In the Testament of Abraham, the vignette accompanying chapter 125 of the Egyptian Book of the Dead is reimagined in Semitic terms.  Osiris sitting on the throne of judgment becomes Abel; the Egyptian gods become Semitic angels; the scribe Thoth becomes the biblical Enoch.  So I posited as a possibility that, “As the vignette for chapter 125 of the Book of the Dead is to the Testament of Abraham, so are the Facsimiles to the Book of Abraham.” . . . if it was acceptable for Jews to adopt or adapt Egyptian iconography to their own purposes, making Abraham a Semitic substitute for Osiris, why would it not be acceptable for Joseph Smith to do the very same thing himself?

Interesting idea. In other words, if ancient Hebrews mistranslated Egyptian pictures and documents in storytelling, why are we so set on our modern, logical, character-for-character, single translation process? Our secular, scholarly mindset leads us to a “closed” perspective rather than keeping our options open when we deal with times not our own.

Charles Taylor, whose ideas I’ve been discussing here and here talked about a “closed” loop vs. an “open” loop, and that whether one religious or not, it’s possible to have either approach. A “closed” person seeks black and white answers, things are true or false, yes or no. An “open” person assumes there are facts unknown and that any single perspective is probably too simplistic.

Now it’s your turn to weigh in about the Book of Abraham.

Depending on your stance on the BoA, your opinion about what the church should do with it will vary. If you see it as an embarrassing fiction, debunked by Egyptian scholars, you might feel like the church should ditch it. Some are simply embarrassed by the astronomy in it and the easily mockable “Kolob.” Personally, I believe the church’s essay makes a strong case for the book’s doctrinal importance, and I have long been intrigued by the presence of non-biblical material in the BoA that wasn’t available to Joseph. There’s something to the book that can’t be easily tossed aside. Kevin’s theories are intriguing, but my own feelings about the value of the book predate my reading his thoughts. I’m not sure what the book is exactly, but ultimately, I believe it’s a valuable addition to our canon from a doctrinal perspective.

[1] From Kevin’s article, the ownership of the materials followed this route: Emma sold to a private buyer named Abel Combs in 1856. It was believed that he had transferred the materials to the Woods Museum in Chicago and that the materials were lost in the Great Chicago Fire of 1871; however, a part of the materials had been given to Combs’ nurse Chrlotte Benecke Weaver Huntsman. Her daughter Alice Combs Weaver Heusser inherited them and tried to sell them to the Metropolitan in 1918, but they weren’t interested. After she died, her husband successfully sold the materials to the Metropolitan Museum in NYC in 1947. The museum was aware they were associated with the Mormon religion from the beginning, but they did not inform the church until the 1960s at which point, the church undertook to acquire them.

25 thoughts on “Book of Abraham, Essay & Approaches (plus poll)”