Today’s guest post is from long-time blog favorite Mary Ann. You can read other posts from Mary Ann here and here.

Why I Hated My Landlord

A couple years ago we moved into a rental. The house perfectly fit our needs: family-friendly neighborhood, well-respected schools, decent commute, and relatively low rent allowing us to save for a down payment. When we’d been looking it was a landlord’s market, which meant slim pickings and high competition. I was horrified when I first saw the condition of the house, but my husband pointed out that most of my concerns were cosmetic. A little elbow grease would fix it right up, he said. There was another prospective tenant ahead of us in line, but she was insistent that the landlord fix several issues before she’d move in. The property manager told us that if we were willing to accept the condition of the house as-is, the landlord would pick us over her. There was a very low probability we would find something better, so we agreed.

I figured if the landlord hadn’t cared about the poor maintenance from previous tenants, we’d have some latitude to work with. I was wrong. It seemed that every minor change we made caused problems. Items that had never bothered my previous landlords suddenly were mortally offensive. For example, replacing small fixtures that didn’t work was apparently not okay, and we had to promise to put back the non-functional fixtures at the end of our lease. I wasn’t wild about the stuff they did either. The improvements and quick fixes they did were of questionable taste and questionable quality. The landlord sometimes felt the property management company was too expensive, so she’d send her husband over to fix stuff without any notice.  Every little thing over the course of the two years just reinforced the truth: This might be my home, but this is her house.  I knew that I technically didn’t have a right to say what should happen with the house, and it was frustrating. The insecurity led to a sort of paranoia – “Fantastic. What’s she gonna do this time?” I never actually met my landlord or even talked with her on the phone, but I knew I disliked her intensely. When I left it was hard to leave the neighborhood, the schools, and the ward, but it wasn’t hard to leave that house. I desperately wanted my own house, where I could have the final say in what happened in my home.

Life in the West

In Angela C’s “Are Mormons Anti-Modernists?” post at By Common Consent, MattG referenced Colin Woodard’s American Nations: A History of the Eleven Rival Regional Cultures of North America. Woodard’s book is a variation on Joel Garreau’s 1981 The Nine Nations of North America. Each book argues that to truly understand the political conflicts in this country, you need to understand how people in different regions vary in their experiences and ideologies. While each uses different terms to describe the culture of the American West (“Far West” in one, “Empty Quarter” in the other), the geographic boundaries are almost identical. In each case the region covers the Great Basin, Rocky Mountains, and Western Plains. It encompasses just about the entirety of the old Mormon state of Deseret.

Woodard theorizes that “Far West” libertarianism and suspicion of large institutions (including the federal government) is due to how the region was tamed. The harsh, sometimes inhospitable climates “could be made habitable only with the deployment of vast industrial resources: railroads, heavy mining equipment, ore smelters, dams, and irrigations.” These were directed either by large corporations on the coasts or by the federal government. “The Far West’s people are often resentful of their dependent status, feeling that they have been exploited as an internal colony for the benefit of the seaboard nations.”[1]

Garreau’s description of the “Empty Quarter” goes in a slightly different direction, but he also cites environmental factors and a general feeling of helplessness: “It’s incredibly rich in energy resources. It has dozens of times more energy than the Persian Gulf will ever dream of. And it is, in fact, very empty. Very few people live here, and as a result it is politically powerless. This is the last “colony” of the nine nations. The idea is that we are going to chew this up and spit it out to get us into the next century. But there is one hitch. This is also the place that has the last great stretches of wilderness and quality-one air; so, if we chew this up and spit it out, we can kiss the Rockies goodbye. And of course there is a political context to that too, because there are a lot of people who don’t want to see that wilderness despoiled.”[2]

The Government as Landlord 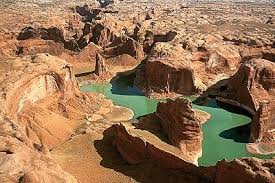 The federal government still controls a significant portion of the American West. It owns about half (46.9%) of all land in the Western United States[3]. The federal government also owns 61.2% of Alaska (Alaska is included in both Woodard’s “Far West” and Garreau’s “Empty Quarter”). In the remaining portion of the lower 48 states and Hawaii, the feds only own 4% of the land[4].  Westerners have little say in many ways with what happens in their lands. The insecurity, that feeling of being pushed around by entities far away, very much contributes to a sense of paranoia that fuels libertarian angst. The anger becomes even worse when a powerful government official in Washington D.C. single-handedly destroys the livelihoods of many Westerners. I’ll share two examples.

Example 1: In the early 1970s, President Nixon used executive powers to impose wage and price freezes in an attempt to combat rising inflation. Associated with that was the elimination of tariffs on oil and meat imports to drive down prices. Those actions were catastrophic to the cattle ranching industry, a major force in the West. The beef industry calls it “The Wreck.” It caused a severe crash in the cattle market and dramatic herd reduction.[5] My family was directly affected. My grandpa was a newly retired cattleman, an excellent businessman with solid investments that would fund a well-earned retirement. The collapse in the cattle market nearly bankrupted him. Despite returning back to the workforce, he never recovered financially. On a wider scale, Nixon’s actions galvanized an emerging libertarian movement, and drove a young Ron Paul into politics.[6]

Example 2: In September 1996, President Clinton used executive powers to designate 1.8 million acres of southern Utah as the Grand Staircase-Escalante National Monument[7]. The announcement came at the Grand Canyon National Park in Arizona. It was a complete shock to Utahns. Utah’s governor and congressional delegation had only received 24 hours’ notification of Clinton’s imminent declaration. Legal challenges were worthless; the Supreme Court has always supported the president’s nearly unlimited discretion under the Antiquities Act. Environmentalists were thrilled that a proposed coal mine on the designated land was blocked. Many Utahns could only see the lost economic opportunities[8]. Almost two decades later, the anger is still strong. An Idaho newspaper interviewed residents of Escalante, Utah, in 2014 in anticipation of a possible national monument designation in that state: “It’s just a d— poor deal,” said 85-year-old Arnold Alvey, a lifelong Escalante resident. “I can’t see that we’ve gained one d— thing. All it’s gained for us is a bunch of these federal marshals in here, telling us we can’t go here, we can’t go there.”[9]

It could be water rights or property rights. It could be about environmental concerns prioritized over local industries. It could be the frustration of being part of a tourism industry dependent on federal lands, with partisan bickering in Washington D.C. governing your fate. It could be the perceived nuisance of getting federal permission to use land your family has accessed for generations. It could be the fear of government officials taking away your private property. Whatever the reason, many Westerners feel they’ve lost control over the lands they call home.

[8] An act of Congress in 1998 finally compensated the state of Utah for the mineral rights and trust lands lost (lands designated to help fund public education).

26 thoughts on “The Government vs. The West”