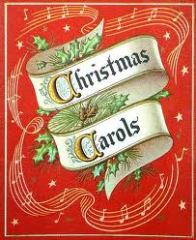 “What would Christmas be without a Carol?” was a line from one of the songs in a BBC R4 festive musical drama I listened to as a child together with my siblings. Initially regarded as wholly secular, and stamped upon by the puritans and given new life by the Victorians, carols and other Christmas songs are now to be found in churches as well as in schools, public houses and streets. Carols are a large part of the Christmas season, as a pre-recorded backdrop in stores, or a Salvation Army band in the public square. A list of favourite carols and their histories can be found here. The use of local folk tunes sometimes, means that some carols have more than one tune, though the carol with the most is “While Shepherds Watched”. I grew up listening to the BBC’s Festival of Nine Lessons and Carols broadcast every Christmas Eve. I love listening to Christmas carols, singing them and playing them.

I wasn’t aware it’s St. Francis we have to thank for our tradition of nativity performances with narrative songs, tunes co-opted from popular drinking songs of the time. I recall my excitement the year I was to play Mary for my Junior School nativity play. I was 7 years old. It was to be performed in the local parish church, complete with a real donkey for me to ride. Unfortunately, I came down with a bad case of flu, the honours went to my understudy, and it was the closest I ever got to a starring role. I still remember with wonder the amazing musical nativity performance given by the oldest children (10 and 11) at my Junior School, incorporating numerous songs (including this Joan Baez number), and having the angel Gabriel appearing on a platform from behind a curtain at the side of the hall. I remember participating in and later watching nativity performances at church*. One of my brothers had a lovely singing voice, and for several years played the part of one of the wise men, getting a solo verse of “We Three Kings”. And then there are carol concerts and carol services**. As I got older I’d participate in concerts by my youth orchestra, choir and concert band, which I loved.

Now it’s my kids turn. Younger, they were stars and angels. Yesterday evening however, we headed out to the cathedral for our annual school Christmas concert. The acoustics are great, and this year my daughter took part in some amazing brass performances: Leroy Anderson’s arrangement of “In Dulci Jubilo”, Martin Cordner’s “The Everlasting Light”, John Iveson’s arrangement of “We Three King’s” (with timpani to stop your heart), and Premru’s “Blues March” with lots and lots of trumpets. The Junior Choir (7-10 years old) sang Mack Wilberg’s arrangement of “Still, Still, Still” accompanied by piano and strings, and the senior choir John Rutter’s “Nativity Carol” with orchestra, and a lot lot more. It was a great evening.

In a world of fractured or separated communities however, it sometimes feels like there’s a surfeit of concerts and services to choose from. It can be impossible to attend them all. The pull of school, on the one hand, which can still be, though not as often today, linked to the local parish or diocese for Christmas celebrations, and then our own church festivities. Our ward Christmas party is this weekend, and will involve some singing of carols. Growing up attending the stake events was easier; the stake centre was my local building. But we won’t make it to our stake carol concert this Sunday, which is 40 miles away, and I feel sad about that.

* We seem to have lost this nativity tradition at church in recent years.

**The difference between the two appears to be down to certain legal technicalities differentiating a performance (concert) from a service (worship), and the licenses required.

Picture attribution: Cover of 1920 Christmas song book from collection of goddess of chocolate on Flickr

3 thoughts on ““What would Christmas be without a Carol?””