If Facebook is any indication, Americans are becoming even more politically polarized over the current budget deficit debate.  Each side seems to feel strongly that the other major political party is to blame. 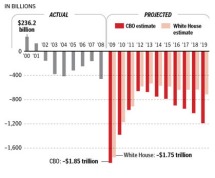 Both parties blame the other for being unwilling to compromise on a solution.

Some view it as the main role filled by the president and hold Pres. Obama directly responsible (or past presidents).

The American people are also to blame, for our poor planning and bad spending habits.  How can we expect our politicians to do better on a macro scale than the average American has done on a micro scale? 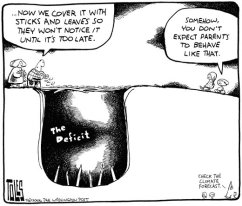 In true American fashion, let’s take it to a vote.  Sorry, but you are only allowed to choose ONE answer on this one!  I know that’s a pain, but pick a side!  Defend your choice in the discussion below.

38 thoughts on “Who’s to Blame for the Currently High Deficit?”