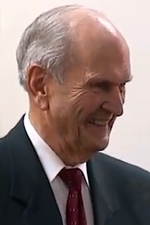 There have been three responses to President Nelson’s recent discussions of the proper name of the Church and how other names serve or please Satan and offend God.

That results in several different approaches.

“Help.  My ex-Mormon husband has been quoting President Nelson and insists that what he is saying about the name of the Church is an admission that all of the prior prophets and the institutional Church were all serving Satan. He calls the Church of the last 150+ years a victory for Satan.

He keeps claiming that I can’t be rational to believe that they’ve quit giving victories for Satan now, and can’t trust anything that servants of Satan have said in the past.  If they couldn’t get this much right, he claims I shouldn’t trust the Church for anything.

I asked my Stake President for help, and he was just a deer in the headlights.  I’d write Salt Lake, but they just send letters back to the Stake President and he has already been unable to help me at all.”

In principle, the idea of emphasizing a Church’s full/original/”true” name and de-emphasizing that Church’s nickname(s) seems reasonable enough. I can imagine any number of reasons why a Church might want to do that. But some arguments for such a change raise more questions than they answer.

Which of the following three statements comes closest to capturing what you understand President Nelson to be saying when he argues that Latter-day Saints should stop using the term “Mormon” because its use “offends” God and pleases Satan:

1. God was totally fine with His past prophets using the term “Mormon” — from Joseph Smith’s embrace of the term to Gordon B. Hinkley’s “I’m a Mormon” campaign — but for some reason that hasn’t been explained, He started being offended by the term (and Satan started being pleased by the term) in the 2nd decade of the 21st Century, just in time to inform His prophet about this, the very same prophet who, coincidentally, was on record not liking use of the term 30 years earlier.

2. God has been offended by Latter-day Saint use of the term “Mormon” to describe the Church (and its adherents) since the early days of the Church — this isn’t new. He just chose not to reveal His feelings on the matter until 2018, for some reason that hasn’t been explained, allowing His prophets to promote use of the word — and presumably please Satan in the process — for well over a century.

3. God has been offended by Latter-day Saint use of the term “Mormon” to describe the Church (and its adherents) since the early days of the church — this isn’t new. He tried to communicate His offense to His past prophets, but was unsuccessful, with the result that Satan was pleased with the “I’m a Mormon” campaign (for example) while God was mortified by it. But once President Nelson took the reins, God was finally able to get His message through.

Which of these comes closest to what you think President Nelson is saying? This is a serious question.

What do you think: