Tobias Funke is a character on the TV series Arrested Development who constantly says things that have a double meaning, but without recognizing that there’s a double meaning. Often in online groups, people will post statements or pictures, particularly things done by BYU, that suffer the same problem: unintentional double entendre. A few of Tobias Funke’s most famous lines:

The latest one occurred last week when BYU-TV decided that the cleavage shown in Sense & Sensibility was simply too much for their pearl-clutching censors[1], so they blurred out the women’s chests:

The result looks positively pornographic. One commenter re-captioned it “They’re real, and they’re spectacular,” a reference to the Seinfeld episode in which Jerry is convinced his girlfriend Sidra has had a boob job, and he sends Elaine into the sauna to determine if she has. Elaine accidentally trips and falls on Sidra.

One reason these Tobias Funke moments keep happening is the utter innocence of those in charge of making these decisions. Accidental double entendre happens when only the innocent interpretation occurs to you, or in other words, it takes a dirty mind to prevent it.

“I saw 9 dolphins”: This is the phrase one uses when another party in a conversation makes a dirty joke and one doesn’t get it.
It originally comes from the 9 dolphins optical illusion. Research found that children could not recognize the intimate scene of the couple because they did not have the prior memory association with such a scenario. Therefore, instead of seeing the couple in an intimate pose, they saw 9 dolphins. I won’t link to the photo here because unless you are a child, it really is a very sexual picture. You can probably Google it safely from work, though, because there is a rum that uses the image on its label.
But Her Stomach Was Covered!
I recently read a post by James the Mormon’s girlfriend Lindsay who is a model. She says she is often accosted by church members to talk about how she could be a model and also be modest. (Her simple answer: she couldn’t, at least not by Mormon standards of showing no shoulders or thighs). She did set specific standards for her shoots, though, and she steadfastly stuck to them, even despite significant pressure: no lingerie, no sheer, no semi-nude, no nude, no alcohol or smoking, and no khakis! Looking back on her career with her mother, who had been her staunch supporter and ally throughout the process, she said she had no shoots she regretted.
Her mom disagreed, slightly. There was one shoot that gave her pause.

My mom, totally supportive and proud, lightly said she kinda sorta wished I could take back that “child prostitute shoot.”

That child WHAT shoot? When the heck in the world did I do a child PROSTITUTE shoot? My brain raced for any memory of participating in something so disgusting and deplorable. Lovingly my mom reminded me of this shoot.[2]

The shoot took place in a dilapidated motel on Coney Island.  The room consisted of four bare and heavily stained twin mattress stacked two deep and shoved in a corner. There was one bashed up wooden chair and a dead rat behind the broken radiator. Luckily someone brought a flat bed sheet to cover the mattresses to create a barrier between me and the cockroaches crawling inside them. The photographer rented by the room by the half an hour and there was a communal toilet (no sink) in the hall. I was 16 years old. Call me naive, but it had never crossed my mind that prostitution motels even existed.

I just thought they picked the location because it looked different.

As the makeup artist rouged my cheeks, I eyed my wardrobe for the shoot. Nothing looked more revealing than a one piece swimsuit. As the stylist laced up a vintage Dior leotard (read: corset) I felt relieved. I wouldn’t have to push back or defend myself today. They posed me and coached me. The shoot went off without a hitch. The strangest part to me was the crew insisting I rub hand sanitizer on my body every time I got off the bed or floor.

It wasn’t until years later, with the help of my caring mom, that I understood what I was depicting that day. Child prostitution is one of the lowest and most vile institutions on this earth and at the hands of a room of adults, I, a child, glamorized it. While it may seem silly to some, this shoot introduced a immense sense of shame and pain (rhyming unintentional) into my life for quite some time.

But of course, as a child herself, she didn’t have the sexual experience to understand why that shoot was being staged the way it was, or what the context was. She was too innocent to prevent the image from being created. Which brings us back to the flaw with putting clean minds in charge of censoring words and images on behalf of BYU. Because they don’t get it, they actually make things much worse by censoring them than the things were to start with!

One BYU-Idaho picture showed a man hiking wearing tan shorts, to illustrate a returning student facing “mountains” of homework, but because BYU-Idaho’s dress code prohibits shorts, his legs are blurred out. 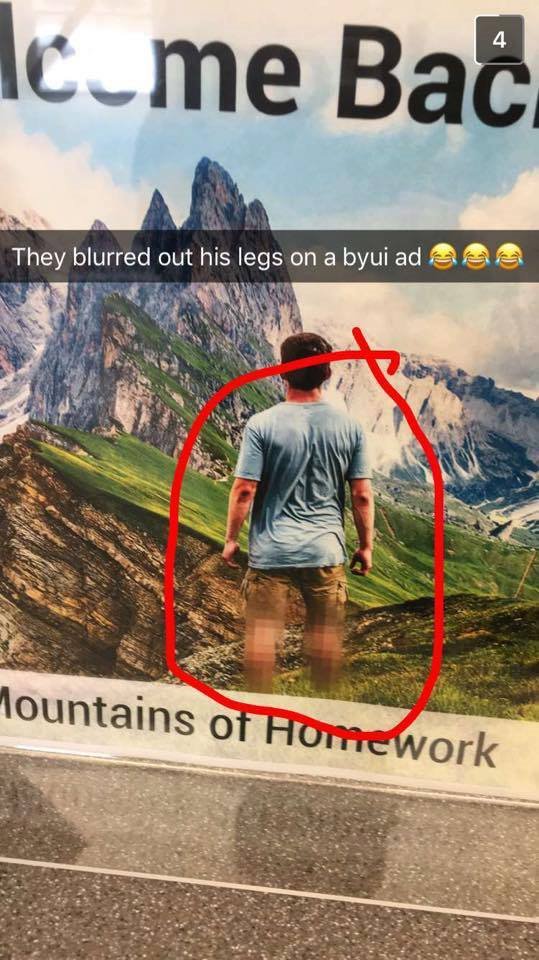 This makes him look pantsless! This prompted the following joke article in the Sunday Pews:

In another great moment, a BYU captcha to determine if a respondent is human or a bot, this happens:

The 3rd question says: BYU has a mascot. Perhaps you’ve seen it. It’s big and it growls, and its name is Cosmo. Cosmo is supposed to be a type of cat, also known as a puma or a mountain lion. But here at BYU, we use the “C” word . . . ” Say what, now? The “C” word is a common short-hand for a vulgarity used for female genitalia. Is it really possible that the person who wrote this didn’t know that?

At this point, I’m almost starting to wonder if there’s a Little Mermaid artist infiltrating the BYUs. [3]

An early modesty poster at BYU instructed women that their skirts needed to reach their knees.

Unfortunately, it sounds a little like “get on your knees,” which has a sexual meaning, but in fairness, they did say “please.” Then again, please kind of makes it worse. [4]

Do you think this is a self-amusing saboteur’s handiwork? Or do you think this is just babes in the woods being given the keys to a car for which their feet don’t yet reach the pedals? Either way, I can only hope they keep it up. It’s comedic gold.

Are there other examples of accidental double entendre that you have encountered?

[1] Come to think of it, clutching your pearls should also be blurred out due to the proximity to bosoms.

[2] Go to the article to see the photo in question.

[3] See also the Beatles song “Please please me.” Or go into any Chik-fil-a where they are constantly talking about their pleasure.

[4] Snopes disagrees there’s a phallus in the palace. Personally, I think it’s just a normal feature of Mermaid architecture of that era.