My dad came straight out of Compton (it was his high school) and ended up a prison chaplain (unpaid) for a while.  Amazingly, he was recruited to pastor a church, and surprisingly, they didn’t mind that he was LDS.  He just didn’t feel comfortable taking that on as well.

One result is that I’ve been planning a post on how to become an LDS chaplain.  But I’ve had trouble with it, and I realized that the reason is because I have unresolved issues due to chaplains I have known. 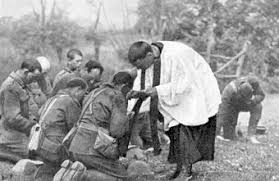 My family was military (enlisted, Air Force) and in the military, chaplains generally avoid hardship tours of duty and gripe about how the Catholic Priests get all the promotions.

Of course, the priests do hardship tours of duty while the other chaplains are avoiding those.  Many LDS Chaplains lead the way in complaining and in practices such as requiring enlisted men to stand at attention and answer “Yes Sir” and “No Sir” while receiving pastoral counseling.

[Now, I’m aware of better LDS Chaplains than that.  I’ve a niece married to one whose only active tour of duty was a hardship tour.  But until I was older than dirt, that wasn’t my experience.]

Outside of the military, my most remarkable meeting with a chaplain was at Dallas Children’s Hospital and involved my daughter Jessica (the first of my three daughters who died).  They were running tests, expecting bad news and sent the chaplain to talk to us before they met with us.

It was an interesting meeting.  He had an undergraduate and a doctoral degree in theology.  He had pastored a congregation.  He was in chaplain training because nothing had prepared him to deal with human suffering and he was quite bitter at the holes in his theology.  I obviously was under some strain, but I did my best for him as he unloaded his disappointment, bitterness and angst on me.

He then asked if he could observe my wife and I as we received the news that our daughter wasn’t going to make it [Yes, that is how he broached the topic of the expected bad news] as he thought he could learn something from observing someone take that sort of news with good grace.  I told him that was probably too much for me at the moment. [The news was actually good, though, as everyone knows, the story still had a disastrous ending]. When people talk about graduate school level training for ministers and pastoral training for chaplains and how that would make things better, I think of him.

I met his boss, briefly, on another visit, when Robin was in the hospital.  She was busy and blew me off, since she was preparing the chapel for a service (that no one attended).

I confess that did not impress me any better, especially given just how good the hospital was.  If the best regional hospital in the area, with a well regarded chaplaincy training program had someone at the head of it like that, heaven help those who were down stream.

However, I loved my dad, and his time he spent serving as a prison chaplain for people in California prisons serving life without parole and the things he had to say about the service, made me think.

I’ll probably not become a chaplain, but you might want to.

That last question is a trick question since as I’ve gotten older I’ve met some wonderful chaplains whom I greatly admire, and not just my dad.

16 thoughts on “Straight out of Compton to Chaplain — Part One”