I’ve been reading Antifragile: Things That Gain from Disorder by Nassim Nicholas Taleb. It’s about the problems with systems that appear to be peaceful or stable.  Fragile systems appear placid, but when an unforeseen event happens, it can be catastrophic, whereas robust systems appear more stressful and unstable but are actually more resilient when something unpredictable happens. Since we can’t predict things that are unpredictable, such as the impact the internet on how we gather information, we should instead stay attuned to evidence that the system is fragile or essentially too quiet.

The comparison is made between two siblings: one in a seemingly stable corporate job, the other a taxi driver. The sibling in the corporate job seems to have a low-risk existence, steady income, and predictable paychecks. The sibling who drives a taxi seems to be always dealing with unpredictable problems: lower or higher fares, risks of dealing with the public, seasonal ups and downs, car maintenance, traffic. And yet the taxi driver also has the ability to adjust in real time to market factors due to more direct engagement with her customers. If she’s not getting fares at the airport, she can try the port. The sister working in a corporate job, by contrast, is insulated from these market fluctuations behind her desk and steady paycheck. If the market goes up or down, her paycheck stays the same. And while it would seem that she has more security, what she also has is vulnerability to a catastrophic event such as a layoff.

We can’t avoid catastrophic events. We can only increase our ability to weather them by reducing their impacts should they happen. And the starting point is determining that a system or organization is fragile. Peaceful systems that appear to be free of conflict are the most fragile there are. Human beings should have conflicting viewpoints; ideological clashes are normal. Lack of disagreement is most often a sign of repression or disengagement. The most tightly controlled, predictable environments are the most fragile. I don’t know about you, but the Gospel Doctrine classes I’ve been attending are pretty doggone predictable, and thanks to correlation–very controlled.

Since the inception of the bloggernacle I’ve heard (and experienced firsthand) that teachers who use non-correlated materials or ask too many off-script questions are often removed from teaching assignments. We prefer to ask the same questions and get the same answers, over and over, every 4 years, lather, rinse, repeat. It’s not always like that; some wards are better than others at bringing questions to the surface, but the correlated curriculum is particularly designed to ask the questions it wants answered, not the questions people might ask in a more direct engagement with the text. And when we suppress that engagement, we are creating fragility.

What makes the species prosper isn’t peace, but freedom.

Without that freedom to think and discuss, people disengage and don’t build the skills necessary to handle challenges in the future. In his essay, Sam explained:

Testimonies aren’t built on assertions, but on subjective experiences with which we struggle to derive meaning. As Steven Peck put it in his book Science the Key to Theology:

Anyone who knows me knows I change my mind almost constantly, and by the time this book comes out I will have a new set of questions that I am exploring and playing with. This is not to say I have no core of beliefs. I do, but I must admit that they are not rationally derived. They come from experiences that have come to me subjectively placed in my heart, and it is these that I hold onto dearly.

Failure often offers the most insightful commentary about the system because it exposes the misunderstandings and mistakes in our theories.

In a system such as church classes in which the questions and answers are pre-scripted by correlation, those misunderstandings and mistakes–those system failures–are hidden under a veneer of peacefulness and passive engagement. Like a Gregorian chant, the questions are put forth, and the predictable answers are chanted back.

When a system is too peaceful, small problems accumulate and are more catastrophic than they might be if they were openly discussed when they are small. The system would then self-correct and deal with that new information. For example, much has been made of the church’s need to address gaps in members’ knowledge of history due to simplified narratives in the curriculum that are inaccurate. If we were having more free-form discussions in our classes, individuals would be better equipped to handle new information because they would be used to challenging ideas and concepts. In the bloggernacle, this is often referred to as inoculation. One dictum could be “lack of inoculation leads to disaffection.”

Small forest fires periodically cleanse the system of the most flammable material, so this does not have time to accumulate. Systematically preventing forest fires from taking place “to be safe” makes the big one much worse. For similar reasons, stability is not good for the economy: firms become very weak during long periods of steady prosperity devoid of setbacks, and hidden vulnerabilities accumulate silently under the surface–so delaying crises is not a good idea. 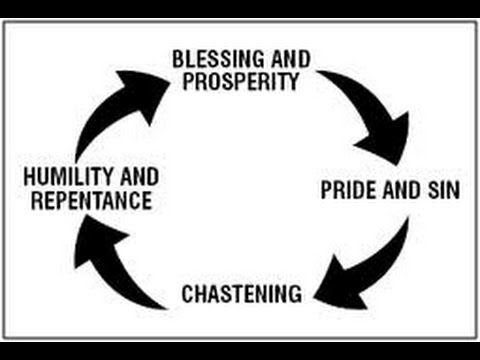 One thing that has always bothered me about the CES Letter that has made the rounds (aside from its resemblance to a faithful dog that leaves hideous carnage on your doorstep and expects to be recognized as a “good hunter”) is that it simply lists a litany of flaws with various church teachings, but it is addressed to a CES Director as if it is up to the Church Education System to answer these questions. That’s a byproduct of a fragile system, one that appears to be peaceful only because everyone goes quietly along, keeping things “safe,” while not having the smaller discussions as we go. People at the bottom expecting top down answers are evidence of a fragile system, one in which little is expected of them, and disagreement is not open or welcome. Instead of small forest fires, the CES letter represents an accumulation of flammable material, one that has consumed many trees (both literally and figuratively). A system that is too peaceful with too little disagreement breeds literalism and lack of thinking skills; we assert (which is easy) rather than grapple with (which is challenging) our faith. We go along thinking all is well in Zion, pacified by the stability.

Perhaps the pride cycle described in the Book of Mormon works like the forest analogy. Often, we interpret it as a cautionary tale about the downfall that comes when a society achieves wealth. In light of antifragility, the pride cycle describes what happens to a system that appears too peaceful. Eventually, an unforeseen event causes it to crash. Rather than blaming the catastrophic event or the “pride” of wealth, antifragility would teach us to be wary of too much peace, too little disagreement, too much correlation, and not enough small disputes.

When you avoid the little skirmishes and congratulate yourself on the lack of conflict, the eventual war can be devastating.

*This is a modified reprint from a post I did on BCC.

15 thoughts on “Is the Church Fragile or Anti-Fragile?”