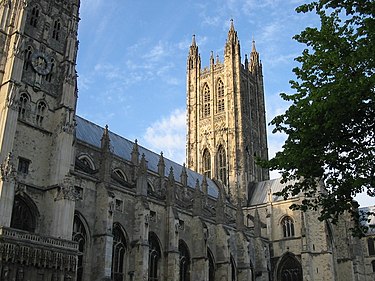 At the same time the LDS church seems to be doubling down on it’s position vis a vis gay marriage and the new policy, brandishing the big stick by belatedly describing it as revelation, whilst failing to go through the expected channels to present it as such, the Archbishop of Canterbury this week oversees a meeting of Primates, leaders of the global Anglican Communion, in what has been described as “a make-or-break meeting in Canterbury, where the bitter divides over gay rights and same-sex marriage are expected to dominate discussions” (BBC). The Episcopal church in the US consecrated a gay Bishop back in 2003, whilst leaders in many African nations regard any softening towards acceptance as a depravity, and a departure from “discipline and Godly order” (BBC).

Suffice it to say it is not only in the LDS church that things are coming to a head over this issue, where liberal and conservative factions are each calling the other to repentance.

“More than 100 senior Anglicans have urged the Church of England to repent for “discriminating” against lesbian and gay Christians. The demand is made in a letter to the Archbishops of Canterbury and York ahead of a meeting of 39 primates from the global Anglican Communion.

Nevertheless, I can’t help but feel that I prefer the looser ecclesiastical structure and opportunities afforded dissenting voices to come together and be heard over the stiflingly opaque, and high-handed manner in which the issue is being addressed by LDS top leadership. The greater transparency also draws perhaps much-needed attention to the difficulties in steering a global church.

In his opening address on Monday, Justin Welby, Archbishop of Canterbury, spoke of Christ addressing fear with a message of peace, and the mission of successors of the first apostles in particular to “to proclaim the good news of the Kingdom of God, to make disciples, to know “nothing except Jesus Christ and Him crucified””. He addressed troubled history, something to be found in all faiths, thus:

“We are all the heirs and beneficiaries of courage, of loss, of suffering and of martyrdom, of wars of independence and conquest, of the search for freedom and of others who have used the church for repression. They all shaped the way we think and feel, and our history influences how we deal with crises.

“As I say that history contains much sin. Often faith was the servant of Empire, and carried in its baggage racism, oppression, contempt for those they met…

“Yet, through it all, God was faithful.”

He spoke of a need for unity in love:

“All of us here need a body that is mutually supportive, that loves one another, that stoops to lift the fallen and kneels to bind the wounds of the injured. Without each other we are deeply weakened, because we have a mission that is only sustainable when we conform to the image of Christ, which is first to love one another. The idea is often put forward that truth and unity are in conflict, or in tension. That is not true. Disunity presents to the world an untrue image of Jesus Christ. Lack of truth corrodes and destroys unity. They are bound together, but the binding is love. In a world of war, of rapid communications, of instant hearing and misunderstanding where the response is only hatred and separation, the Holy Spirit whose creative and sustaining gifting of the church is done in diversity, demands that diversity of history, culture, gift, vision be expressed in a unity of love. That is what a Spirit filled church looks like.”

And raised four points to be considered in “making the church more ready for action, as a body around the world“.

“First, by dealing truthfully and lovingly with each other. … We will not find a way forward, a reconciling, either by avoiding issues or by aggression and power games. True reconciliation is based in truth, and in peace, as Jesus sends us in peace, which means a harmony of heart, even if there is divergence in view. There has never been a time when the church was one in view, but it has often been one in heart.

“Secondly, by a deep focus on Jesus Christ, in our worship, in our meditations…

“Thirdly, by being decisive and clear, even if we cannot agree.

“Fourthly, because we are sent, by being outward looking. Every time we act or conclude an action we must ask ourselves, will this lead a world of lostness nearer to Christ Jesus and His salvation. Even when we disagree, even if we decide we must walk separately, we must not in the way we do that imperil the salvation of one person outside this room.”

What might we learn from the Archbishop’s address, and the meeting this week?

17 thoughts on “This Week In Britain: SSM and the Anglican Communion”