I’m addicted to exercise.  And by exercise, I mean sarcasm.

An article about sarcasm recently explained why sarcastic people are smarter on average:  because sarcasm requires more mental effort than just plain speech.  Which is probably why when someone fails to grasp it, my first instinct is to think they are too stupid to follow.  They probably are!

See, that’s how sarcasm works, and why it’s correlated with intellect. It’s a two-step process. To use, and detect, sarcasm, you need to grasp not just the scenario in front of you – but also aspects of that scenario that might be lacking.

As Richard Chin of Smithsonian writes, sarcasm requires a series of “mental gymnastics.” Sarcastic, satirical or ironic statements all compel the brain to “think beyond the literal meaning of the words and understand that the speaker may be thinking of something entirely different.”

Thus, in a way, sarcasm forces us to think one step ahead

If that sounds mean, bear in mind that sarcasm is inherently aggressive.  Mormons tend to be more passive-aggressive than aggressive-aggressive, and sometimes they mistake directness for sin (specifically contention).  Growing up outside of Philly as I did, people were just more verbally direct.  That sounds aggressive to people from the west who are much more oblique in their communication style.  We were in south Philly several years ago, part of my effort as a parent to expose my kids to different cultures, and we stopped in a cafe to get a cheesesteak.  At the checkout, there were wrapped brownies lined up on the bar.  Each one had a hand-lettered note on the front that said “YOU TOUCH IT, YOU BOUGHT IT.”  My daughter was scandalized and thought it was so rude.  I said, “What rude? They don’t want you to touch it.  So don’t touch it!”  You can take the girl out of the Northeast, but you can’t take the Northeast out of the girl.

What is “heated” anyway?  My husband thinks setting the thermostat on 74 is sufficiently warm.  I need to wear a jacket when it’s set on 77, and he’s sweating.  Maybe that’s why they say “If you can’t stand the heat, get out of the kitchen.”  Some of us like heat I guess.  Or maybe we just have poorer circulation.  Or aren’t wearing socks.  What’s heated to me isn’t what’s heated to you.  “You touch it, you bought it” isn’t rude to me.  In polite society, you should keep your damn hands off other people’s brownies.  Yes, I’m talking to you.  The shopkeeper is fostering good citizenship, protecting your and my theoretical brownies from being manhandled by random strangers.

While you may think you’re being clever, there’s a good chance you might end up being the only one laughing. That’s the risk you take every time you decide to speak tongue-in-cheek.

For that reason, always substantiate the “sarcasm-gauge” of those around you. As much as sarcasm is linked with, and can be easily detected by, smart people – keep in mind, the world is full of stupid people who won’t always appreciate your snide quips.

It’s a wise caution perhaps, but that doesn’t mean I’m going to let myself (mentally) go to pot just because there’s an obesity epidemic in this country.  I’ll pass on the mental Krispy Kremes.  Bring on the snark.  If you don’t “get” snark or sarcasm, I can see why it would make you uncomfortable.  You might be missing what’s missing.  You may think they are saying one thing when they are saying something entirely different.  Case in point, several commenters took exception to my recent post on Sis. Burton’s talk at General Conference, including this budding armchair psychologist:

I feel sad that when I read this the tone that comes off is hurt… for whatever reason you’re hurt and you want to hurt others. You’re just mean.

I had mixed feelings about Sis. Burton’s talk, but it hardly merited the condescending, sarcastic response given in this post.

I thought Sis. Burton’s talk was excellent, and thought this post smacks of light-mindedness.

New Iconoclast came to my defense:

I think Angela’s snark can be taken too easily as criticism, when it is actually a very dry wit – a problem I frequently have myself. At times I’ve resolved to be more clear by being unambiguously nasty when I mean to be critical, but this carries some negative consequences as well. 😉 I haven’t found the ideal compromise yet. 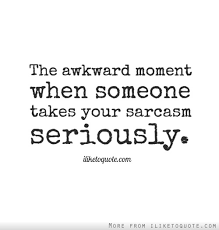 First of all, I think Sis. Burton seems like a really nice woman.  She has some great qualities, chiefly that she doesn’t use Primary voice. That alone puts her in the top 20% of female Mormon leaders. She also has an intelligent face.  I could see her being a Sudoku wiz.  I also like that her husband’s name is Craig.  I’ve never met a Craig I didn’t like.  Yet.

I have no beef with her, but her talk also had limited beef. And why is that?  Because we’ve gotten so tied up in gender roles and family that we’ve lost the conversation somewhere.  I did think her string story was excellent commentary on not only fatherhood, but our paternalistic attitudes within the church, perhaps accidentally so.  And I absolutely believe she intentionally followed the pattern of male church leaders in how she spoke about her husband, which I pointed out by calling her talk “boy crazy.”  Now was she actually being subversive and feminist?  Well, I wish she were, but I doubt it.  Either way, how is praising the opposite sex, regardless of who is doing it, talk fodder for a world conference?  I’ve always been baffled by that.  Seeing a woman do it points out yet again how silly it is.  We had two women speak in the general sessions of conference, and one of the two talks didn’t pass the Bechdel test.

[2] He also called people a den of vipers.  That’s pretty aggressive talk.  Plus, saying, “Thou hast said” and meaning “yes” qualifies in my book.