In January 2012, I did a blog post about topics women in the church were discussing.  I identified 10 practices that some women saw as unnecessarily discriminate or that were in other ways causing women to question their value in the church.  This was in response to a request Pres. Beck made of Mormon Mommy Bloggers (of which I am not one).  As Virginia Slims likes to tell us while promoting carcinogens:  “You’ve come a long way, baby!”  OK, not that long a way.  But “You haven’t stood still, baby!” isn’t going to sell ciggies.

I’ve heard the caution from those who are suspicious about feminism that if you participate in events like wearing pants to church, you’ll be promoting things that you may not believe in personally because the aims might be broader than your own.  Well, no duh!  Unity of thought is an illusion.  I’m not chasing after it.  But dialogue with diverse opinions is a worthy aim.  If I have 3 LDS feminist aims, they are:

If there are any church members who can’t get behind those three aims, I suggest you sit down and think it through and then come back.  These are not revolutionary aims, just practical, common sense ideas.

So, what’s happened in the 14 months since I wrote that blog post titled Ten Questions LDS Women Think About?  Quite a bit! 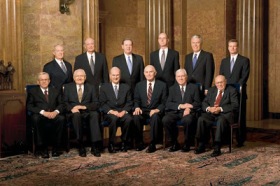 Here’s a quick scorecard of the Top 10 List from 14 months ago:

Bonus item:  YW manuals out of date. Improved greatly, but still preserved sexual stereotypes by writing the YW manuals passively and encouraging action and leadership from YM at the same time.

Second bonus item:  Advice to the young women to  marry young, that education is “nice to have,” that the husband as sole provider – only preaching the so-called ideal can have disastrous side effects. No substantial change, although I wonder if the mission age change will have downstream impacts to this.