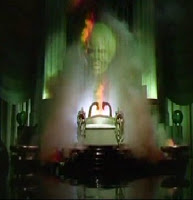 North Korea wants to show its strength despite its small size by launching missiles to intimidate China.  Napolean was said to suffer from “short man” inferiority complex, resulting in his military invasions all over Europe.  Some sources say Hitler felt inferior because his absent father was a Jew, not Aryan.  In the Wizard of Oz, the “wizard” knows he is not really a wizard, just a balloonist who hides behind a giant puppet head using scary sound effects to keep his subjects in line and to scare off the Wicked Witch of the West who has superior power.

Exposure anxiety is more than just a fear.  It is a belief that the failure to act in a manner perceived as firm will result in the weakening of one’s position. . . The tragic part of exposure anxiety is that it usually drives its victims to commit excessive force in order to appear extra tough.*

Examples in the church

There have been a few times in church history when leaders (or members) have used excessive force or hyperbole to bolster their authority or a weak position.  Use of excessive force intimidates others into complying through the implied threat of action against any who dare to oppose.  Hyperbole frightens people with overstated (natural) consequences if they don’t take the action they are told to take.

What are the risks of Exposure Anxiety?

When we don’t realize we are operating from fear of exposure and we use hyperbole and excessive force to bolster ourselves, either as an organization or as individuals, we become more vulnerable to the following side effects:

As an example of the 4th risk, we all know the story of the Emporer’s New Clothes.  Swindlers convince the vain Emporer that his new “clothes” are so beautiful and fine that they can only be seen by those who are truly special, people of taste and style.  All the courtiers agree the clothes are fine and beautiful because they don’t want to admit they aren’t special enough to see the fabric.  The Emporer heads a public parade to show off his finery, and a small boy  in the crowd cries out “Why is the king naked?”  The illusion is broken, and everyone must admit that they too don’t see the clothing.  Their king’s weakness and vanity made them all vulnerable to the swindlers’ manipulation and only enriched the swindlers.  Although we often focus on the king’s folly, it would have only taken one brave courtier speaking the truth to prevent the naked parade.  The real story is about how individuals don’t want to be exposed as different or weaker, so they agree to pretend something is true that they know is not.

What exposure anxiety victims never grasp is that admitting errors and correcting them is not a sign of weakness; it is a clear sign of strength.  It demonstrates that the person who erred is honest, responsible, and wise.  That kind of leader, whether parent or president, is worthy of being followed.

We are told in the Book of Mormon that acknowledging weakness is essential to humility, and it implies that humble followers won’t be fooled by false displays of strength or judge the weaknesses of others too harshly.

25 Thou hast also made our words powerful and great, even that we acannot write them; wherefore, when we write we behold our bweakness, and stumble because of the placing of our words; and I fear lest the Gentiles shall cmock at our words.

26 And when I had said this, the Lord spake unto me, saying: aFools bmock, but they shall mourn; and my grace is sufficient for the meek, that they shall take no advantage of your weakness;

Yoda says size doesn’t matter before he upends Luke Skywalker in a swamp using his superior mastery of The Force. We often say “good things come in small packages,” usually when we give a gift that looks small in its wrapping but is in reality very expensive, like jewelry.  Weakness lowers expectations, which lets us surpass expectations or surprise others with our unforeseen abilities, like the stone cut from the mountain that fills the earth.

One evidence often cited of Joseph Smith’s prophetic calling is that he didn’t finish even a high school level education and yet accomplished so much.  Some say that he could not have accomplished so much without divine intervention.  His weakness is cited as proof of his strength (or the strength of his claim).

Why Don’t We Admit Mistakes?

I had a mission companion who said she never wrote anything unflattering in her journal because she figured then her progeny would think less of her and that might undermine her authority.  This is Exposure Anxiety.  In pretending we are perfect, we reveal our insecurity.

Joseph Smith talked about his own mistakes in his history:

I frequently fell into many foolish errors, and displayed the weakness of youth, and the foibles of human nature; which, I am sorry to say, led me into divers temptations, offensive in the sight of God.

Or so it seems.  Then he dials back on how much weakness he is admitting, until he basically boils it down to telling jokes.  He confesses to having a sense of humor.

In making this confession, no one need suppose me guilty of any great or malignant sins. A disposition to commit such was never in my nature. But I was guilty of levity, and sometimes associated with jovial company, etc., not consistent with that character which ought to be maintained by one who was called of God as I had been. But this will not seem very strange to any one who recollects my youth, and is acquainted with my native cheery temperament.

This “confession” reminds me a lot of how people answer the interview question about a weakness the candidate is working to overcome.  Most of them use this question as a way to sneak in another strength, saying something like “I work too hard,” or “I’m just too dedicated to my job.”

If I were to write a confession for Joseph Smith, I think I could come up with a few more things than that.  He seemed to have a lot of ambition, elevating himself to a general, and he also ran for president.  He lived in a mansion built with the donations of his followers (based on his charisma) despite being a poor tenant farmer by trade until he began the church.  He sometimes used guilt to manipulate other people (“If my life is of no value to my friends, it is of no value to me”).  He was not honest with Emma about polygamy.  He destroyed a printing press for publishing criticisms of him, even though the criticisms were factual.  Some of the revelations in Doctrine & Covenants seem to suit his own purposes (admittedly, others take him to task).  He allowed the murderous Danites to exist (frontier times I guess).  He trusted John C. Bennett who was a flattering con man (although not forever).