We often speak of God as a distant abstract entity, a being who dwells on a planet next to Kolob. At the same time we talk of a being who is intimately involved in our lives and helps us find our lost car keys. This dual process of distancing and bringing Him close in many ways makes it easier to dismiss some of the more problematic aspects of God, whilst making the nice parts of Him seem closer to us. But what would happen if we made the abstract distant parts of God just as close to us?

Moral Philosophers talk about the fact that the further an issue or problem is from us the easier it is for us to live with. It is not part of our reality when its far away. We all know that in parts of the world people die in poverty, that AIDS ravages communities, children are abused, and countries are torn apart by war and religious rivalry. Yet, the reality of these evils are not fully cemented in how we think about the world. We know they happen, but we don’t experience them. Personally, I don’t see the brutal reality of famine when I am having a reading lunch with my fellow students at my graduate school. It is difficult to comprehend the world problems that are distant from us.

In many ways God can feel like this. The reality of God can be difficult as we divide him up and talk about him distantly and intimately. As a child I was always reminded of the question: “Would you do that if Jesus was here?”  This was only used to curb childish behavior when dinner was on the verge of turning into a food fight. Looking back, I can’t imagine Jesus caring about a childish food fight, but as a child, it made me think about what would we think about God if he was there. We always think about what God or Jesus would think of us if they were physically with us, but we seldom wonder what would we think of God if he was living around us. If God was not a person in a galaxy far far away, but was in fact our next door neighbour, what would we think of some of the things he did?

What would we think if our next door neighbour came and told us that he had just came home from slaying all the first born children in Egypt?

What would we think if our neighbour came in and told us that tomorrow he was going to watch his only son be sacrificed and not interfere, even though he has the power to?

Or, if our neighbour was going to make a policy which would restrict half of society in what they could do?

Or, if he had decided that he was going to curse people on the basis of their skin colour?

Or, if he was going to make a law that meant that men had to have multiple wives?

Or, he wanted all men to chop off their foreskin?

Or, if he was going to destroy an entire city?

In most of these cases we would be appalled and/or bewildered by the actions of our neighbour. We almost certainly would not consider their actions as praiseworthy or considered ideal. Yet, if we are to take the scriptures literally then that is what God has done in the past, or at least what has been attributed to God in the past. The distancing of God and making him abstract eclipses these issues and hides them from our perception. Its easy to forget about the problem of evil, when that evil is distant. 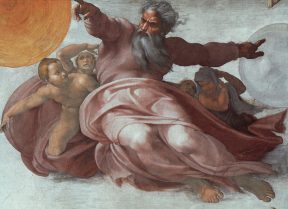 That said, its not a simple case of making God into our neighbour. Our images of God come to us through the words of other men, and there is no guarantee that what they attribute to God is actually from God. We don’t know that God actually ordered the angel of death to kill the Egyptian children, or if he actually said to not give blacks the priesthood, or if he told Nephi to kill Laban, we have it from the word of others that he did. As such, if God was our neighbour we may be very surprised by what he (or even she) might actually be like, as it may contradict all that we have been told about them. We may be surprised to find that half the things that we have been told about what God has done and said is actually wrong.

However, even if God did all of the above we should remember most importantly that God is not actually our neighbour, and we do not know him as intimately as we do some of those closest to us. The better we know more people, the greater our ability to understand them, so if God was our neighbour we may react differently to how we would now.  As for our current knowledge of him, we can’t really know what we would think.  As God reminds us: His ways are not our ways, His thoughts are higher than our thoughts.  Therefore, if God was our next door neighbour, and we saw him acting in close proximity in some of the ways described above, we simply wouldn’t be able to comprehend and understand what he did because we don’t think in the same way as him. We don’t have the ability to see things in the way God does right now, or have the ‘eternal perspective ‘ that God has. Perhaps, this is why God is better at a distance.

So maybe right now I like the fact that God is next door to Kolob and not my next door neighbour.

15 thoughts on “What if God was your next door neighbour?”