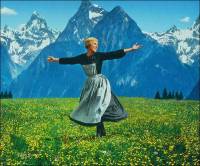 Recently a friend asked me to give them a list of talks that I would recommend that they should read.  There is something exhiliarating about making a list of your top five things. In The Sound of Music, Maria lists her favorite things to cheer up her young charges. Lists also play a key role in one of my favorite films: High Fidelity. Throughout the film Jack Black and John Cusack create lists of their top 5 records as the film follows Cusacks top 5 break ups. Lists are used  as a way of ordering the narrative and to make sense of the complicated web of relationships in Cusack’s past.

Lists are vital for culture to exist and survive. We make lists of books we must read before we die, places we must see, things we must do and films we must see. History books list kings, rulers, and thinkers to impose order on the chaotic fragments that constitute the past. Great works of literature are put into lists of “classics” to encourage their study. Religions list the sacred writings that constitute their canonical works and embody their articles of faith and doctrinal creeds. Lists are found embedded throughout society. They are the infrastructure that underpin encyclopaedias, maps, catalogues and anthologies. Language itself depends upon lists of words (dictionaries) to help us understand the vast expanse of language.

Part of the beauty of lists is that make the infinity of the world managable. A list has both opens up and closes the world. More can always be added to any list. Lists are really just a starting point. On the other hand a list also has the function of restricting and controlling. It can become instrument of exclusion by orthodoxy who proscribe a list of what is acceptable or can be included. Lists focus our energy on what somebody else feels is important.

1. Bringing Humanity to the Gospel by Elder Stephen L. Richards

“I fear dictatorial dogmatism, rigidity of procedure and intolerance even more than I fear cigarettes, cards, and other devices the adversary may use to nullify faith and kill religion. Fanaticism and bigotry have been the deadly enemies of true religion in the long past. They have made it forbidding, shut it up in cold grey walls of monastery and nunnery, out of the sunlight and fragrance of the growing world.”

This talk was so refreshing to read. To read a member of the quorum of the twelve apostles speak out against dogmatism and fanaticism gave me hope that the church was not intended to be so dogmatic. It articulated many of the concerns that I sometimes feel about neo-orthodoxy and those who are overly prescriptive about how faith in God can be expressed and doctrine can be understood. Re-reading it as part of writing this post it reminded me a lot of President Uctdorf. There seem to be a similarity between the two, who both favour a gospel focused in people rather then dogmatism and procedural rigidity.

2. The Gospel and the Church by Elder Poelman

“Sometimes traditions, customs, social practices and personal preferences of individual Church members may, through repeated or common usage be misconstrued as Church procedures or policies. Occasionally, such traditions, customs and practices may even be regarded by some as eternal gospel principles. Under such circumstances those who do not conform to these cultural standards may mistakenly be regarded as unorthodox or even unworthy. In fact, the eternal principles of the gospel and the divinely inspired Church do accommodate a broad spectrum of individual uniqueness and cultural diversity.”

A lot has been said about the censorship of this talk the major changes made in the published version and the cough track added to it after it was given. Whilst I think that this is an important part of understanding the talk (Rock Waterman over at Pure Mormonism has done a great job expounding on this), I still think that its a very good talk even after the changes made to it. The distinction between the church and the gospel is articulated very well in this talk (although not as clearly as it was in the pre-edited version), and it is a call for spiritual independence and a call for less reliance upon the church and more spiritual self-reliance.

“We must develop sufficient independence of judgment and maturity of perspective that we are prepared to handle the shafts and whirlwinds of adversity and contradiction as they come to us. When those times come, we cannot be living on borrowed light. We should not be deceived by the clear-cut labels others may use to describe circumstances that are, in fact, not so clear.”

As a postgraduate philosophy student I wrestled with existential and epistemical questions. It was inevitable that I would apply philosophical methodology to gospel principles. This talk gave me an anchor that stopped me from drifting into an abyss of philosophical doubt. It told me it was ok to question and that if we are honest with ourselves there is much we don’t know. I think members should all read this so that they can understand that its ok not to know something “beyond a shadow of a doubt” (or any other trite over-used metaphor).

4. Work we Must, but the Lunch is Free by Hugh Nibley

I remember reading this as an angst 18 year old fueled with indignation at capitaism after a diet of Naomi Klein’s No Logo and the works of Micheal Moore left me in disgust at the globalised world imposed by America. The combined criticism of capitalist values and the contradiction to the Gospel that Nibley elucidates upon that I found in this talk was a refreshing antidote to the conservatism that I saw rampant within LDS culture. I think it is worth reading because it is very rare to find a liberal interpretation of the gospel (outside of the bloggernacle of course) and even if they end up throwing it on the floor in outrage at it, at least it shows them another perspective on the gospel. (Worth mentioning is Nibley’s talk on Leaders and Managers which was a close runner to this talk)

5. Endure it Well by Elder Neal A. Maxwell

“Endurance is more than pacing up and down within the cell of our circumstance; it is not only acceptance of the things allotted to us, it is to “act for ourselves” by magnifying what is allotted to us.”

I have always been a big fan of Neal Maxwell and this list needed to have one of his talks on it to reflect this. This one was chosen as it really altered the way that I understand the principle of enduring to the end. It made me think more about the process of enduring and how often I impose my time scale upon God. Whilst, it is hardly a hidden diamond, its on the list simply as I think too often enduring has a bad press within Mormonism and is portrayed as a painful thing which one must accept and bear. This talk was a wonderful alternative to the stoic form of endurance that I hear so often at church.

This list has been brief and reflects my own personal bias. Undoubtedly, there are many worthwhile talks that didn’t make my list.  So what talks would be on your list of talks that aren’t read enough by members? What talks have I overlooked? What talks would you recommend to others?  Do you find value in list-making as I do?