We like to claim that we are a church led by revelation.  In light of the last two posts (part 1 and part 2) by Guy Templeton, asking who among the current crop of apostles might give us a revelation, I thought it might be interesting to show a few graphs. 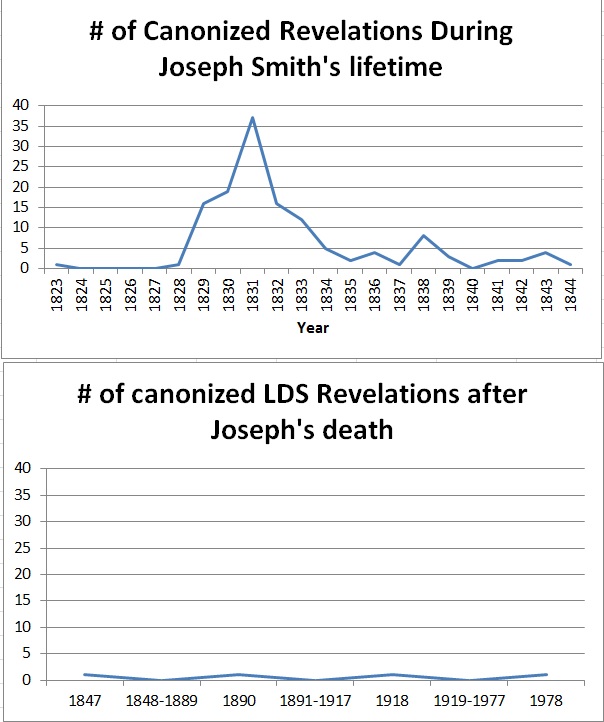 I wanted to include John Taylor because of section 135, (the announcement of Joseph and Hyrum’s death) but he is no longer listed as the author of that section, and has been removed as of 2013.  To my surprise, the Joseph Smith Papers website says

The revised heading in the 2013 edition removes the statement that John Taylor authored this section. Although he has been identified as its author since the early twentieth century, those later attributions were only given as tentative. When the section was first published in the 1844 edition of the Doctrine and Covenants, it did not include an attribution, and no one involved in its publication ever identified the author. Evidence of who wrote the declaration is inconclusive. While it is clear that both Willard Richards and John Taylor, the only two surviving Latter-day Saint eyewitnesses to the murders of Joseph and Hyrum Smith, shared information that is part of this document, others may have contributed to its construction as well.

So section 135 is included as having been written in Joseph’s lifetime, but if you want to move it out of that category, you are welcome to do so.  It’s really going to have nearly zero impact on the graphs. (Note I updated the graph to include John Taylor/Committee for section 135 after the post was originally published.)

I thought it would be interesting to look at the Community of Christ.  Due to the lineal succession, and the fact that they started 30 years after our church, they seem to have taken the lead in revelations.  All 8 presidents of the Community of Christ have issued revelations, though they don’t recognize most of the revelations out of the Nauvoo period, and have removed the sections on Baptism for the Dead.  In spite of this, their graph is quite impressive.

Joseph Smith still has an impressive lead in the revelation count, but even the current prophet Stephen Veazey who has been serving since 2005, has 2 revelations under his tenure, dealing both with how to handle gays, as well as recognizing baptisms from other churches (so long as they weren’t infant baptisms).  Judging from this graph, it seems God is talking to them more often than to us!  (I’d also like to point out that Wallace Smith and Grant McMurray are still alive, both having retired as prophet-president.)

But God seems to be talking to the FLDS too!  You can purchase Warren Jeffs’ revelations for as little as 14 cents (plus $3.99 shipping) on Amazon!  This will bring you up through 2012.  According to this article, Warren even has a prophecy that has been fulfilled!  He prophecied of Moammar Qaddafi’s death!

Section Revelation 81 was written on May 7, 2011, concerning the country of Libya. Verse 1 says, “Thus saith the Lord Jesus Christ, the Great I AM, who dwells in the heavens and rules over all nations of the earth, to the leader of Libya, even Muammar Qaddafi.” Gaddafi, who originally took control of the African nation via a coup in 1969, is told in verses 3 and 4 to “cease your aggression against thine own peoples” and “Repent ye! Repent ye! is the word of the God who made you, for you shall stand before Him in the day of judgement and receive according to the deeds done in the flesh, for thou art a corrupt and murderous and immoral man, and I, the Lord God, declare it to thee.” Verse 9 adds, “I, the Lord, have declared it—that though you remain in power a short time, I, the Lord God, shall cause thee to be removed from power.”

Gaddafi was killed on October 20, 2011, just five months after this was written. Could this be a fulfilled prophecy? Anyone who kept up with the news in May 2011—as Jeffs obviously did in prison—could have predicted Gaddafi’s eventual demise, as this leader was under intense siege for the final year of his reign. For example, a NATO airstrike killed one of Gaddafi’s sons and three grandsons in Tripoli on April 30, 2011. Just two weeks before this attack, Secretary of State Hillary Clinton called for Gaddafi to be captured or killed. Thus, it wasn’t a surprise to most observers when Gaddafi was finally captured in September 2011 and killed a month later.

If you want to see the reveletory process, check out the video on my post from 2011 where Jeffs dictates a revelation to one of his followers.  Before you get so smug to dismiss other church’s revelations, remember that non-LDS often malign the 1978 and 1890 revelations as untrue revelations due to pressure from civil rights groups and the government.  Please comment kindly.

Given Jeffs’ voluminous revelations, as well as the more modest revelations in the Community of Christ, can the LDS Church really claim that God is talking to us in these latter-days?

97 thoughts on “Are we really a church of revelation?”