I received the following message privately from a friend who read my last post entitled “Men, Sex & Modesty” and have permission to share it under my name so the writer remains anonymous. It is long, but it is incredibly important and ought to be read by EVERY person on this earth, and especially by every member of the LDS Church. THIS is why I speak so regularly about how we talk about modesty. My friend’s story needs to be known. If you can do so, please share it with others – in any way that is comfortable for you.  Today’s guest post is by long-time bloggernacler, Ray.

———————————————————
Ray, thank you for tirelessly addressing this topic. It’s so, so important that we stop this senseless female shaming. I have stayed away from publicly speaking about this because it’s a painful one for me. If I could post my comments anonymously on your post, I most certainly would.

We recently had a YW Leader meeting to plan an activity on being a lady. Leaders were saying we needed to teach the girls to bend down properly so that men would not have view of their behinds. –because our men and YM find that to be sexual. Also how they shouldn’t sit “Indian style” even in pants because it could be inviting. Those and other comments were made. I was boiling.

I went home that day and fired off an email to our president, who wasn’t saying those ridiculous things, but I felt she needed to know my point and why. I couldn’t voice it in person or at that meeting because we had no privacy. We’re in a stake building and there was a lot of traffic that day. To make it easier, I copied my email to you. You are welcome to reference any points I have, should you want to, provided, I remain anonymous. 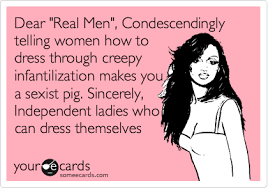 “That meeting, while discussing what to teach the YW for etiquette night, stuck a nerve that many would not understand. They don’t realize what words like that sound like to women like me.

When I was in HS, I was a quiet bookworm who dressed in oversized sweatshirts. I was very, very conscious of my body. This quiet girl in oversized sweatshirts, babysat for a family next door. That father came home from being out late one night and did something unspeakable to a 15 yr old girl. He went into another room, took off all of his clothes, came out and cornered me on the couch. I froze. I was terrified. His wife was watching from the next room and laughed the whole time. It was all so confusing to my innocent self. I was 15. I’d never seen a naked man, much less been pounced on by one. I wasn’t close to my parents and never told them (until 10+ yrs later when he was arrested for child molestation) I was too ashamed to talk about it as a teen and I wondered if it was somehow my fault.

My leaders had taught me that I was largely responsible for keeping men’s thoughts clean. So, I mistakenly thought I must have somehow encouraged him to do that. Then at BYU (still wearing oversized baggy sweatshirts, still ashamed of my body), my roommates and I were at a boys’ off campus house watching a movie. I fell asleep and the others went to another part of the house and left me alone in the living room. One of the male roommates came home (someone I didn’t know well). He found me asleep with no one around. He assaulted me. This time at age 18, I was not as lucky as I was at 15 when all the dad did was follow me around naked until I found the strength to run. That BYU occurrence still creates a panicked response from me when I think of it. 22 yrs later. Again, I never told anyone. I’d fallen asleep; I felt shame and blame. I am ever so thankful he did not steal my virginity. He most certainly did steal my innocence though. I was left in emotional and physical tatters. Even to this day, I fight the voice that whispers to me that I was to blame because I fell asleep. Maybe “I looked too enticing on the floor and he couldn’t help himself”. And falling asleep where I shouldn’t have, meant I couldn’t “defend my virtue” as I was supposed to.

When women (members or not, but more often it’s members) talk about how it’s our (females) responsibility to not bend over, not show shoulders, not show knees etc, because YM/men just “can’t help themselves” from having impure thoughts, it makes a knot in my stomach. My throat tightens. My stomach hurts. My voice quakes. I fight back tears. I was shy. I was ashamed of my female figure and always trying to hide it. Yet, two horrible acts were committed against me and against my will.

I will always dig my heels in when it feels like people are intentionally or unintentionally over-sexualizing our YW. I want them to be taught to dress and act like ladies. To be respectful of their bodies and treat them like the temples and Godly gifts they are. But I want discussions of how our innocent actions are turning men on left out of it. We can’t be responsible for perverse men’s/YM’s thoughts and actions. We can’t inadvertently teach our YW that they are responsible for that.

Did I ever bend over to pick something up and did my creepy neighbor see me? I have no idea. But I cannot easily hear someone say something like that because whether it’s intended or not, it tells me that I could be partially responsible for things that have happened to me. To someone who’s never been molested, assaulted, injured etc., those words and implications would have very different meaning. They probably wouldn’t hear the message that I hear. To me though….

It’s excruciatingly painful. I *know* it is never intended to sound like that. But part of me is still just a teenage girl who had her innocence stolen from her and I carry it with me every day of my life. So sometimes my hackles get raised from sweet and well-meaning people, and sometimes the frightened and angry young girl in me lashes out. It’s a damaging message we should never send. Ever.”

16 thoughts on “Moderation in Teaching Modesty”