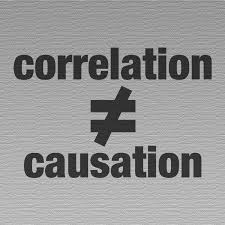 For any two correlated events A and B, the following relationships are possible:

Let me give a few examples related to Mormonism:

Other factors:  Unlike most Americans, Mormons are less likely to self-medicate through alcohol, and far more likely to rely on a doctor’s care.  Genetics can also play a role in depression as can factors like post-partum (and Utah has a high birth rate due to a younger, more married population).

Other factors:  Mormons don’t cohabitate; they marry.  You don’t get divorced if you cohabitate; you just move out.  Also, Utahns marry at a younger age than national average, and younger marriages correlate with higher divorce rates.

Causation confusion–or causefusion for short–is any misunderstanding about the causes of complex events.  Causefusion is a cognition trap that leads us to oversimplify, often at our peril.*

The simple fact (you can see the reductionist thinking already) is that everyone simplifies the world around them, nearly all the time.  If we didn’t, we would be unable to process the complex world around us and function in our daily lives.  We’d spend so much time second guessing and generating alternate scenarios that we wouldn’t be able to do simple things like order food or cross the street.

Of course, in real life, we sometimes simplify wrongly, we overlook or ignore symptoms we should consider, and there are consequences.  We ignore the cook’s hacking cough and get sick.  We ignore the blind spot behind the open car door and have an accident.  We think we are merely tired when we are actually sick.

The correlation between depression and chemical imbalance in the brain.  Which came first?

What if the chemical imbalance in the brain is not the cause but the consequence of our depression?  What if a person first is wounded by some external experience, becomes depressed as a result, and the brain’s chemistry then reflects the depressed state?*

How do we avoid confusing causation with correlation?

Those physicians who escaped causefusion exhibited empathy for their patients.  They spent appropriate amounts of time with them.  They asked probing questions.  They listened to what their patients had to say.  And once they did these things, their imaginations were activated.  They then arrived at possible alternative solutions based on more sensible diagnoses of cause and effect.*

What about self-fulfilling prophecies?  We often say “I’ll believe it when I see it,” but the truth is closer to “I see what I already believe.”  I have sometimes heard this one:

Contradictory information:  The longest life expectancy in the world is in Okinawa (much longer than Utah), one of the highest tea-drinking populations in the world.  They also drink plenty of alcohol.  Other lifestyle factors (being physically active, having a low stress lifestyle) also contribute to their health as do genetic factors.

What about our own role in creating causation?  If you are a police officer and you expect minority races to be criminals, you may in fact cause criminal behavior in those groups (resisting arrest, fleeing the scene, being uncooperative witnesses) by targeting and antagonizing people of the races you mistrust.  Does that mean that they were inherently untrustworthy or that you contributed to the cause?  So here’s a Mormon version of that:

In this case, there is a third cause:  whatever caused them to disbelieve in the church’s authority is the same thing that caused them to reevaluate their future moral choices.

This is an example of a self-sustaining system:  A causes B, and B causes A.

*Causefusion is discussed in depth in Blunder:  When Smart People Make Bad Decisions.  Quotations are from that book.