Anyone who has listened to the Mormon Stories podcasts, or spent any time around New Order Mormons, or any Ex-mormon site should be familiar (they are used often enough) with the terms cognitive dissonance, deception and delusions. It seems as if they have a particular traction amongst these groups. Personally I think they are over used, and more importantly that they are misused for rhetorical effect.

Simply put cognitive dissonance is the mental friction that comes from holding conflicting or contradictory ideas. For instance, a person who smokes knows that smoking increases the risk of lung cancer, is bad for their heart, and will shorten their life; at the same time they may believe that they are a rational person capable of making smart choices. Clearly, however, the smart choice is not to smoke.  The friction of holding both beliefs at once (“I’m smart” but “I smoke”) is cognitive dissonance. George Orwell described cognitive dissonence as doublethink which means “the power of holding two contradictory beliefs in one’s mind simultaneously and accepting both of them.”

Cognitive dissonance gains traction amongst the Mormon Stories devotees as a useful phrase to describe the contradictions that result in disaffection. The narrative goes as follows:  I believed X; I then found out Y.  I tried to balance the two or put it on the shelf, but then one day the shelf collapsed from the weight of contradictions. Or I got tired of all the mental gymnastics required to make sense of it all.  The general idea is that the contradiction in certain ideas such as Joseph Smith being the greatest man alive after Jesus and the fact that he had multiple extra wives leads to cognitive dissonance. 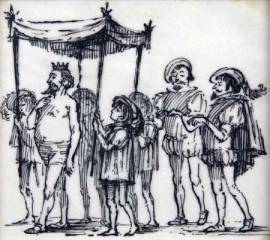 Leaving the church is seen as an escape from cognitive dissonance. The narratives of the Wizard of Oz and the Emperors new clothes are often used as a metaphor for this experience.  The person realises that the emporer is really naked and that for years they have been pretending to see something that wasn’t there. Yet, is life outside of the church any less contradictory than life inside the church?  This is not to say that the dissonance and contradictions they experienced within the church are not important. In other words they may have exposed the emperor to be naked, but have they ever looked at themselves to see that perhaps they are just as naked as the emperor?

The eighteenth century writer Johnathan Swift said that “if man would register all his opinions upon love, politics, religion and learning, what a bundle of inconsistencies and contradictions would appear at last.”  The fact is that everyone is inconsistent.  Just as the church does not have a monopoly on good people, truth or boring meetings, it does not have a monopoly on cognitive dissonance and inconsistency.  Everyone is inconsistent to a degree, some more than others. The problem is that the rhetoric of cognitive dissonance implies that a person has achieved a state of less cognitive dissonance when perhaps it is simply that they are less aware of it. They were aware of contradictions before, and in reaching for security they have hidden the contradictions from their awareness. 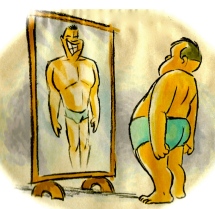 The simple fact is that we all are under cognitive dissonance, because we are all lying to ourselves. An article in the New Scientist last year looked at the many ways in which we deceive ourselves and why. Neuroscience in the past 20 years has revealed that our perceptions are not as good as we think they are. In courts eyewitness testimonies are particularly untrustworthy, as this Pulitzer prize winning article points out about the problems with line ups and eye witnesses, we see what we expect to see, and what we see can changes according to context and focus.  The problem with our perceptions is that they depend upon our neuroanatomy and our experience.  As no one has the same neuroanatomy or experience, nobody experiences and perceives the world in the same way. This is of course rather obvious, but the problem is our interpretation of what we see. Because we do not see reality directly, but rather through a glass darkly, our impressions are simply guesses and interpretations that our minds create. Thankfully, our minds our phenomenally good at making accurate guesses and approximations, but approximations they are nonetheless.

We use these guesses and approximations that we gain every day to create our world view and the ideas about reality that we have. The problem is that if everything that we perceive is an approximation, then it is very easy for new information to invalidate our ideas. If we approximate that the majority of English people sound like the Queen, then it would only be a matter of minutes before we would have that idea invalidated when we travelled to England. For trivial beliefs this is fairly innocuous, but many of our ideas are deeply tied to our sense of self and letting go of them is much more serious. When something comes along that contradicts our ideas it not only threatens that individual idea, but it threatens all of our ideas. Our ideas are all woven together into a system and to doubt one can bring the entire system into doubt.  Because our world view is tied to our sense of self, this threatens who we are.

The risk of the annihilation of our ideas and our world view often means that we lie to ourselves about it. We minimise, ignore, pretend, in order to maintain the world view that we hold. We do this in order to maintain a security personal identity. Deconstructing our ideas about the world can destabilize us and leave us feeling confused. In order to preserve our sense of self we lie to ourselves. Perhaps, we do not have the strength to confront the truth or our mind has a need to maintain order. The truth can be painful, upsetting, chaotic and messy.  Mental peace involves minimising the risk of disruptive truths.  As the writer of the article points out:

No matter how much evidence we accumulate, our truths will always be approximations and absolute certainty will exist only in our fantasies. Lying gives us the temporary delusion that our personal and social worlds are intact, that we are loved, that we are safe, and above all, that we are not likely to overwhelmed by the uncertainty inherent in living in a world we can never truly know.

The end of the Yellow brick road

The idea that we all inhabit a world that is only meaningful to ourselves can be terrifying. It means that we are responsible for the way in which we interpret the world.  For instance, when facing a disaster, one person might interpret it as a challenge to be mastered, another as a certain defeat, while a third might see it as the punishment he or she deserves (or worse, doesn’t deserve). Crucially, the decisions about what to do follow from the interpretation each person has made.  If we acknowledge this, we see that the responsibility for our actions is entirely in our own hands. We deny this truth because while we are not responsible for most of what happens to us, we are always responsible for how we interpret it and therefore act.  And we dislike taking responsibility for ourselves as much as we dislike uncertainty.  As the New Scientist writer said:

We can never escape uncertainty: it is part of our very being. Scientists struggle daily to accept uncertainty, and still search for “evidence”. In our personal, professional and collective social lives it looks as if we may have no choice but to confront uncertainty if we are to survive – and survive well.

This is most likely what the poet John Keats was thinking of when he coined the phrase Negative Capability which he described in a letter to his friend as the following:

I had not a dispute but a disquisition with Dilke, on various subjects; several things dovetailed in my mind, & at once it struck me, what quality went to form a Man of Achievement especially in literature & which Shakespeare possessed so enormously – I mean Negative Capability, that is when man is capable of being in uncertainties, Mysteries, doubts without any irritable reaching after fact & reason.

The disruption of our ideas can be both a blessing and a curse. When Dorothy discovers that the Wizard does not have all the answers to her problems she becomes a stronger person. On the other hand, when Othello believes his wife Desdemona is unfaithful, he acts on his belief and kills her.  When he discovers his belief was wrong, he is driven to suicide; his cognitive dissonance literally destroyed Othello’s self.  Bringing it back to the original point, many within and without the church claim to be certain that the church is either true or not true. The fact that someone can be so certain about it not being true leads me to wonder if they have simply substituted one form of fantasy for another, one mistaken certainty for another equally mistaken certainty. The discovery of contradictions and paradoxes within the church can be a means to strengthen us as individuals or it can be destructive. In either case care must be made that we do not substitute one delusion for another.

This leaves me to wonder: