On March 30, 2010 then President Obama signed a law authorizing the US Department of Education to take over the nation’s student loan issuance. Prior to the law, the federal government issued approximately a third of student loans through its direct-lending program, but as of July 1, 2010 (when the law became effective), banks, schools, and other lenders no longer would issue student loans. The idea was that the government would freeze out predatory lenders, income-driven repayment options would reduce the burden of loan repayment for graduates, and revenue would help fund the Affordable Care Act. While some of that may or may not have come to pass, we have definitely seen the politicization of student loans; and subsidized loans have helped to hide the rising cost of tuition, which, according to the National Center for Education Statistics, has risen from an annual tuition of $8,238 in 1985 to $18,632 by 2015 (dollars are for public four-year institutions and are in constant 2015 dollars), for a compounded increase of 2.87% per year.

Below is a comparison of student loan debt to auto loan and credit card debt, published by the Federal Reserve Bank of New York. I’m not sure how anyone could see the trend for student loans and not get really concerned. It simply is not sustainable, especially when you consider that, according to The Institute for College Access & Success, 68% of 2015 bachelor’s degree recipients graduated with student loan debt, with the average debt per borrower at $30,100. That is a lot of debt when one considers the lackluster income potential for many majors, that graduate school is necessary for many careers, and that student debt cannot be discharged through bankruptcy.

When I look at that rate of growth in student loan debt, I worry that we are creating serfs of our college graduates, especially since I do not see anything on the horizon that will arrest this trend. It’s scary. 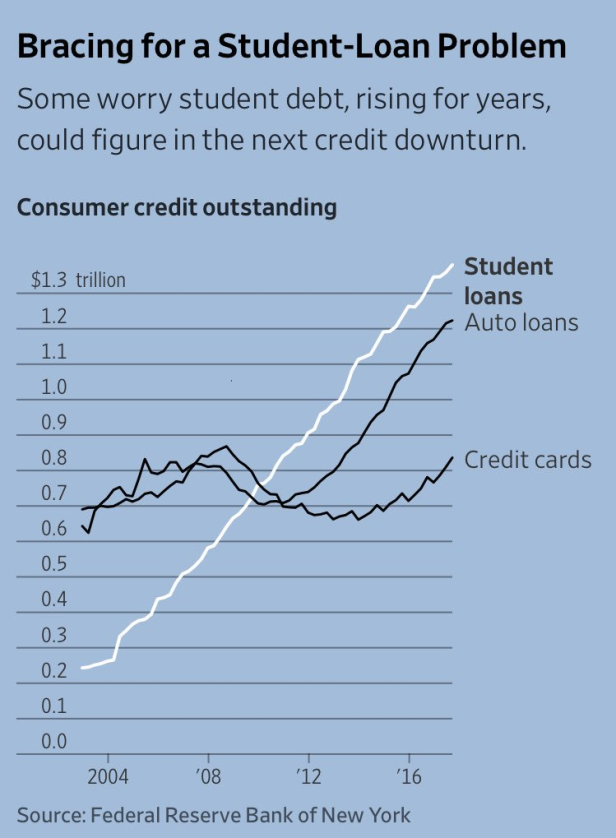