Does your ward have cliques?

Just this weekend, a friend I grew up with announced on FB that he will never go back to his current ward because of how his wife was treated during a recent fundraiser. Another friend chimed in that this was the very reason she had ceased to go to church. I also found that a commenter had piped in on a post I did on cliques in 2010 back on Mormon Matters which prompted me to revisit this 7 year old post. She shared a very bad experience she had in her southeastern US ward:

The person new to a ward or having trouble fitting in is not the person that should be the only one responsible for trying harder. Suppose that person is clinging to the very last piece of strength and faith when they enter the ward, only to be rebuffed by their sisters? I am. I’m a widow without family (here) to attend church with me. I’ve sat down in Relief Society next to someone I know and received a “look” so I moved so their clique member could sit in “their” seat. Cliques hurt, exclude and don’t belong in church. I was asked to provide center pieces for a RS dinner. I was so happy to be asked! I communicated regularly with the RS activities sister, letting her know that all was planned and prepared. Two days before the event, she called and told me that one of her clique-sisters had picked up some plants for the tables. Did I mind if they used them? I told her that I did, that my centerpieces were classic and beautiful. I’d spent a lot of time and effort designing them, not to mention all the time shopping for supplies after work. She said the decision was made and hoped I hadn’t been “put out” by this unplanned change. I told her that I was “put out” and had already made beautiful centerpieces – glass cup planters with ribbons contained violets, with glass saucers, set on decorative paper mats and surrounded by decorative accents pieces and candies. I prayed hard about this deliberate exclusion and went to the dinner, head held high. It’s the last ward RS function I’ve attended. The cliques are still there today and they still exclude many, except for a “project” newcomer every once in a while. I am not the problem. I don’t need to try harder, make myself available, choose not to be offended or anything else.

Another commenter pointed out the problem when wards label the person who left as having been offended, a way to blame them for their reaction to the treatment doled out rather than focusing on how we can be more inclusive and welcoming.

And let’s not forget how the word “offended” gets thrown around. If you are accused of having been “offended” by someone or something in the Church, you are immediately classified as the one in the wrong. By saying someone is offended in our Church, you are (IMO) labeling them as weak, not valiant, not strong in the faith. The comment goes directly to your character and your testimony. While I agree that finding offense is or can be corruptive to your state of mind, do you think those who do the offending get off scott free? Is it OK then to be mean and nasty and exclusionary? No, I think not.

Cliques tend to form within the boundaries of a larger group among individuals most likely to interact based on common interests.  While cliques can occur within any group, the term is pejorative. And yet, to some, “inclusion” is considered pejorative. One Christian site decried the “gospel of inclusion” as a heresy designed to soften the gospel to allow sinners into the ranks of church members. Last I checked, we were all sinners. Well, except Dana Carvey’s Church Lady.

In my post 7 years ago, I shared the theory behind a psychometric test called the FIRO-B that attempts to gauge one’s interest in being included.  It covers the following personal characteristics:

The FIRO-B instrument measures two other aspects as well: 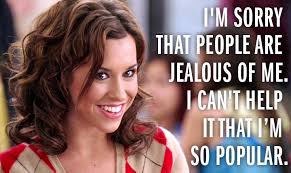 Personally, I’m pretty low on the inclusion, control and affection scales, and I’d rather initiate contact (or be ignored). I recognize, though, that I’m an outlier. Most people want to be involved. And even I, at some point, am capable of feeling snubbed and marginalized.

So, cliques happen.  That much is a natural byproduct of social groups.  But we want to make church a welcoming place for all, even though it’s not something we seem to be doing very well on the whole. What cliquish behavior occurs in church?

The church also has some clique-busters built in:

22 thoughts on “Gospel of Inclusion vs. Ward Cliques”