MaryAnn gave some excellent analysis in wondering if LDS population was a good predictor of Trump support in Utah.  It turns out that she was right–LDS population by county was statistically insignificant in the analysis.  The best predictors of a Trump supporter were % Registered Republicans, and % Rural. 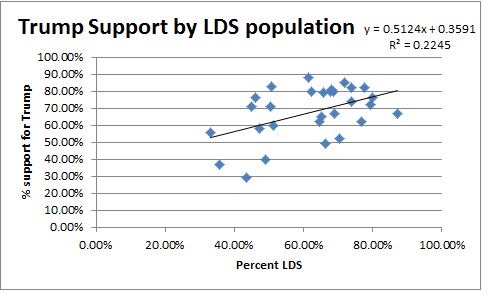 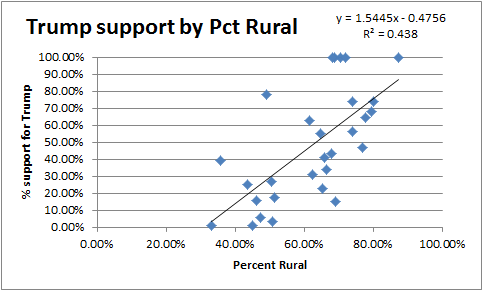 Visually, you can best see this with a scatterplots shown to the right.  Notice that the Rural and Republican plots are far steeper, while the Republican plot shows the dots are much tighter than either Rural or LDS plots.  There appears to be a lot more variation in both the LDS and Rural plots as evidenced by the further distance of the dots from each other.

If we were to draw a line that best fits the data, this is called a regression line.  How good is the line?  That’s given by the r-squared value.  Just take the correlation coefficient (r) and raise it to the 2nd power to see how good your model is.  As you can see from the 3 graphs, the r^2 for LDS is 0.22, for Rural it is 0.438 republican it is 0.475.  This basically says that if the only thing you consider is LDS population by county, 22% of the variation is explained by LDS population (and 78% is other factors).  You can make similar deductions from the other 2 graphs.  The closer your r^2 value is to 100%, the better your model is.  So we can see that Rural and Republican models explain Trump support better than LDS population does.

*Note-Model 1 includes % LDS (statistically not significant) in the model, while Model 2 only includes % Rural and % Republican.

So the first time we ran the analysis, it showed that LDS population was the least significant variable (.605), so it was removed from model 1.  Then the regression was run with just % Rural and % Republican.  You can see that both variables in model 2 are HIGHLY significant (.009 and .003.)  These 2 variables are much better predictors of whether a person would vote for Trump.  Basically, if you were to run an equation to predict Trump support in Utah counties, it would look like this:

Now, how good of a model is the equation above?  It’s got an r^2 value better than any of the Excel graphs above (0.599) which means that 40% of Trump’s support in Utah is explained by factors other than our model of just 3 variables.

Now, I suppose it could be argued that LDS=Rural and LDS=Republican (at least that’s what it seems like at church.)  So I ran a few correlation coefficients to see if these were correlated.  To my surprise, there was extremely weak correlation between % LDS and % Rural (0.21) but there was a very strong correlation of LDS and registered republicans (0.72).  That can’t be denied, and it probably explains that it is the registered republicans who are making all the political statements at church.  They’re the proud and loud Republicans at church.

Still, I don’t know the overall percentage of LDS Registered Republicans in Utah, but if we take the mean of all counties (probably not a super accurate number), it seems the “average” registered LDS republicans by county is 54.72%, meaning 45.28% are either unaffiliated or registered democrats.  This seems to show why % LDS wasn’t a very good predictor of Trump support.

MaryAnn was nice enough to give me an expanded data set for McMullin and Clinton support.  That gave some interesting results as well.  Using the same methods as described above, I did a regression analysis of McMullin support in Utah.  As shown in this table, both % LDS and % Rural were significant factors to predict McMullin support.  % LDS population was highly significant (.000).  The Betas give a measure of the strength of support.  McMullin had positive support from the LDS population (.595), but have negative support from Rural (-.720).  So it seems that Rural counties voted overwhelmingly for Trump, and against McMullin.  The equation would be this:

In other words, McMullin’s LDS support was overwhelmed by Rural voters who seemed to choose Trump over McMullin.  (Whether someone was a Registered Republican was not statistically significant (pvalue 0.693).  (The r^2 value for McMullin’s model is 0.668.)  I also ran the model to see how unaffiliated voters went for McMullin and it was not statistically significant (pvalue 0.875)

Now let’s do that for Clinton.

*Another way to think of this is that non-LDS probably voted more for Clinton.

*The r^2 for this model is 0.712, meaning of the 3 models, this was the best predictor–in this case of negative support for Hillary Clinton.

*Unaffiliated votes didn’t vote in significant numbers for Clinton either (pvalue 0.684–not shown)

So where did Clinton get her support you may ask?  Democrats overwhelmingly voted for her.  Noteworthy also is the fact that % LDS and % Rural were also significant, just in opposite directions.  If we start with a baseline of 36% of support, then we can add democrat support (beta 0.456) and subtract off % LDS population (beta -0.441) and % rural (beta -.222).

If you want to see the data set I used (combination of Mary Ann and mine), see election-analysis-utah-counties

Finally, I came across a recording from a BYU-Idaho professor who analyzed election results and noted that while the guys at fivethirtyeight.com did get the polls wrong, the results were within the margin of error.  Problem was the Electoral College magnified the mistakes, tipping the election to Trump.  He specifically highlights the states of Michigan, Utah, and Idaho where there were some interesting results.  If you’d like to listen, turn on your speakers:  https://byui.adobeconnect.com/_a727341645/p6vtkl65hek/?launcher=false&fcsContent=true&pbMode=normal  (It’s a different discussion than what Mary Ann and I did, but still interesting if you’re a statistics nerd like me.)  The professor notes that it looks like a lot of McMullin voters changed their mind and voted for Trump in the booth.

I know that was a technical discussion but it does seem to imply that McMullin voters were significantly LDS, while Trump voters didn’t get statistically significant LDS Support, and Clinton had negative support from high LDS population counties. Are you surprised by any of these results?

10 thoughts on “Why did Trump do so well in Utah?”