Utah’s support of Donald Trump in the recent U.S. Presidential election has caused some personal introspection. Trump winning Utah wasn’t unexpected, but the sheer number of votes he garnered was surprising given the rocky public relationship between him and Mormons (Utah is about 63% Mormon). People have attributed Trump’s support to a number of factors: rural voters hoping to stick it to urban “elites,” rising trends of nationalism and anti-globalism, entrenched racism, misogyny, bigotry, and more. Some have specifically blamed Mormon patriarchal culture for pushing Utah women to reject a female candidate.

Mormon moral outrage at Trump’s pursuit of the presidency was unusual, to say the least. Early in the campaign, church leadership issued a rare public response to his suggestion of barring Muslims from entering the United States. When Trump became the Republican front-runner, a well-respected Mormon politician and 2012 U.S. presidential Republican nominee gave a very public speech denouncing him as “a fraud.”[1] At the beginning of October the editorial board of the church-owned Deseret News published an op-ed calling for Donald Trump to step down, arguing “The belief that the party and the platform matter more than the character of the candidate ignores the wisdom of the ages that, ‘when the wicked beareth rule, the people mourn.'” A Mormon third-party candidate even looked poised to take Utah’s electoral votes away from Trump a couple weeks before election day.

Trump’s unexpected level of support in my home state has continued to bother me, so I decided to look at the numbers to determine any influential factors. I compared Trump support in each county to the most likely measurable factors I could think: percent Mormon population, percent rural population, and percent registered Republicans.

As I said before, Utah is about 63% Mormon. A 2014 Salt Lake Tribune article lists estimated percent Mormon population per county. The graph shows these figures (red line) with Trump support (blue line) among individual counties per Utah’s official election results website.[2] The counties are arranged by Mormon population from lowest to highest for visual ease. While there is a general uptick in Trump support (blue line) going towards more Mormon-dominated communities, it doesn’t look like the two are tightly connected.

The U.S. Census Bureau website has data for urban versus rural populations per county from the 2010 federal census. The graph shows percent rural population in Utah counties (red line), again arranged from lowest to highest, and corresponding Trump support (blue line). While there is a slightly steeper general trend in Trump support from urban to rural areas, the pattern is inconsistent among individual counties. 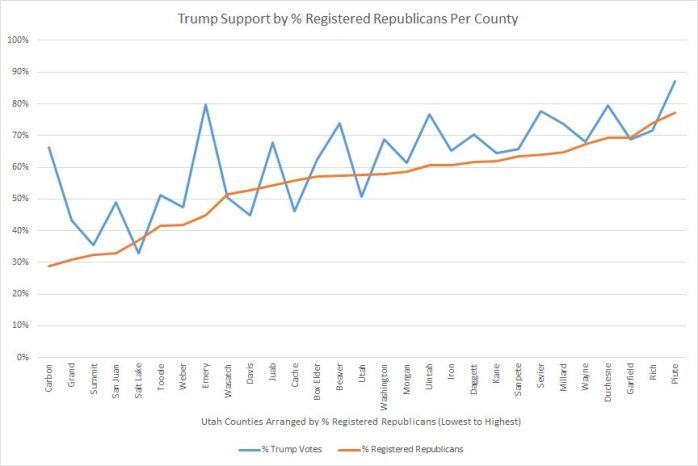 The Utah government website has numbers available on registered voters and party affiliations per county. The graph shows percent registered Republicans per county (red line) from lowest to highest and corresponding Trump support (blue line). I wasn’t expecting much with this data since it has two major problems:

Obviously not all registered Republicans voted for Trump (hello, Exhibit A), but his support seems to roughly correlate with political affiliation as opposed to religious or urban/rural characteristics. The Utah Colleges Exit Poll had 49% of Utah Trump voters saying their decision was based on a #NeverHillary position rather than any particular affinity for Trump. As someone who grew up in a household listening to Rush Limbaugh during the Clinton administration, I can testify that despising Hillary Clinton for any number of reasons is a long-standing tradition in the Republican party. But it’s hard to say if a person’s #NeverHillary position means just intense dislike or major disagreement with the direction her administration was likely to take (her pro-choice position was a deal-breaker for a lot of pro-lifers). Military people I know took very personally Hillary’s mishandling of classified information as well as everything Benghazi (just take a look at the predominantly Republican military’s reaction to Trump’s victory).

I also wonder how much party loyalty played a role. Mike Pence (Trump’s VP pick) came to Utah about two weeks before the election and urged Utah Republicans to “come home” and vote for Trump. A week after Pence’s visit, Trump’s position in Utah became much stronger.[4] Helping your party get in control of both the executive branch and, very likely, the judicial branch is not insignificant. However, if this means Utah Republicans subscribe to the notion denounced by the Deseret News that “party and the platform matter more than the character of the candidate,” that is also not insignificant. As Hawkgrrrl says, loyalty is a tricky virtue.

If many Utah Republicans voted along party lines, it may explain a lot of the apathy among Trump voters over the election results. For them it makes sense to say, “My party won, your party lost. That’s how elections work. Get over it.” The anti-Trump protests just look petulant.

I’m still trying to process the results of the election and understand the mindset of many of my friends and family members. Understanding someone’s intent does not mean I agree with their decisions or the impact of their actions, but it’s still valuable in facilitating communication and moving forward.

I wrote this post a couple days ago, but something happened yesterday. I was driving my mom home (remember I said I listened to a lot of Rush Limbaugh when I was growing up?), and she saw a bumper sticker on the car in front of us.

Mom: “‘Love Trumps Hate.’ I don’t get it. Is that supposed to mean something?”

Me: (Surprised and scrambling) “It’s like with all the anti-Trump protests right now. Even though he’s the president, people are saying that the racism and misogyny stuff he said isn’t okay. Remember we talked about the uptick in hate crimes?”

Mom: “Hate crimes against who?!” (In our previous conversation, all she’d heard about from her news sources was Trump supporters getting persecuted.)

Me: (Sigh) “Hate crimes against minorities. Like people throwing out racial slurs, women getting groped by strangers, Muslims getting persecuted, stuff like that.” (Aside, when I talked about the women getting groped last time, she suggested that girls needed to be more assertive and say, “Stop it!”)

Me: “You must not be reading very many firsthand accounts.”

Mom: (Indignant) “I’ve been reading a lot of stuff!”

Me: “Fine.” (Backpedaling a bit) “You know, it’s kind of hard to say how much of an uptick there’s been, since the U.S. doesn’t really track hate crimes very well. It’s possible it’s the same amount, but people seem to be using Trump’s name with it a lot. Like painting swastikas with stuff like ‘Go Trump!’, or telling Hispanics they are going to be kicked out now that Trump’s elected. People are saying and doing all sorts of mean stuff, and saying it’s okay because Trump was elected so we don’t have to be politically correct anymore.”

Mom: (Pause) “Well, if that really is happening, that’s horrible.”

[1] Of course, that politician is now being considered for Secretary of State in a Trump administration, so…

[2] Percent Trump support calculated from number of Trump votes divided by total presidential votes from that county (write-in votes are not reported on the website). County election results as of most recent report (November 18th).

[3] Carbon County and Emery County are obvious outliers for their support of Trump in relation to percent registered Republicans. This might be explained by economic factors. Over 20% of jobs in those two counties derive from coal mining and associated support industries, and Trump made a lot of campaign promises to coal miners, specifically.

[4] The FBI investigation into Hillary’s emails was in the news at the time, but Hillary’s support stayed pretty stable in Utah (31% in the earlier poll down to 28% in the later poll). Trump was pulling major support away from third-party Mormon Evan McMullin’s camp. Trump supporters were really pushing the idea that support for McMullin was equivalent to support for Clinton, so maybe the emails did play a role in Trump’s rise.

Photo from The Salt Lake Tribune.