Brother Mike Stroud is a relative newcomer to the Mormon podcasting scene, yet he has gained a significant following, especially among the LDS prepper community. Over at the One Who is Watching blog, Brother Stroud was recently cited as the “doctrinal patriarch” of an emerging remnant movement within the LDS Church, separate from the Remnant movement associated with Denver Snuffer. Rather than remnant, Brother Stroud tends to reference the elect of the latter-days (those who’ve been “awakened”) as the 144,000 or gatherers.

I became acquainted with Brother Stroud’s ideology earlier this summer when his podcasts were recommended to my ward’s Gospel Doctrine class. He seems like a nice, sincere guy. The way he talks reminds me of one of my favorite Sunday School teachers, a blue-collar no-nonsense authoritative figure.

Brother Stroud is Denver Snuffer and Robert Norman all rolled up into one. And he doesn’t seem to grasp the consequences.

Do you know how many times I’ve heard, “Do the brethren know what you’re doing here? Have you gotten any pushback from the church? Does your stake president know what you’re doing? How about your bishop?” And to all of those questions I say, “I have no idea. I don’t know.” (Podcast 056: Layton Utah Conference, about 21:45)

Another question that I get all the time, “Brother Stroud, are you one of those apostates?” “Why? Because I teach the doctrine of Christ from the Book of Mormon?” (Podcast 056: Layton Utah Conference, about 50:57) 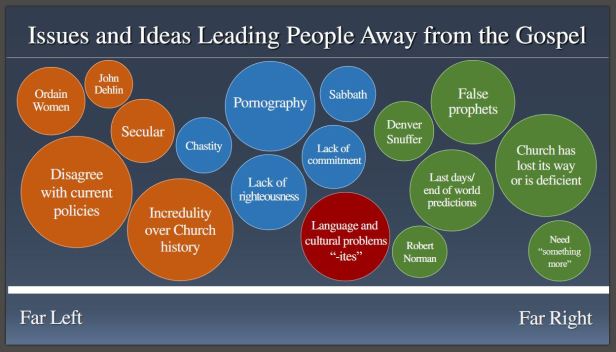 I’ve previously written about both Denver Snuffer and Robert Norman. Both were cited on the “Enemies List” slide, part of a leaked PowerPoint presentation created for the Quorum of the Twelve Apostles in December 2015. This slide, titled “Issues and Ideas Leading People Away from the Gospel,” has issues of concern depicted on a spectrum of colored bubbles. Both Denver Snuffer and Robert Norman have small green bubbles on the right side of the slide, indicating more conservative/fundamentalist ideological deviations from orthodoxy.

Brother Stroud has all the institutional credibility of Robert Norman. According to a brief biography he shared with a prepper forum, Stroud worked in the Church Educational System for 27 years as a seminary teacher. He retired in 2006 and thereafter served three missions (Mongolia, Philippines, and New Jersey). One inspirational experience from his CES mission in Mongolia is in the By Study and By Faith CES manual. In that account, a local CES employee credited Stroud’s tutoring in Book of Mormon study as an incredible spiritual experience, motivating him to continue with his employment.

For decades a super-prepper, Brother Stroud was mentioned in a 2002 Church News article as the Stake Preparedness Director when almost two-thirds of his stake secured a year’s supply of food.

“Since Dec. 28th, 10 semi trucks have come to Eagar and distributed wheat, beans, olive oil, and salt to members and non-members alike,” said Mike Stroud,… “There are now close to half a million pounds of wheat alone in our community that wasn’t there last December.”

But since Brother Stroud’s retirement, his religious views have been transformed by the teachings of Denver Snuffer. A decade ago, Brother Stroud read Snuffer’s first book, The Second Comforter: Conversing with the Lord Through the Veil. It was a life-changing event.

And that began my quest for all of these things. That doctrine opened up other doctrines, things that lead up to– there are certain things that have to take place prior to you obtaining this great blessing, and I learned about those. And one door after it opened and it seemed like as soon as that door was open that the Lord sent information to Margie and I that we’d never received before. It just seemed to flow to us. And one thing came after another thing, and after another thing, and we started to experience things. We started to have great experiences, spiritual experiences, great pearls that came our way, and it all started because some guy that lives in Sandy, Utah, wrote a book and in it testified that he had seen Christ… (Podcast 014: Unbelief Revisited/Priesthood Introduction, about 49:36)

Like Snuffer, Brother Stroud believes that the Book of Mormon is the “handbook” to receive the Second Comforter, a personal visitation from Jesus Christ [Podcast 056]. The church is under condemnation, because we’ve “all but removed this doctrine from our doctrinal discourse in the church”[Podcast 047]. Luckily, people are are being inspired to learn about these mysteries, those who’ve obviously been foreordained to receive this blessing [Podcast 022].

Like many of those who follow Denver Snuffer’s teachings, Brother Stroud is also a fan of author John Pontius. One particular favorite, Visions of Glory, is an account of a detailed end-of-days vision received by a man called Spencer. It caused some sensation among the LDS community a few years back. Stroud relies heavily on “Spencer’s book” when discussing imminent future events, especially interactions of those in the 144,000 with translated beings from the City of Enoch.

It is not unusual for those who listen to his podcasts to also follow other endtimes visionaries like Julie Rowe and Shelle McDermott. Sister McDermott has appeared in firesides with Brother Stroud, and wrote forewards to his books (transcriptions of his podcasts).

Brother Stroud also encourages listeners to take seriously theories regarding the Revelation 12 prophecy being fulfilled next week on September 23, as well as other recent celestial manifestations. John Pratt gave a presentation of these signs of the times at the recent Remnant general conference in Boise.

Differences between Snuffer and Stroud

Brother Stroud’s views are determined heavily by personal revelation and speculation. He is not, however, afraid to modify his views based on the experiences of others. He doesn’t claim to have received the Second Comforter, so he depends heavily on accounts told to him by other latter-day saints. He’s like a sponge. When one listener expressed concern about Brother Stroud’s reliance on Denver Snuffer’s teachings, he explained,

I have read all of Denver’s material. I have learned much from what he has said. Denver has set his course on a path that he is pursuing. Time will tell where it leads. I gather information from whatever source I can, and then seek to discern through the Holy Spirit if it is truth or error. (Comment on Podcast 014: Unbelief Revisited/Priesthood Introduction)

Unlike Snuffer, Brother Stroud does not believe the current church is in a state of apostasy. He encourages members to remain in the church with the understanding that the institution is a preparatory organization.

Brother Stroud heavily emphasizes using priesthood power to cast out devils and unclean spirits, something I’ve not seen as much in Snuffer’s teachings. He believes both mental illness and LGBT identity “are caused primarily by devils and unclean spirits” (Podcasts 055 and 056). He also believes many others are afflicted by these supernatural forces, and pleads with those holding the priesthood to cast out those entities.

Brethren, we need you to become informed, and rise up in the power of your priesthood. One of the first things that you’ll do as you start to exercise that magnificent power will be to liberate those who are afflicted with unclean spirits and devils. Gotta do it…. Your wives and your children are suffering, many of them. You’d be surprised how many phone calls and text messages that I get from sisters who recognize this affliction within the family and are just desperate to see it stopped, and don’t know what to do. So we get on the phone and we talk to husbands, and we try to give scripture passages. I’m no guru on this. I don’t profess to be anything but I know what the brethren taught in the early days, and we need to just do what they were doing! (Podcast 056: Layton Utah Conference, about 45:38)

I like studying and blogging about these different movements in Mormonism, but this one hit too close to home. I was grateful to finally see a conversation online about those influenced by Mike Stroud’s podcasts. As one who has mental illness, I’m really uncomfortable with relying on casting out evil forces rather than seeking medical help for these conditions. And explaining LGBT issues via demonic possession is a nightmare (I can’t see the Brethren backing this, no matter how anti-gay marriage they are).

53 thoughts on “What Do You Get When You Combine Denver Snuffer and Robert Norman? Mike Stroud.”