According to the Proclamation on the Family, gender is an eternal characteristic.  The proclamation goes on to describe certain traits within marriage as male and others as female.  The problem is twofold:  diction and science.  On the diction side, words used to describe gender are often unclear, imprecise, outdated or simply not the right word.  Saying gender is eternal could be nonsensical depending on what you actually mean by gender.  Secondly, science shows that gender is not a binary.

A recent Time article discusses the problematic nature of so-called Bathroom Legislation which requires children to prove their sex before allowing them access to the school bathroom.  The case is cited of a 17-year old girl whose pediatrician was trying to determine why she hadn’t advanced through puberty yet.  A blood test showed that she had 46 XY chromosomes; despite having female genitalia, she had male chromosomes.  About 10,000 babies are born the the US every year that have an intersex trait, complicating gender identification and often resulting in singling out and persecuting a misunderstood minority.  These types of bills typically give cis kids a pass and only require transgender or intersex kids to “prove” their sex.  They assume that sex is binary and that it’s just a matter of finding out what it is.  The problem is that there are no bright lines, either in genitalia (as seen in this example) or in brains.  From the article: 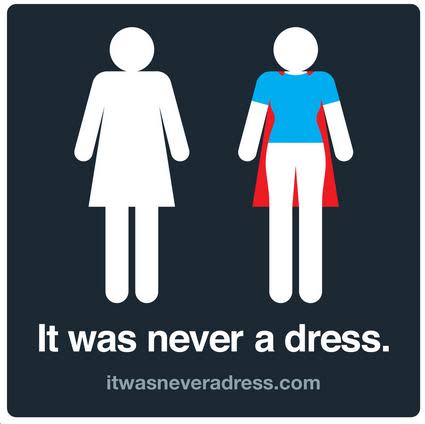 Trying to force people into an all-male or all-female bucket isn’t as simple as we think.  The other factor is that our gender identity is partly formed by how people perceive us.  If you’re Pamela Anderson or Burt Reynolds, you are probably used to people treating you like the gender you express, but if you are comedian Julia Sweeney’s “Pat” character, your androgynous or ambiguous characteristics result in a different kind of treatment and assessment.

So is our gender identity (whatever it may be) the thing that is eternal and essential or does the proclamation reveal a bias toward binary gender assignment that is contradicted by emerging science?  Given the focus on binary gender roles, the proclamation seems to be stating that one is either eternally male or female, all in, which is not what science shows.

I’ve often observed that the problem with the proclamation’s gender roles is that they are either descriptive or prescriptive.  If they are descriptive, what’s the point?  If so, that’s the way people behave naturally, so who cares?  If they are prescriptive, then that means it’s not how people behave, so we are telling them to behave in a way that isn’t natural or true to their lived experience.  That seems destined to fail.  We’re not talking about sin or the natural man being an enemy to God.  It’s not a sin for a man to be nurturing or for a woman to be decisive.  It’s not against the commandments for a woman to earn money or ask someone to say a prayer or for a man to go to parent teacher conferences, clean a toilet or cook dinner.

If we are all a mix of male and female brain characteristics, a gender soup, somewhere on a continuum, then the assignment of familial duties based on an assumed gender binary will create discomfort for most people.  Are the gender roles in the proclamation supposed to function like a cultural restriction to assign us and keep us in distinct genders that don’t occur naturally, sort of like foot binding for our genders?

Maybe a more useful parallel for the the marital roles in the proclamation is a job description. [2]  In the workplace, a job description prevents you from stepping on a colleague’s toes in the workplace or from being inefficient and overlapping duties.  But still, it’s kind of silly to create job descriptions for people’s marriages.  What’s the point?  A marriage is more fluid than that, and both of you are owners, not employees.  You carve out your own job duties together using communication skills and mutual respect.  If you rely on “gender roles” to define work, it’s a recipe for entitlement and blame.  It gives you a basis to outsource tasks to your partner and then criticize how they do it while having no firsthand experience with the difficulty of doing it.

George Eliot’s novel Middlemarch illustrates this very well as both Dr. Lydgate and his bride Rosamond Vincy navigate the perils of their failing marriage.  They each invent an imaginary set of motives and thoughts for the other person, one that fits their own romantic ideals about the other sex.  Relating to one another on the basis of this fantasy rather than engaging with each other using direct communication has repeated disastrous consequences.  The author laments:

“Poor Lydgate! or shall I say, Poor Rosamond! Each lived in a world of which the other knew nothing.”

“She was as blind to his inward troubles as he to hers; she had not yet learned those hidden conflicts in her husband which claim our pity.  She had not yet listened patiently to his heart-beats, but only felt that her own was beating violently.”

The gender roles they embrace undermine their ability to know themselves or each other and prevent true communication from occurring.  Instead, they can blame one another for failing to live up to their expectations.  Rosamond is disappointed that Lydgate doesn’t earn as much money as her father did, so she feels it’s unfair of him to expect her to manage a household on such a small budget.  Lydgate expects her to defer to his manly strength and admire him for it, but instead he finds that she is clever enough to subvert every attempt to influence her while seeming to be the picture of feminine sweetness and docility.  Their untested assumptions about the other sex results in continual miscommunication and lack of empathy.  Rather than creating intimacy, these beliefs create barriers to communication, resentment and tension, and result in a very unhappy marriage.

Too much specialization erodes empathy.  In a work setting, it’s why the sales department complains about operations and operations complains about the finance department.  We know the frustrations of our own jobs, and we underestimate the negative impacts our performance has on peers in other roles.  We are keenly aware of the ways they negatively impact our work, though.

We used to joke at American Express that every job description ended with “and other duties as assigned,” so if anyone ever objected to what they were asked to do, it fell into that catch-all category.  And clearly, the phrase “individual adaptation may apply” performs the same function in the proclamation.  Nobody is guaranteed that their job duties won’t change in marriage.  There are no free passes on responsibility just because of one’s sex.

Because we are individuals, not just the sum of our gender, then what is the best practical advice to strengthen marriages?

[1] A caveat:  Often, essentialism supports and is supported by transphobia, as essentialists claim that a person’s sex is the sex they were coercively assigned at birth (often mischaracterizing this sociological sex assignment as “biological”). It’s common for essentialists to claim that trans people’s genders and sexes are less valid than cis people’s genders and sexes, by using irrelevant scientific facts like the unchangeability of chromosomes to lend their arguments scientific legitimacy. In this case, essentialists support a double standard that involves using a trans person’s karyotype to undermine their innate sex and gender, while never asking that a cis person be karyotyped to confirm that they are the gender and sex they say they are. A related form of essentialism is the use of “male socialization” to insinuate that trans women are really men, while refusing to acknowledge narratives from trans women that show that many trans women were never fully recognized as male and absorbed the same social programming that girls and women do.

[2] The problem is that I didn’t apply for this job, and I’m not sure I want to work at this company now that I’ve read the job descriptions.

44 thoughts on “Gender Soup with Roles”