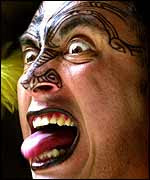 As for the Maori, I knew that they were Pacific Islanders and that their dances and clothing bore some resemblance to other Pacific Island cultures but a little warmer due to climate.  I knew the men danced the haka and the women danced with poi balls.  I knew that they once practiced cannibalism (practice makes perfect!) and were considered fierce by early European seafarers who visited the islands.  I knew that one of their greetings (touching foreheads and sharing a breath) is similar to the Eskimos (rubbing noses).

What are the Maori Mormon prophecies?

Here’s a quick primer on the Maori prophecies for my fellow novices.  Maori families are patriarchal and elder members of the extended families are often considered to be prophets.  While many Maori had converted to Christian sects as a result of European missionary efforts, some were unsatisfied with their standing in these new religious communities.

Before we get too excited about the uniqueness of these prophecies, Wikipedia also notes that Maori converts to other faiths also joined due to familial prophecies.  These faiths include the Ratana church, founded by Tahupotiki Wiremu Ratana; the Ringatu church, founded by Te Kooti; and the Church of the Seven Rules of Jehovah, founded by Simon Patete.

Where Have All the Maori Gone?

Ex-Mormon discussion boards point out that many Maori have fallen away from the LDS church, although based on my own experience, there are still more Maori overall than Pakeha (white) members in New Zealand.  Apparently, many Maori converts came to believe they were descendents of Hagoth’s people in the Book of Mormon.  Is there any reason to believe the Polynesians or Maori are descendents from Hagoth or from Israel?  Gina Colvin of Patheos discusses the origin of this idea in her post “What Ever Happened to Hagoth?”:

The Mormon’s [sic] weren’t the first people to  come up with this idea of a semitic origin for Māori.  Samuel Marsden, the first CMS missionary to New Zealand was touting it back in 1814.  This idea of being ancestrally related to an oppressed class of Israelites roaming landless in the wilderness was a compelling one,  particularly when settlers began appropriating Māori land through legislative violation in the 19th century.  Māori adaptations of the Christian/biblical tradition were extraordinary and are worth studying in their own right.  But the Mormons bought their own brand of relevance to their 19th century Christian preachings.  Not to be outdone by the Anglicans, Methodists,  Ratana  and Ringatu,  the missionaries adapted the story of the Book of Mormon to give  it some compelling local relevance.  In doing so they hit on the story of Hagoth.  A 55BC ship builder who sailed off the coast of America never to be heard of again.

She concludes that the DNA, culture, and linguistics don’t point to Israel:

So I grew up feeling somewhat proud of Native American connections and studied Thor Heyerdahl  and those of his ilk religiously in my 20’s.  Yet this active pursuit of an understanding as to the ancestral origins of Māori has not over the intervening years lead me to Israel or South America at all, rather it has lead me to the Lapita culture of the Bismark Archipelago, to Melanesia, a West- East migration from Asia (including Taiwan) to  Fiji, Samoa and Tonga. And an eventual migration from Eastern Polynesia where the roots of the typically Māori material and linguistic culture began to take hold.

Likewise, the migratory timelines are an obvious mismatch for New Zealand specifically as the Maori only populated the islands 800 years ago, about 1250 years too late for Hagoth, but just in time to conquer the people who were there before them, of whom we know little (well, our taxi driver in Rotorua claimed to know a little).  There are many Polynesian members who see themselves as descendents of the Book of Mormon people, and there are statements from prominent church leaders promoting the same claim.  These statements are taken very seriously by converts who see themselves in the stories of the church.  When science doesn’t support the claim, some leave.  On the other hand, apologists claim the science is complex.  And we also have the Malay theory of the Book of Mormon that has been discussed here, here and here.  If the Book of Mormon took place in an Asian setting, the Polynesian connection is restored (as well as resolving issues of geography, steel, horses, and elephants).

Marjorie Newton provides an in-depth look at the history of the LDS church in New Zealand in her book “Tiki and Temple: The Mormon Mission in New Zealand, 1854–1958.”  Her book points out that these prophecies were not universally accepted as referring to the Mormon faith.  She also notes that many Maori converts were unwilling to forsake their own healing traditions for the laying on of hands done by the Pakeha elders.  She also reveals that much success was owing to Hirini Whaanga, a Maori convert and immigrant to Utah in the 1890s who returned to New Zealand to preach to his native people.  Other Maori cultural practices caused new members to feel conflicted between loyalty to their heritage and their new faith, including the practice of facial tatoos:

These tattoos had hereditary meaning for the Maori and signaled their rank and status within the community. Mormon missionaries, however, believed that they violated the Word of Wisdom and sought to discipline any member who received the tattoos after baptism or augmented already existing ones. The frequency with which such transgressions occurred, however, forced missionaries to treat the tattoos cautiously. One woman whom a local Maori branch leader had excommunicated had her sentence remitted to a simple act of public confession.

Louis Midgley describes his experiences teaching Maori during his New Zealand mission in the 1950s, and in specific how they responded to the Book of Mormon:

The Maori read the Book of Mormon differently than I did. I was anxious to find proof texts and was busy harmonizing its teachings with what I understood to be correct doctrinal teaching back in Utah. The Maori, in contrast, saw it as a tragic story of families in conflict and subtribes and tribes quarreling with each other and bent on revenge for personal insults and factional quarrels. They looked more at the larger patterns of events and less at what might be construed from particular verses. They saw stories of ambitious rivals to traditional authority trying to carve out positions of power and territory for themselves. They perceived how ambition led to quarrels within families and between extended families and tribes. They understood the atonement as an exchange of gifts between our Heavenly Father and his children, somewhat in the way their own relationships were marked by reciprocal acts of hospitality as manifestations of love.

He elaborates that in teaching Maori families, many of whom did not convert (although nearly all were welcoming and inviting), they gave their reasons for not committing to the new faith:

They explained that their problems were not with our message but with sin. I was stunned by their candor. They explained in painful detail that they were too weak, too addicted to beer or other vices, to join the church. They pointed out that they were very much like the people described in the Book of Mormon; they lacked the spiritual strength to stay on a righteous path for long. In fact, they saw the Nephite book as a description of their own situation, and they saw themselves as, at least partially and in some way, descendants of Lehi’s colony in America.

*Jemaine Clement of Flight of the Conchords is of Maori descent (his mother was Maori).  He is not a Mormon.  Incidentally, if you go to the Rotorua Museum and see the introductory film (which is so frequently unintentionally hilarious that I began to question if it was intentional) that’s Bret McKenzie in the role of volcano victim Edward Bainbridge.  That dude is everywhere in New Zealand!  (He is also FIGWIT in LOTR).