A while back, John C began a discussion at By Common Consent regarding the role of the Church Educational System in the development or maintenance of members’ testimonies. I wrote my own comments about it at Irresistible (Dis)Grace, and I consider both posts prerequisite reading for this one (aren’t I a stinker?), but I wanted to discuss this issue from a different angle. Near the end of John’s discussion, a commenter, Blain, made this statement:

You can have meat. You just have to find it on your own. Choking on it is a common initial experience, but it doesn’t have to be fatal.

There are two ideas in this statement that can be picked at, of course…the first is whose responsibility it is to seek the “meat”. The second, however, is what one does to consume it safely.

Who’s responsible for the meat?

One divide between many commenters at the BCC post was between whether the church (or some body of the church, like CES or Sunday School) or the individual was primarily responsible for the meat — most of the criticisms of the church’s coverage of controversial issues only make sense if one assumes that the church had a responsibility or duty to inform and educate its members of these controversial details.

Maybe it isn’t, but my thoughts are that if the church wants to at least nominally refer to certain aspects of its institution in terms couched in connotations of learning (e.g., Church Educational System, Sunday School, Seminary, etc.,) then calling out the content provided through these avenues is fair game.

On the other hand, the argument that the church isn’t responsible for these issues has some merit. After all, polygamy really isn’t the show here. Historical race issues really aren’t the main dish either. The church really doesn’t have any reason to publicly air its dirty laundry, either. So, if time is precious, why focus on those issues when the church has other pressing priorities?

So, let’s just assume that individuals are responsible for finding the meat themselves. Great. But then, things aren’t completely resolved…where should they find the meat?

It’s all well and good to say that members should study source documents and dive deep into philosophy and theology and history and who knows what else, but most people simply aren’t going to do that. Instead of everyone having to start from scratch (or, to go with our food analogy, start with butchering the cattle live), it would make sense for people to have places to go (in the same way most of us can get fast food.)

…Or maybe it’s a perfect analogy.

So, if we’re talking about people searching for meat, and if it’s reasonable for people to want to find prepackaged deals, then the issue is how will people do quality control? For people who were shocked by some fact about the church they had learned, the problem may not have been that they didn’t research enough, but that they researched extensively but weren’t able to find anything compelling that was sympathetic to the church. From the church’s perspective of maintaining members’ spiritual fitness, so to speak, if the church will not provide meat and leaves members to fend for themselves, then what happens when the products on the market are mostly unhealthy?

How can one ensure meat is safe? 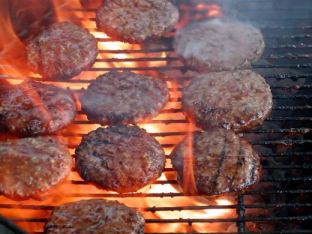 Disregarding Word of Wisdom language that meat should not be eaten, except in times of famine or winter, most people aren’t ideologically opposed to meat. In other words, meat isn’t bad per se. To carry the analogy back to the church, the raw facts of most points of LDS church history or doctrine aren’t bad per se. Two people can come across the same controversy with respect to church history or doctrine, and one can have his testimony shattered, and the other can be unfazed — suggesting that perhaps the decisive factor isn’t always just what the person learned. (For this reason, I understand that informed believers can understandably be annoyed when disaffected members may say things like, “If you knew x, you wouldn’t believe anymore.”)

If the meat itself isn’t necessarily the problem, then what makes the difference? Instead, maybe what makes meat dangerous is how it is prepared. How it is cooked.

So, here are the real questions: if the church does not institutionally provide meat, then should it at least teach a framework for members to prepare the meat so it is safe? And what would that look like? What are the commonalities of well-informed member testimonies? Is there something that well-informed, thoughtful members commonly do when confronting new or controversial information regarding the church so that their testimonies remain strong (however changed they may be)? Is there something that can be exported to anyone confronting new issues in a reliable way?

Here, it seems to me like blogs like the various ones throughout the Bloggernacle, journals like Dialogue, and of course, apologetics groups like FAIR may be good non-institutional efforts to teach people how to approach the cooking process for new meat, BUT because they are non-institutional, they lack the scope and the force that an institutional church effort would have. To put it in another way, how many people in your ward do you know who would read Wheat & Tares, By Common Consent, Times & Seasons, or the journal Dialogue?

22 thoughts on “Who will teach us how to cook the meat?”