An article in December’s issue of the Ensign is making waves by altering the traditional imagery of Joseph Smith translating the Book of Mormon. In Elder Marcus B. Nash’s “Joseph Smith: Strength Out of Weakness,” two different images show an object next to Joseph Smith not typically seen in LDS depictions: a hat.

If you ask members to visualize Joseph Smith translating the Book of Mormon, most would likely see Joseph sitting at a simple wooden table. His tired head rests in one hand. He stares down at the open gold plates illuminated only by the light of a nearby gas lamp. Oliver Cowdery, his scribe, sits across from him, carefully recording Joseph’s dictation. The mental image is likely inspired by one of two different paintings by Del Parson often seen in church publications (see here and here). Other depictions are similar. In the illustrated Doctrine and Covenants Stories for children, for example, Joseph is shown reading the gold plates by candle light.

But that’s not what happened. Most members would remember, if prompted, that Joseph used ancient interpreters later called the Urim and Thummim, clear stones bound together like spectacles, found with the gold plates. But Joseph’s use of an additional instrument, a small chocolate-colored seer stone, wasn’t well-known among members due to only fleeting references in a few church magazine articles. In June 2013, The Interpreter, an online apologetic journal, published a lengthy article on the instruments used in the translation process. The author, Roger Nicholson, wrote,

Modern portrayals of the translation process such as that shown in the popular animated television show South Park2 depict Joseph looking at a stone in the bottom of his hat and dictating to his scribe, without the use of a curtain… This is a method which I did not learn about in Seminary, and there are anecdotal stories of Latter-day Saints who, upon being presented with this portrayal, simply deny that this method may have ever been employed, attributing such depictions to “anti-Mormon” sources.

In December 2013, a Gospel Topics essay on the Book of Mormon translation was released, confirming that the South Park version was indeed a more accurate depiction of the translation process than the Del Parson paintings in church manuals.

According to these accounts, Joseph placed either the interpreters or the seer stone in a hat, pressed his face into the hat to block out extraneous light, and read aloud the English words that appeared on the instrument.

In 2015, the church released photographs of the seer stone believed to have been used in the translation of the Book of Mormon. The images were subsequently published in the October 2015 Ensign. Since the Gospel Topics essays were never widely publicized among members, this Ensign article was the first serious exposure many members had to the seer stone. It was also the first time many found out the gold plates weren’t used in the translation process, just Joseph Smith, the instruments (Nephite interpreters or the seer stone), and a hat. As commenter Disappointed said yesterday,

The article discusses the translation process of the Book of Mormon and does discuss the seer stone. I was floored. I had encountered the seer stone a decade earlier on the main street in Nauvoo. A shop front had all sorts of “crazy” anti-Mormon flyers taped to its windows. The one that stood out to me was a drawing of Joseph Smith with his head buried in a hat. “What a ridiculous lie,” I thought. The joke was on me, the above article hit me hard.

I was left with all kinds of questions, and then noticed none of the illustrations used to show the translation process portrayed Joseph’s head buried in a hat. They show the stone, yes, but not the method…. Why had the church never commissioned a painting with Joseph’s face in a hat to block out the light so he could see the words as the appeared on a rock? If this is what happened, why wasn’t it discussed or portrayed in lesson manuals, ever?

Commenter Disappointed wasn’t the only one asking these questions, which brings us to today. 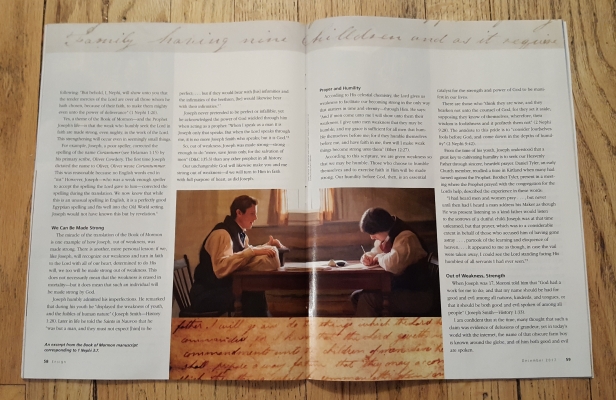 The article “Joseph Smith: Strength Out of Weakness” in the current Ensign is from a February 10, 2013 address Elder Nash, a member of the Seventy, delivered at the 70th Annual Joseph Smith Memorial Devotional. The address was published several years ago on the Revelations in Context website. In reference to the translation process, the original speech said,

This was dictated, word by word, as he looked into instruments the Lord prepared for him, using a hat to shield his eyes from extraneous light in order to plainly see the words as they appeared.

This speech was almost a year before the release of the Book of Mormon translation Gospel Topics essay, so Nash’s mention of the hat was notable. However, neither the seer stone nor the Nephite translators (Urim and Thummim) were mentioned specifically. Luckily, someone in the church magazines department recognized the need to update Nash’s info. In the current article, the description goes,

Joseph dictated it word by word as he looked into instruments the Lord had prepared for him, including the Urim and Thummim and at times a seer stone, using a hat to shield his eyes from extraneous light in order to plainly see the words as they appeared… [fn1]

But it’s the pictures that are the all-stars in this article. The first translation image is on page 57 in the printed issue, showing Joseph Smith with his first scribe, Emma. On the table next to Joseph is a light-colored hat turned upside down.

Then, spread across pages 58-59 in the printed issue, is a larger image of Joseph Smith and Oliver Cowdery at work. Joseph’s right hand is resting on what appears to be the gold plates wrapped in white cloth. Peeking out behind the wrapped gold plates is a black hat, upside-down on the table, under Joseph’s left hand.

Just for fun, I clicked over to the church’s media library, curious if the newer images were available as resources for members. Not yet. Del Parson’s paintings will remain the standard… for now.

20 thoughts on “Tip of the Hat to Church Magazines: More Accurate Book of Mormon Translation Images in Ensign”