Elder Russell M Nelson recently spoke at a YSA Devotional at the Marriott Centre. See the link here. His presentation was largely unremarkable; however his wife raised a few more eyebrows in her presentation.

Let me start by saying that speaking about sex within our religion is something that I support and think that we should do a lot more of. I know many who struggle sexually. This is an issue to many people in the Church.

This post will go through some of Sister Nelson’s suggestions and I will offer my thoughts, or thoughts that I have heard from others.

Sister Nelson starts with the notion that she (as “Auntie Nelson”) is presenting “Four Truths”. I’m not sure what religious and/or academic notions she is relying on to make that assertion. From a religious perspective, she hold no official church position, these “truths” have not been asserted by apostles, are not contained in any official church publication or scripture and are not otherwise self-evident. From a professional perspective (acknowledging that she was very successful professionally as a Family and Marriage Counsellor), I know of no one I associate with (I’m currently completing my PhD in Psychology) or have ever associated with in an academic way, that speaks of their position as truths. They will speak of their position as having support, that other studies provide strength to their position – but never that they have a truth – particularly when we are talking about psychology or the social sciences. My personal position on these truths is that I have significant concerns decreasing to normal concern as we move from “truth” 4, 2, 1 and 3.

She indicates that truth is brought to a person by the Holy Ghost through Heavenly Father. I have listened to what she says about this a few times and I’m not sure exactly what she is getting at. Strengthening her position regarding “traditional marriage” as opposed to gay, defacto and Tinder relationships was where I ended up. But I’m happy to hear your thoughts in the comments.

I was also rather concerned about her “Truth is truth and lies are lies” comment. Again, I’m not really sure what she meant by this, other than to strengthen her own position of talking in “truths”. In the specific topic of sexual intimacy, I am inclined to think less in “objective truths” and more in terms of “what works for you”. Even in the things Sister Nelson mentions, there is significant scope for how you might, for example, be pure, partake of the wonders of sex and how you might want to involve the Holy Ghost.

–          Sister Nelson setting up a dichotomous relationship of truth and lies, relative to marital intimacy 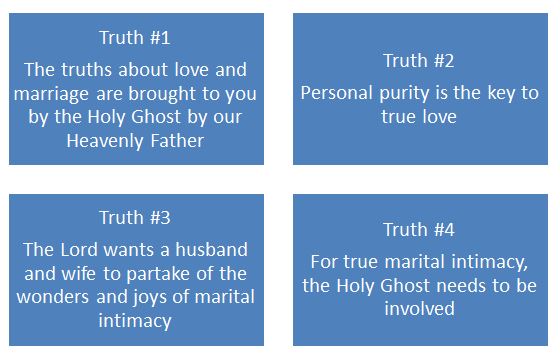 I get what Sister Nelson is trying to get at here. Be the best and most righteous person you can be and you are in the best position to give of yourself and be in “true love”. Not everyone would agree wholeheartedly with that, but it is a nice idea. However, what starts as a nice idea quickly deteriorates.

She lists prayer and scripture study, avoidance of pornography, temple attendance – and even searching out family names – as ways to prepare for true marital intimacy. For my assessment this is taking it a little too far. In other words, the best thing you can do to prepare for sex is to be righteous. No mention of being a good communicator, becoming empathetic, dating people, developing the ability to be comfortable with various aspects of intimacy (social, emotional and physical). No mention of seeking advice and guidance from a counsellor like her or a psychologist or a doctor (if there are physical issues). No mention of speaking to friends, or trusted people around you. Just read the scriptures, pray and do temple work. I don’t get it. I do get that having similar goals and values as your current or future spouse is important, but when it comes to sex – and especially resolving issues with the challenging aspects of it – reading about the wars between the Lamanites and the Nephites probably isn’t going to help all that much. I have heard from people who have attended counsellors with LDS Social Services, that similar advice is often given in relation to a wide array of issues people present with.

Whilst it sounds “icky” to talk about it, I have the least issue with this one. It does sound a bit silly to insinuate that God is up there looking down as a proud parent when his children are having His approved intimacy/sex.

However, indicating that this is a normal and expected part of married life is a good thing to say, albeit obvious. Although it is interesting that she prefaces her remarks about this that it will “Boggle your mind” because Satan and the world (I guess that means everyone who is not a member of the LDS Church) believe the exact opposite?? Again, I’m not sure exactly what she means by that (People believe it strange that God wants married people to have sex??).

Unfortunately, she reiterates the link between righteousness and good sex in this section as well.

In the end, though, I’m happy to get out of this section, perhaps what she intended. And to me that is that it is OK for married people to have sex.

To sum up this section, I appreciated:

But have concerns that:

–          The link between righteousness and good sex is reiterated

OK. I get it. We always need the Holy Ghost with us. But during the hot, sweaty throws of passion – not for me, thank you very much. She again reiterates the notion that personal righteousness will increase the amount of the spirit in your life and will subsequently affect your sex life. She then lists things that will take the spirit away such as anger, lust, un-forgiveness, contention immorality and unrepentant sin. Again, I get that she is saying that we need to be the best people we can. But at the end of the day, we are all sinners and I’m sure that God does not have some way of ruining our sex lives if we got angry at that idiot for cutting you off at the last intersection.

This, to me, is just extremely clumsy language. What a ridiculous idea that you would associate sex and the Holy Ghost. And to think that “lust”, which is defined in the dictionary as strong sexual desire for someone, is somehow going to drive the spirit away. What a load of garbage.

–          The claim that sin, which affects us all, deleteriously affects our sex lives

Sister Nelson then creates a distinction between “worldly sex” and “marital intimacy” – which presumably is sex that people have when they are not members of the church and sex that righteous church members have respectively. The idea of creating this distinction is confusing to me. Probably the biggest issue I have with this dichotomy is that she appears to be indicating that good, appropriate or respectful sex can only be had in the marriage of two people who are members of the LDS Church. This is clearly a ridiculous idea. What would non-members who attended this event think of this sort of divisiveness?

Sister Nelson goes on to mention some aspects of this distinction:

I’m not sure where to start here.

In relation to (1) I don’t subscribe to the notion that Satan is in the bedroom of non-members, however, I find it hard to accept that sex does not involve carnal (relating to physical, especially sexual, needs and activities) and sensual (of or arousing gratification of the senses and physical, especially sexual, pleasure) feelings. Isn’t that what sex is?? As for devilish (like or appropriate to a devil in evil and cruelty), I believe this is not the norm in most relationships, and at the extreme end, would represent a criminal offence.

In relation to (2) – again, I don’t believe this is the norm. I believe that most couples work together in what they are respectively comfortable with, and enjoy that.

In relation to (3) Sister Nelson makes the claim that the notion of lust (defined above) is the antithesis of love. I don’t subscribe to that. A husband or wife having a strong sexual desire for someone is a part of love. I can’t see why lust and love can’t coexist.

In relation to (4) – Anyone can denigrate another person sexually. This is surely not, though, something that happens routinely in relationships of people that are not in the church.

In relation to (7) – The fact that Sister Nelson doesn’t realise the inappropriateness of this analogy is the funniest thing here. In either case, I see no real way this information could assist anyone with their sex life.

In relation to (8) – I believe this is what they invented restraining orders for.

I think it is a good thing to talk about sex. We do not talk about it enough and lots of people have hang ups about sex. However, I have significant issue with the content and potential consequences of this talk. My main issues are:

–          The presence of musical instruments in any sexual analogy

–          Does the information presented in this talk accord with your experience?

–          Is this sort of information going to be helpful to couples with sexual problems?

34 thoughts on “A Response to Sister Nelson.”