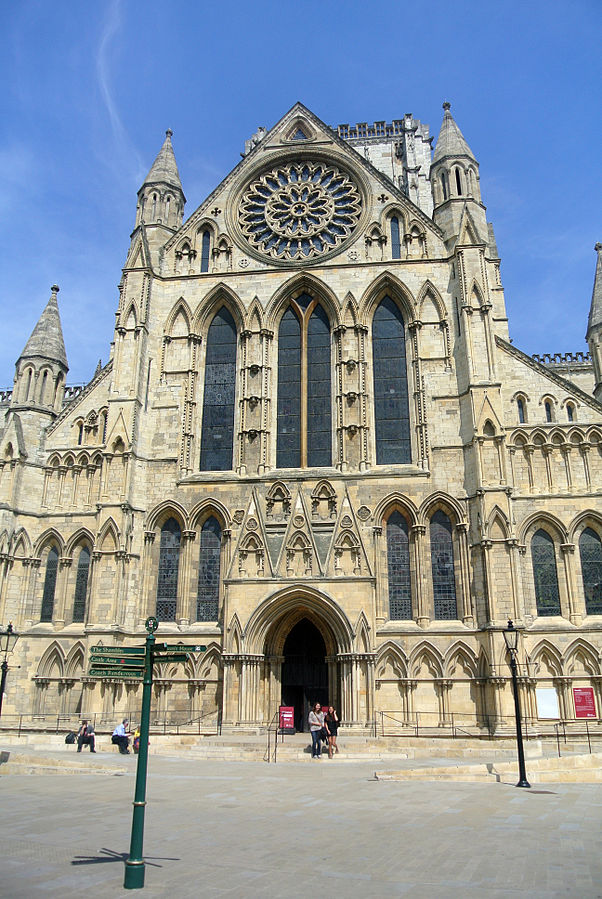 Having just returned from a few days away in York, I wanted to comment on York Minster. I mentioned on a similar post last year that family holidays don’t seem complete without at least one visit to a place of worship. York Minster is particularly spectacular, and is the largest Gothic cathedral in northern Europe. York Minster is the cathedral in York, and as such the seat of the Archbishop of York, the current incumbent being Dr John Sentamu.

As is the case for many old buildings the fabric of the building has suffered the normal wear and tear from use, and erosion due to weather. York Minster has also experienced fires – most recently the roof of the south transept in 1984. In the 1960s it was found necessary to underpin the foundations of this enormous building when surveys showed it was at high risk of collapse, due to crumbling and insufficient foundations. This work was undertaken at the same time as archaeological excavation under the Minster, which uncovered part of the remains of a Roman fortress.

Work is currently under way to restore the east end of the Minster. This work is being undertaken with very great care, and in part also corrects earlier repairs and restoration where the wrong materials were used, both glass to repair the stained glass windows, and stone repairing the masonry. Traditional methods and templates are being used both in restoring the Great East Window, and masonry. Masons can be seen cutting stone in their outdoor workshop alongside the Minster, and there are exhibitions inside the Minster for both the restoration of the stained glass and the masonry.

Restoration work on the stained glass in the Great east Window will result in clearer pictures in the glass than has been seen in recent times. Glass pieces have been analysed to identify later additions used in repairs. In the original window the lead between the individual glass pieces was quite narrow. Later repairs used much thicker lead obscuring much of the detail in the images. The York Glaziers Trust publish a panel of the month on their website, showing the restoration of particular panels for the window, showing the before and after.

Masons are working to conserve and replace 3,500 stones in the east end of the Minster, including a new figure of St Peter, newly designed replacing a badly weathered and difficult to identify figure, and also replacing a number of badly weathered grotesques. Images can been seen on the Minster’s Stoneyard web page.

What impresses me is that this conservation work isn’t simply aimed at preserving the existing structure in perpetuity. There is recognition that the building remains a current place of worship, and is in constant use. There is recognition that changes have been made to the building over the centuries. I love that grotesques and the statue of St Peter are being replaced with fresh carvings, designed and researched by today’s masons, rather than attempting to preserve the weathered and decaying stones they replaced.

I recommend following the links for images of the windows and masonry. For those interested the PhD thesis of Dr Alexander Holton looking at the conservation of the east end of the Minster available to download online.

I was struck during the hours I spent looking around the Minster, by the following analogy, which may work for you or not. Repairs made in earlier decades or centuries didn’t always used the right materials, introducing stone which weathered more rapidly, heavy lead obscuring the stained glass images. Yet the repairs kept the building functioning for many years rather than allow it to fall into decay. Those carrying out repairs did what they could with the knowledge they had, and were acting in a way they felt to be best. Perhaps it’s a poor analogy, but it reminded me in part of the situation of the LDS church in respect of our history; materials used, stories developed, which don’t withstand the weathering of time, but which made it into manuals, now being replaced by the materials researched from the archives, removal of the heavy leading obscuring much of the picture. From images of the restoration work so far, it looks like the east end of the Minster will be a triumph on completion. Can we hope to see a similar triumph when the LDS church emerges from this period of wrestling history?