What does it mean that the church is a restoration?  As I grew up in the church, I always thought of restoration as implying stuff fell out that had to be put back in.  Things that fit into this category included:

But it could also mean that impurities are removed, as in restoring the finish on a piece of furniture or restoring a historical building by removing modern embellishments.  This might include things like:

If you’re about to say, “But wait a minute.  Christ fulfilled the Law of Moses,” consider other things that were “restored”:  polygamy, creating a personal application of the Abraham covenant by becoming part of the house of Israel, and ordinance linkages to the house of Israel; they are chronologically from the same era, demonstrating that we are somewhat arbitrary in the things we’ve restored and the things that didn’t make the cut.  We are already cherry picking.

Here’s a dictionary definition of “restore”:

In the church, I think we mostly consider definitions 1 and 2 which leads to the idea that we are literally doing things like they have always been done anciently.  We can easily imagine Adam and Eve teaching Family Home Evening, Alma reassigning Home Teaching routes, and the sons of Israel playing a little six-on-six hoops.  Obviously, this is not a very realistic image.  Many of our restorations fail the “literally historical” sniff test on closer inspection.  Perhaps definition 3 is a better way of looking at it.  Christianity was no longer healthy, sound or vigorous (I believe the word “dead” was thrown around to contrast with “true and living”).

Another analogy for restoration might be a reboot.  My experience with rebooting is that your system stops responding properly, having gotten gummed up over time with too many free downloads or kids’ programs left running (you people know who you are).  You finally throw your hands up and say “I give up!” and possibly a few choice curse words, and then you shut the whole thing down and start again, hoping against hope that the thing will actually come up and work again.  The definition of rebooting is to restart or reload an operating system.

What I like about this analogy is that it seems to me that all religions run a certain course from pure to impure to dysfunctional over time.  Even our own church has downloaded a few bad programs since its inception in 1830.  For example, the Ham doctrine was like a viral spam attachment we opened that some Protestant converts (*cough cough* Brigham Young) sent to us.  Converts are often found trying to run their old programs on their new PC.  Over time, maybe all churches go through this same cycle, starting with purity, and ending at dysfunction.  This of course would imply that eventually there would need to be another restoration, unless we have such a great anti-virus system (ongoing revelation) that this stuff just doesn’t get through or quickly gets taken out if it does.

A third way of looking at restoration is retconning.  For those who are comic book or sci-fi fans, this term will be familiar (or its longer version: retroactive continuity).  The definition is to retroactively revise, usually by reinterpreting past events, or by theorizing how the present would be different if past events had not happened or had happened differently. 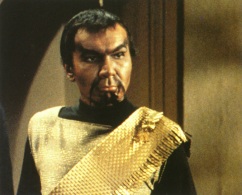 A simple example of a retcon from Star Trek is the change in the appearance of the Klingon race.  The change was so dramatic that the show constantly referred to it as an incident from the past that Klingons would not discuss as a matter of honor (wink, wink).  The obvious answer for viewers was that the budgets got a lot bigger, and the make-up technology improved greatly in the 20 year lapse between Original Series and Next Gen.  It points to one of the biggest issues with retconning:  suspension of disbelief.

There are many reasons retcons are done (from Wikipedia):

Often proof-texting is used to prove the new story is a valid alternative that fits in somehow with the original story line.  For example, there are scriptures that are important to Mormonism that nobody else gives a fig about (JWs do this a lot also).  Consider these:

Revelation 2:17 He that hath an ear, let him hear what the Spirit saith unto the churches; To him that overcometh will I give to eat of the hidden manna, and will give him a white stone, and in the stone a new name written, which no man knoweth saving he that receiveth it.

Galatians 4:7 Wherefore thou art no more a servant, but a son; and if a son, then an heir of God through Christ

I can’t help but think there is an element of retconning in this picture of Adam who clearly just walked out of a SuperCuts wearing a suede 1970s wrap dress.  Speaking of Adam, there’s this line:  “Adam was a prophet; first one that we know . . .”  We have redefined the word prophet to mean leader of the church on earth at a given time, although Adam is never referred to in this way in any of the historica.

So, do religions retcon?  Absolutely!  For a quick non-LDS example, consider Handel’s Messiah, using the words of Isaiah to refer to Jesus Christ.  It’s one interpretation, but most Jews would disagree.  Another example of retconning is when Constantine converted to Christianity and wanted to identify the original Christian sites.  Did he actually find the house where Jesus was born, hundreds of years later, or the exact site of the crucifixion?  Probably not, but it gave believers a contemporary tangible touch point to make their faith real.  And as I’ve said elsewhere, you could build a briar patch out of all the supposed crowns of thorns that are out there in cathedrals.

As Hugh Nibley illustrated in his book Temple and Cosmos, the temple is a probable retcon.  In showing the similarities of all temple rites, he also showed the differences between ours and those of ancient Israel and the impossibility of ensuring that the rites are identical from era to era.  We don’t have a clear read on the origins of the modern temple session (which wasn’t even documented for the first 30 years), but we sure do all we can to tie it to practices from Solomon’s temple or the tabernacle, whether it is actually the same or not.  The real question is where does revelation end and retconning begin?  Is it all revelation?  How do you know?

Grant Hardy, in his book Understanding the Book of Mormon, points to the problem of the unreliable narrator.  One example he gives is that Moroni essentially retcons Christian faith into the story of the Jaredites in Ether.   He does this by adding his own commentary rather than actually fabricating what is recorded, but if you separate his statements from those he takes from the record, you can see that the Christian worship is his own insertion, not explicit in the record.

In my view, we’ve got elements of all three at play in the church: restoring, rebooting, and retconning.  And all three have worked to varying degrees, but there have been some slip-ups as well.  We’ve restored some things we shouldn’t have.  We’ve not restored some things we should have.  We’ve got security risks due to strange bedfellows and new converts.  And we’ve convinced ourselves that some of what we’ve retconned was historical when it wasn’t, which results in suspension of disbelief issues.  With our process of ongoing revelation, this often gets cleared up over time.

Ultimately, I’m left with that 3rd definition of restore:  to bring back to a state of health, soundness, or vigor.  Whichever method we’ve used, we’ve definitely invigorated Christianity with our version.  Even if it’s not been perfect, it has been restored.

*This was originally published in BCC but has been updated for our W&T readers.

10 thoughts on “What does Restoration mean?”