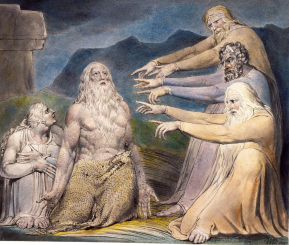 The word “Redeemer” in the Book of Job could be more accurately translated as “Vindicator.” When Job cries out “I know that my Vindicator liveth” he is defending himself from the accusations of his friends who think he is guilty of sins which have led to his sufferings. It is a poetic way of saying “One day God will vindicate me of these insulting charges and convince you knuckleheads that I am righteous!”

The translation of “redeemer” as “vindicator” gives us new ways to think about the concept of redemption. We commonly understand redemption as something Christ does for us to help us out of the messes we’ve made for ourselves. Mormons are constantly reminded that we are all sinners in need of repentance. Job’s dogged insistence on his personal righteousness is at odds with modern LDS conceptions of sin. If Job were a Mormon, he would be asking himself whether or not he was sinning by not “enduring well” instead of constantly talking about how righteous he is. But what if Job understood something about the nature of redemption which we are missing? What if redemption also means “vindication?”

When Christ was on the cross, He said these beautiful words: “Father, forgive them, for they know not what they do.” Here Christ is acting as Vindicator, demanding that God drop the charges of murder against His killers because they were not actually conscious that what they were doing was wrong. Earlier He had told His disciples, “They who kill you will think they are doing God a service.” If these murderers honestly thought they were doing God a service, how can they be guilty of sin? For me, that is one of the great hidden messages of the atonement: God weighs our hearts, minds, and weaknesses in the balance and finds us “not guilty by virtue of diminished capacity.”

The Injustice of Self-Criticism 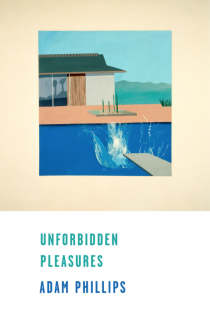 We live in a culture that is reflexively self-critical. We are extremely hard on ourselves and each other, continuously imputing sins even when they are the inevitable consequences of built-in weaknesses which God has given to us (Ether 12:27). In his book Unforbidden Pleasures, Adam Phillips discusses the problematic nature of self-criticism and its roots in what Freud called our “super-ego.” Phillips claims we suffer from a kind of Stockholm Syndrome relationship with our boorish, accusatory super-ego.

How has it come about that we are so bewitched by our self-hatred, so impressed and credulous in the face of our self-criticism, as unimaginative as it usually is? And why is it akin to a judgement without a jury?…We are continually, if unconsciously, mutilating and deforming our own character. Indeed, so unrelenting is this internal violence that we have no idea what we are like without it. We know virtually nothing about ourselves because we judge ourselves before we have a chance to see ourselves (as though in panic).The judged self can only be judged but not known. [1]

Our super-ego pronounces guilt upon us and others long before all the facts have been taken into account. We routinely “under-interpret” our sins. Instead, according to Adam Phillips, we should “over-interpret” them.

You can only understand anything that matters — dreams, neurotic symptoms, literature — by over-interpreting it; by seeing it from different aspects as the product of multiple impulses. Over-interpretation here means not settling for one interpretation, however apparently compelling it is. Indeed, the more persuasive, the more compelling, the more authoritative, the interpretation is, the less credible it is, or should be.

I think this is what the Atonement is all about. By coming down to live as one of us on earth, Jesus takes all the facts of our existence account, all the dimensions of a lived, painful, messy, human experience. His final verdict is: “Forgive them, for they know not what they do.”

The Limits of Over-Interpretation 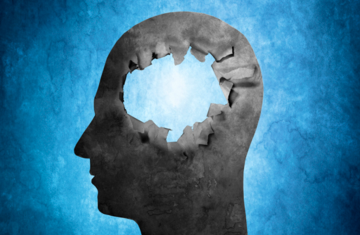 In a Radiolab episode called Blame, there is a fascinating story about a severely epileptic man who underwent brain surgery. To get rid of the epilepsy, doctors removed a golf-ball sized piece of brain tissue from his skull. After the surgery, the epilepsy went away, but a few months later, the FBI came knocking at his door and arrested him for possession of child pornography. The epileptic man never had a problem with pornography before the surgery. At his trial, a neurologist testified that during the surgery, portions of the brain associated with moderation and discipline had been removed. As a result, the judge gave the man a reduced sentence due to his diminished capacity.

After reviewing the case, one of the Radiolab moderators asked the question: “What if one day, our neuroscience becomes so advanced, that we are able to find roots for all criminal behaviour in the biological structure of our brains? Does this mean criminals will no longer be found guilty? How much free will actually exists when you get down to the neurological nitty gritty?” Fundamentally, these questions test the limits of what Adam Phillips is calling “over-interpretation.” Can we over-interpret crime so much that culpability disappears altogether? In the end, the Radiolab moderators agreed that when there are crimes, there must be punishments. Biology is no excuse.

I agree with Radiolab. Sins are sins and they have consequences. That is the law. But the atonement is about transcending the law through mercy. Mercy is not forgiveness for forgiveness’s sake. Forgiveness is given because “they know not what they do.” Christ could only forgive us after He understood where we were coming from, after He had experienced things from our perspective. Mercy is about coming to an understanding.

Anyone who has struggled to forgive someone else knows that one of the most effective ways to learn forgiveness is to come to a better understanding of who those who have wronged us and why they wronged us. Once we understand all the pressures and pains going on inside the perpetrator’s mind, our feelings of ill-will and resentment begin to fall away.

At the end of the day, our opinions on this question will come down to how much free-will we think we actually have. I personally believe in limited free-will.  I lean towards Calvinism in that respect. Our autonomous spirit (our super-ego) is only one dimension of our identity, an identity we share with other unchangeable biological, cultural, and collective dimensions which are out of our conscious control. We are both “creatures to act AND creatures to be acted upon.” I believe the atonement is the process of sorting out how much we are actually culpable of. The generosity of the atonement comes from the fact that in the end, we will be culpable for very little (and conversely worthy of very little), because we were acting according to forces beyond our control.

“I Do Not The Wrongs I Am Charged With Doing”

I love Joseph Smith’s phrase, “Although I do wrong, I do not the wrongs I am charged with doing.” Joseph was referring to the accusations of sexual impropriety which had dogged him since his Kirtland days. He honestly believed in his heart that he was innocent of wrongdoing with regards to polygamy. Whether or not polygamy was objectively good or bad, whether or not God objectively approved or disapproved of polygamy, we must understand that from Joseph’s perspective, he was doing God’s will. And ultimately, Joseph’s perspective is the only thing that matters to God and to him. That is where God meets Joseph and judges him. That is where He meets all of us. He doesn’t judge us by arbitrary or universal standards of moral correctness. He judges us according to our own understandings, according to the state of our heart. If Joseph honestly believed God commanded him to practice polygamy, then he is innocent of any objective moral standard we might use to judge him. Even if polygamy is somehow objectively in error, Joseph is as innocent as Christ’s killers, for he, like them “knew not what he had done.”

[1] I highly recommend reading more from Phillips about the delusion of self-criticism here. Particularly enlightening is his analysis of how self-criticism is intimately connected with self-love and his insights on Shakespeare’s phrase “conscience doth make cowards of us all.”

17 thoughts on “I Know that My Vindicator Liveth”