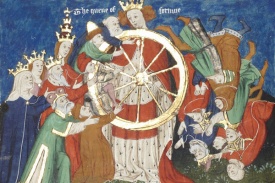 Last week I had the pleasure of conducting Carmina Burana, a hair-raising oratorio composed by Carl Orff and dedicated to Adolf Hitler. The opening number “O Fortuna” is a thrilling hymn to the god of fortune featured in countless films and television commercials. The lyrics come from poems written by mediaeval monks who were supposed to be preoccupied with prayers. But these verses are filled with pagan odes to gambling, fate, drinking, prostitution, and springtime. Notwithstanding the subject matter, the poems are written with a great reverence for Fate, as if Fate was God Himself.

The wheel turns; I go down, another is raised up;

Sits the king at the summit – let him fear ruin!

We live in an unpredictable world. Like a wheel of fortune it can bring rain in due season or unwanted famine and pestilence. Religion and science try to make sense of this unpredictability with two basic interpretations: fate and karma. A fatalistic worldview interprets life as unknowably determined by God or the laws of nature, while a karmic view interprets the world as tailored specifically to mankind and subject to his choices. When tragedy strikes, the fatalist says “shit happens” and the karmic says “everything happens for a reason.” 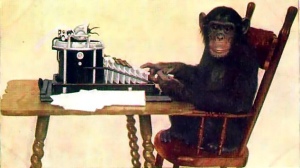 Proponents of a fatalistic God include pagans, Calvinists, and scientists. Pagans anthropomorphise fate through various mythical gods representing the conflicting forces at work in the world. Like Oedipus who accidentally murdered his father and married his mother, we are the unwitting victims or beneficiaries of forces beyond our control. Calvinists believe we are predestined through God’s grace (or fate) to be saved or damned regardless of our works. Scientists and secularists also believe in a wheel of fortune which guides the random mutations in genes which create the complexities of life. They don’t use the name “god” to describe the wheel of fortune, but rather “chance,” “chaos theory,” “randomness,” or “monkeys at typewriters.” [1] For many scientists, freewill is an illusion, and we are simply the natural by-products of the random forces that led to our creation.

God of Karma: A Universe of Works and Meaning

In other religions, everything happens for a reason. Jehovah said: “if you keep my sabbaths I will give you rain in your season…but if you keep not my sabbaths, you shall sow your seed in vain and your enemies shall eat it.” Joseph Smith says “all blessings are predicated upon obedience to the law upon which it is predicated.” A Karmic God has created a “best of all possible worlds” calculated to give us all the best chance of getting to heaven if we will just make the right choices. When things don’t make sense, when “the wicked prosper and the righteous are cursed” we interpret these things as trials of faith which are really just blessings in disguise. Even the prosperity of the wicked can be interpreted as the “curse of riches.” This allows us to explain how God can be “good” and at the same time rule over a world full of suffering. A karmic universe is filled with meaning and has an answer for everything. 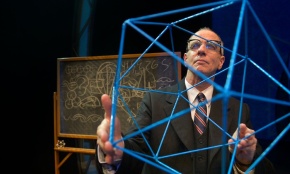 Some secularists hold karmic-like views, believing that the universe holds a purpose and meaning in our lives even in the absence of God. The great scientist and inventor Buckminster Fuller wrote: “Nature is trying very hard to make us succeed, but nature does not depend on us. We are not the only experiment.”

LDS View: Reconciling the Karmic and the Fatalistic God

There are difficulties with both the Karmic and Fatalistic interpretations of God. The universe is both extraordinary orderly, and extraordinary random. It’s hard for scientists to explain the complexities of life through random gene mutations, and its hard to defend the terrible sufferings and inefficiencies of life as the work of an omnipotent, benevolent God who is simply encouraging us to grow through karma. In my opinion, a true depiction must somehow account for both karmic and fatalistic dimensions of God. It turns out LDS doctrine does an admirable job of reconciling these two viewpoints.

In LDS doctrine, God organises the universe out of pre-existing elements. The existing universe is filled with “oppositions in all things.” Opposition is the inescapable nature of reality, what we call fate. God may intervene at times, blessing us for righteousness, or giving us trials for our growth, but ultimately, He can’t be held responsible for the general state of opposition in which we live, which He did not create.

An Exemplar God also works within a pre-existing “oppositions in all things.” But He is actually member of our species, a former human being who has evolved to become a God. His role is that of exemplar within the chaos of creation. By example, He teaches us how to cope with, and eventually become masters of the random world in which we live. I really like this interpretation. It resolves the meaningless of fate by placing it as the backdrop in a compelling narrative of eternal growth.

3. God as a Vision of Humanity’s Future 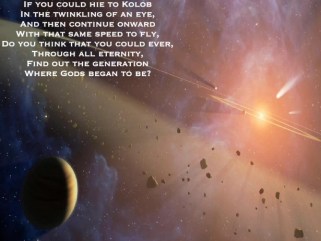 This is my own interpretive extension of LDS doctrine. If, as Joseph Smith suggests, we will become gods someday, then our god-selves already exist in space-time. Perhaps our god-selves ARE the God we worship, an expression of our future, which is drawing us up into Itself.  William Wordsworth says, “The child is father of the man.” Perhaps we are the father of God, by being “gods in embryo.”

I like this interpretation because it seems to reconcile Fate and Karma most efficiently. The universe is meaningless and fatalistic. But human beings create meaning within that universe by creating God, and even becoming God. This might seem an absurd theory, but think about it more broadly. The hymn “If You Could Hie to Kolob” asks the question: “Do you think that you could ever, through all eternity, find out the generations that Gods began to be?” Even if gods have already existed for trillions of years, how did the first gods begin to exist? Would they not have had to evolve from lower forms of life? Would there not have had to be someone who became the “first god?” And in what environment would that first god have created itself? Would it not have have to be a meaningless universe, because there would not have been anything there to create its meaning before God? So whether we create meaning in the universe by creating God, or our distant ancestors on other planets created God, someone had to create God in the first place. Why couldn’t it be us?

[1] It might seem strange to describe atheistic scientists as reverencing a kind of “God.” But their view of randomness ticks all the boxes for a God: Randomness (or God) created the universe. Randomness (or God) gives rise to life in its endless variety. Randomness (God) is mysterious, displaying seemingly miraculous properties of emergence. The miraculous properties of emergence are every bit as spectacular as Jesus’ miracle of turning water into wine, or even more so. The miracle of life has been described by Bill Bryson as being about as likely as a tornado rushing through a heap of scrap metal and turning it into a Boeing 747. A mystery indeed!