Apologies to everyone for the similarities between Hawkgrrrl’s recent post!  Same subject, different approach.

Terryl Givens’ book A People of Paradox: A History of Mormon Culture presents four fundamental paradoxes in LDS culture. Some in the church might argue that there are no paradoxes. The church comfortably embraces all truth in one great whole. Others see conflicts and contradictions everywhere and it shakes their faith. They expect the fulness of the gospel to have all the answers. A church led by modern prophets who speak with God should be able to explain things satisfactorily and resolve conflicts. What happens when they can’t?   A People of Paradox gives us a new way to look at conflicts within the church, not necessarily as problems in need of a solution, but fundamental aspects of our LDS identity, tensions which give Mormonism its character and dynamic power. In my next four posts, I’ll present each paradox along with a discussion of possible ways of resolving or dealing with the paradox.

Joseph Smith grew up in a world moving decisively away from the Calvinist philosophy of “irresistible grace” (wherein actions and destinies are predetermined by God) to the supremacy of individual autonomy. This new humanist celebration of free will was in direct conflict with the idea of a God who created the world ex-nihilo. Givens writes, “As creator of the human soul, God is ultimately responsible for the human soul’s nature-its proclivities, tendencies, and appetites.” All religions of the day were wrestling with this problem, but according to Givens, only Joseph Smith was able to truly solve the problem by boldly declaring that human intelligence and free will is eternal and uncreated, co-existent with God Himself. “The formulation cuts through a Gordian knot that had confounded religious philosophy in America since before its founding: the conflict over freedom and determinism…”

…said Joseph, “God never had the power to create the spirit of man at all…Intelligence is eternal and exists upon a self-existent principle. It is a spirit from age to age and there is no creation about it. The first principles of man are self-existent with God.” Joseph’s formulation is nothing less than a reconceptualization of the most fundamental division in Christian metaphysics: we move from a binary opposition between a unique Creator and infinite creatures, into a universe divided, as the Book of Mormon states, between “things to act, and things to be acted upon.”

Joseph’s position on free will was so revolutionary, so completely at odds with traditional Christianity, that Givens ponders:

Given these positions on freedom of the will, one might expect to find in Mormonism an uncommon hostility to dogma, hierarchy, and church authority… So it is all the more ironic that the church Joseph founded is one of the most centralized, hierarchical, authoritarian churches in America to come out of the era famous for the “democratization of religion.

Just how did a religion which valued independence and free will become one of the most authoritarian of churches? Joseph’s appeal to divine authority was as radical as his theology of eternal autonomy. “Believing himself the recipient of literal priesthood authorization by resurrected beings, Joseph avoided the problem of self-doubt about authority… the Protestant appeal to biblical authority lacked the certainty and singularity of a visible conduit and unambiguous line of transmission, and hence the assurance that it was divinely approved rather than of human initiation.”

The conflict between individualism and authority in Mormonism was immediately apparent. Joseph preached that God could reveal Himself to all individually, but soon discovered that “a church full of prophets was a holy bedlam” with competing revelations, seer stones, and angry debates. So Joseph soon revealed a priesthood authority that came a strict hierarchy of offices and keys. “No one shall be appointed to receive revelations and commandments for this church excepting my servant Joseph Smith,” (D&C 28:2) This revelations transformed “the role of a prophet into the office of a prophet…it wasn’t Joseph’s assumption of prophetic title that marked a distinctive turn in Mormonism’s cultural evolution. It was the construction of that calling into an office, which had no precedent in American religious history.” Givens sums up the conflict:

The consequence of these two traditions of emphasis on freedom and authority is an ever-present tension in Mormon culture between submission to an ecclesiastical authoritarianism without parallel in modern Christianity and an emphasis on and veneration for the principle of individual moral agency so pronounced that it leads even careful observers into major misperceptions (Mormons “earn their way to godhood by the proper exercise of free will, rather than through the grace of Jesus Christ,” reports one news magazine). Without moral independence, says the LDS scripture, “there is no existence.” “When our leaders speak, the thinking has been done,” says the (officially disavowed but widely accepted) LDS saw.

Givens notes that a “resulting collision of views and valuations is inevitable.” He is pessimistic about any attempt to reconcile these competing values. Rather a divide will always exist, not just between Mormons of different persuasions, but within individual Mormons themselves. One sociologist, who noted with surprise, “even the readers of Dialogue, presumably an independent-minded lot, in a 1984 survey, expressed a willingness by a margin of two to one to go along with Church policies that displeased them-perhaps with some question but with no ‘dissent,’ even privately.” 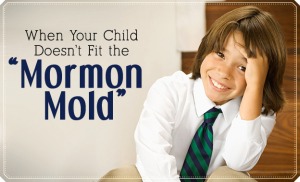 The paradox between authority and individuality is not unique to Mormonism, but exists in every organization. Anytime there is an authority, there will be individuals to challenge it. And every individual is beset with forces that seek to mould and bridle its free will.  So the authority-individuality paradox is not a problem in need of a solution, but rather a universal state of being. True, it is particularly acute in LDS culture, but this is simply because both authority and individuality are so highly prized. In our eagerness to alleviate the anguish caused by the paradox, we should not rush to attack either the authoritarian nature of the church, or the individuality of its members.  Givens closes his chapter on the first paradox thus:

“A segment of Mormon society will always be disposed to see unquestioning obedience to priesthood counsel as weakness and abdication of moral autonomy, while others will see independent-mindedness as a euphemism for the fetishizing of difference and pride.”

I see both authority and individuality as important.  They must share the same space, as difficult as it may be to do so. Liberals may have to fight for a place at the correlated table. But they must do so without attacking the legitimacy of the authority that sometimes seems so unfriendly to them.