I learned an interesting tidbit about LDS church history from Terryl Given’s excellent book, People of Paradox. Apparently in the early days of the church, debate “clubs” were popular among members. Not unlike the informal online gatherings in today’s bloggernacle, early LDS saints, Joseph Smith included, would regularly meet for debates, where they argued about politics and theology.   Winners were declared, and even devout followers of Joseph Smith were allowed to challenge him on points of doctrine. One example subject: “Was it, or was it not, the design of Christ to establish His Gospel by miracles?”  Givens writes:

In Nauvoo, debates became a standard feature of social and intellectual life. Joseph recorded, in February 1842, that he spent the evening attending a debate, then added that “at this time debates were held weekly, and entered into by men of the first talents in the city, young and old, for the purpose of eliciting truth, acquiring knowledge, and improving in public speaking.” Clearly, debates afforded an excellent exercise in logical thinking and expression. Joseph valued the practice, that his followers “might improvetheir minds and cultivate their powers of intellect in a proper manner.”

Debates were very popular among other religions of the day as well. Early missionaries would display formidable skill in engaging ministers of other religions in debates with large crowds in attendance. At one such event, 40 people were baptized after Orson Hyde “won” the debate.  The culture of debate and oratory also seems to have had a positive impact on the development of LDS theology. Its most gifted practitioners, Orson and Parley P. Pratt published passionate and reasoned defenses of the faith which dramatically influenced later understanding of LDS doctrine.

But there seems to have been negative consequences to this culture of debate as well. Because church doctrine and direction was up for debate, Joseph Smith was openly challenged.  During the Kirtland and Missouri periods, members who respected Joseph’s official revelations as divine, still openly questioned his authority to lead and the wisdom of his council. Oliver Cowdrey, at his church trial, defended his opposition to Joseph Smith by invoking his “constitutional rights.” His belief was that the church should be run more like a democracy than an authoritarian theocracy.

Even though Joseph Smith and Brigham Young asserted their authority to lead the church unopposed, a culture of debate still thrived within church leadership, most famously between Brigham Young and Orson Pratt who publicly opposed each other on points of doctrine throughout their tenures while remaining cordial in private. Gregory Prince’s David O. McKay and the Rise of Modern Mormonism presents abundant evidence of lively disagreements among the apostles of the 1950s and 60s, and I wouldn’t be surprised if elements of this debate culture survives among the apostles even today, in spite of decades of correlation and a concerted effort to put on a united front. 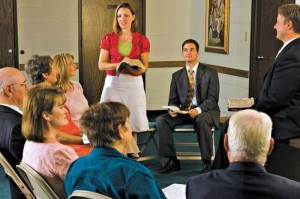 I travel a lot and have attended a number of wards around the world. My favorite ward is in Nashville. The members are faithful, good-hearted, and extremely opinionated. The sparks always fly during lively debates in Gospel Doctrine class with its mixture of Vanderbuilt liberals, country-loving conservatives, and sensitive songwriters. Nevertheless a refreshing sense of humor and humility pervades in spite of the outspokenness.  The church openly encourages class discussion and participation over lecturing from the teacher.  They trust the general membership to follow the Spirit in their discussions, which they often do.  Even in Nashville, where people are open about their disagreements, it seems to work quite well.

However, during a recent visit to a French ward, a discussion on the Proclamation on the Family quickly turned ugly after one closet liberal meekly suggested that single parents might be able to raise children as well as two-parents. At this comment, dozens of hands popped up in alarm and members spent the next 20 minutes stumbling over each other in increasingly hysterical efforts to defend the church against this outrageous intrusion. Needless to say, the Spirit was not in attendance.

It’s hard to imagine the besieged French saints being able to effectively foster a culture of respectful debate. They come to church to escape the cultural French disdain for everything they believe, not to engage in more debate about it. Many US saints feel the same way. Strict correlation is extremely important in validating an LDS culture with values increasingly at odds with those of the the outside world.  In such a defensive culture, debate of any kind is often synonymous with “the spirit of contention, which is of the devil.”

13 thoughts on “Would Joseph Smith Have Liked the Bloggernacle?”