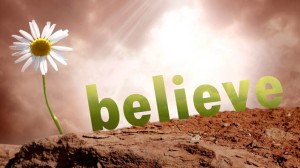 What does the statement “We believe all things” mean in the Articles of Faith?  To me it means that Mormons are fundamentally a trusting, believing people, not overly given to skepticism.  Joseph Smith said, “No man was condemned for believing too much, but he is condemned for unbelief.”  Believing all things isn’t just about accepting religious truth claims.  It is also about accepting all truth including scientific and expert witness in the broader culture.   Brigham Young believed that the truths of science and the inventions of the secular world were actual revelations from God, that we should embrace as such:

If you can find a truth in heaven, earth or hell, it belongs to our doctrine…We all live by the principle of revelation.  Who reveals?  Everybody around us; we learn of each other.  I have something which you have not, and you have something which I have not; I reveal that which I have to you, and you reveal what you have to me.  Are the heavens opened?  Yes, to some at times, yet upon the principle of natural philosophy.

We Believe All Things, Even When they Contradict Each Other

Unlike other fundamentalist believers, we are not antagonistic towards science and secular wisdom, but freely embrace new knowledge, even if it sometimes requires a reevaluation of other beliefs.  Utahns have always been proud of their dinosaurs, even if their existence might have compromised some of their Biblical viewpoints.  Ultimately, we believe all truth can be circumscribed into one great whole, but we also understand that our perspectives are limited. Science and religion will always have some conflicts.  Religion is about faith in things not seen.  If religion was demonstrably true, it wouldn’t require faith.  Brigham Young claimed that we shouldn’t be too dogmatic either about our own scriptural revelations, nor the revelations of science.  In all these things, we see through a glass darkly:

I do not even believe that there is a single revelation, among the many God has given to the Church, that is perfect in it’s fulness.  The revelations of God contain correct doctrine and principle, so far as they go; but it is impossible for the poor, weak, low grovelling, sinful inhabitants of the earth to receive a revelation from the Almighty in all its perfections.  He has to speak to us in a manner to meet the extent of our capacities.

Having the Humility to Embrace Scientific Consensus and Secular Authorities

I believe it is in the spirit of Mormonism to embrace the scientific and secular consensus and authorities of our day.  For example, 99% of all scientists accept the Theory of Evolution and Global Warming.  When someone disbelieves these theories, they adopt a suspicious and conspiratorial outlook on scientific consensus.  I believe this is an arrogant attitude.  Who are we, with our limited perspective, to doubt the education and integrity of thousands of people much smarter than we are?  This is an unfortunate characteristic of much of modern American political behavior.  We have a populace who distrust “experts,” who distrust the capable and educated leaders we vote into office, constantly “throwing the bums out.”  We often assume the worst of people, particularly people who have authority or expertice.  This is not in the spirit of Mormonism.

Of course many people hold conspiratorial views about scientific consensus because they think theories like evolution or global warming contradict their religious or political beliefs.  But evolution does not pose a contradiction to our beliefs.  Rather, the theory of evolution enhances LDS doctrine, by providing further insight into the way in which God created man from the dust of the earth, and the nature of our flesh, the “natural man” and its relation to animal instinct.

But what if the consensus is wrong?  True, scientific consensus does sometimes turn out to be wrong.  But even if it is wrong, I believe God would often have us embrace consensus.  For example, if I were living at the time of Galileo, and he tried to explain to me that the earth moved around the sun, I would say he was crazy.  Who am I to be so bold as to defy the consensus of 99% of the learned men of that day?  If however, I was also a learned scientist, and Galileo was able to convince me, perhaps I would follow him.  But in the absence of learning, I would be humble and trusting before overwhelming consensus.  I am not a revolutionary.  I am not a rebel.  Yes, some are born for this great calling, but for the majority of people, it is foolishness to defy the 99% and go after the 1%, simply because we hold consensus in contempt and are fundamentally distrustful and sceptical.

Having the Humility to Take Joseph Smith at His Word 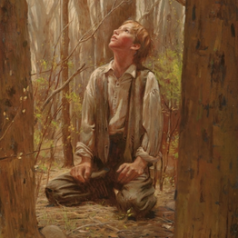 One might ask, “if you follow 99% of scientists by believing in evolution, why don’t you follow 99% of scientists and reject Joseph Smith and his preposterous story?”  Well I agree that the story is preposterous.  I accept what scientists say about horses and steel in Ancient America, and about the remote probabilities of Joseph Smith’s fantastic experience.  But at the same time, my honest study of the story leads me to conclude that Joseph Smith was a man of integrity, a conclusion other impartial secular experts have also reached.  When a man of integrity says he found golden plates, or saw an angel, who am I to doubt his testimony?  Who am I to doubt the testimony of the many other witnesses who also saw these plates and saw angels, even if they contradict other scientific beliefs I hold?  With regards to Joseph Smith, I believe all things.  I accept the integrity of the Smithsonian Institution’s position that the Book of Mormon is not a work from Ancient America.  And I also accept the integrity of Joseph Smith and the witnesses who handled real golden plates and saw real angels.   It is a contradiction, but there is no need to resolve it in my mind.

However, many people cannot deal with this contradiction.  Thus they force themselves to view Joseph Smith as a charlatan, even though there is no evidence that was in his character, and there is no motivation for such behavior.  Or they force themselves to view the scientific and historical consensus as biased, unfair, and perhaps under the influence of Satan.  I believe both of these approaches cast premature and unfair judgement upon either Joseph Smith or the Smithsonian Institute.   In my opinion, contradictions do not give us the right to reject the honest testimony of Joseph Smith, nor the honest research of science.  Rather, we should recognize that life is full of contradictions, and embracing contradiction is a sign of humility and trustfulness.

“God Told Me The Book of Mormon Was Not True”

On my mission, one of my investigators told me she had prayed and God told her the Book of Mormon was not true.  At the time, I was saddened that she had been deceived.  But now I wonder.  Maybe God actually told her not to follow us.  God says in the Bible, “I will stop their ears and shut their eyes that they be not converted.”    Ultimately, who am I to judge her revelation?  I was not there.  In the absence of knowledge, I will give her the benefit of the doubt.

My sister-in-law went to the temple and prayed to know if this was “the only true church” to which God responded “of course not.”  My parents were shocked and saddened.  But my response was: if we expect her to accept our testimony, should we not accept hers?  Is it possible that God could contradict Himself?  The scriptures are full of contradictions and paradoxes.  Yes, maybe she was deceived.  But maybe she wasn’t.  I believe it is wrong to categorically reject a testimony simply because it contradicts our own.

There is a place for skepticism.  Skepticism is the foundation of the scientific method and has contributed to much of the progress we have made in the world.  It is good to question things, think outside the box, innovate, etc.  But there is a difference between saying “This might not be true” and saying “I don’t believe that!”  It’s a question of attitude.  Cynical skepticism is flippant and dismissive.  It makes categorical assumptions based on prejudices and deeply held beliefs.  But healthy skepticism is respectful.  It accepts that something might be true, or it might not.  It “doubts doubts,” AND “doubts faith.”   As Mormons, because we are to “believe all things” we should err on the side of belief, and be slower to be skeptical.  We give people and ideas the benefit of the doubt.  But belief is not a sure knowledge, and I think it is sometimes beneficial to take things with a grain of salt, to ask questions, and to remember that things may not always be as they appear.  This is still within the spirit of “believe all things.”