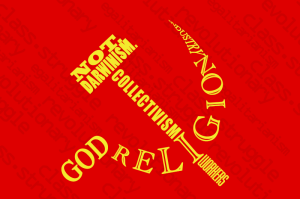 Satan’s glass imitations, Communism has some remarkable truths mixed with its errors, and Mormons share many of these same truths.  The similarities might make us uncomfortable, given Communism’s terrible reputation.   It’s tempting to casually dismiss Communism as “Satan’s plan” while ignoring the many similarities between it and the Law of Consecration.  We often dodge the issue by claiming that the Law of Consecration was not forced upon people as Communism was, and that makes all the difference, since in Satan’s plan, there is no free-agency.  But I’d like to take a closer look at the similarities and differences between Communism and Mormonism, with the intent of understanding both traditions in a more nuanced way.

The Zeal of Converts and Work Ethic

Before Communism became authoritarian, it was a grassroots collective of millions of zealous adherents, recruited in the same way any religion gains recruits.  It’s converts had tremendous passion, evangelical zeal, and absolute obedience.  The faith of early Communists rival the faith of our early saints and martyrs.  They were incredibly hard workers. Work itself was the supreme value, their first article of faith.  They believed they were part of a new world order that would require incredible sacrifice, discipline, and endurance.   They would have been shocked and dismayed to hear that their cause would later be associated with free handouts and collective lethargy.  For the first decades of Communism, its numbers grew not out of compulsion but out of individual free will and the courageous commitment to it’s cause in the face of great opposition.

The doctrine and practices of early Communism are similar to those of Zion in the millennium: no poor among them, all things in common, faith, obedience, loyalty, education, unity, industry, progress, and above all, the dignity and worth of the individual, the lost sheep, the least among us.  Both Zion and the Communists valued traditional morality: anti-adultery, pro-family, etc.   In both ideologies, pure doctrine was tightly controlled and overseen. Over time, in both traditions, complicated doctrines and theories were simplified so as to appeal to the masses and be understood by all.  In both ideologies, children are the most important of all: the rising generation is the greatest ever.  Children are the future!   The simple and pure nature of Communist and LDS doctrine could be understood and articulated out of the mouth of babes.  As in Zion, early Communists had their own prophets, scriptures, tracts and literature, testimony meetings to inspire obedience and faithfulness to the cause, calls to evangelize political action to pursue their righteous causes.   And while consecration was not forced upon the LDS people in communities where it was practiced, people who didn’t practice it were still subject to chastisement in the form of revelations from the prophet, if they did not obey.  Most of all, there was the absolute knowledge that this was best way, the only way.  All other ideologies were corrupt and apostate.

If you examine LDS and Communist media and arts, you will find significant similarities.  Both created there own new  collection of music and hymns which were championed and sung in primary schools and other meetings, containing utopian  visions of their doctrines.  They removed references in their hymns  and sermons to previous ideologies which were apostate.  They both had  numerous parades, celebrations, and loved to have big spectaculars and  pageants, designed to inspire wonder and awe in the audience.  They  both made lots of sentimental films and other media featuring lots of  joyous tears, pictures of happy families, and inspiring admonitions to  faith in the ideology.

The Problem of Agency

Early Communists didn’t think they were taking people’s freedom away , “Satan’s plan,” as we call it.  They weren’t enslaving the people, they were freeing  them.  For centuries, 99% of the people had been poor and ruthlessly ruled over by the elite 1%. Communism was designed to overthrow the 1% and empower and free the 99%.   The poor people were  already in desperate straights, with zero opportunities, and Communism  represented new freedoms and opportunities for them.  Once this happened, Communists assumed that people would naturally work hard and be industrious, collectively believing in a new world of progress and prosperity for all.   Communists didn’t expect to have to “force” their will widely upon the  people, as in Satan’s plan.  They thought that once the selfish and  degenerate 1% were removed, with all their evil and unnatural  books and ideas, that everyone else would naturally accept the self-evident true principles upon which Communism was built by their  own free will and choice.  This is similar to the millennial belief that one day  the wicked will be burned, and that everyone left will all be obedient  and righteous, not out of compulsion, but of their own free will.   While all the evil books and apostates were hidden away in Communism,  so also in the Millennium, Satan will be bound, and with his influence  no longer present, people will naturally be righteous.  Communists  didn’t expect that their revolution would cause widespread  bloodshed and decades of economic depression and eventual ruin.

The Blindness of Faith Leading to Bloodshed

We think of the leaders of the Communist parties as monsters and  murderers.  While this is certainly this is the case for some, it is a gross exaggeration for others.  While they knew that their New World  Order would require some bloodshed to free the people from the wicked,  evil elite, they never imagined it would usher in decades of brutal  terror.  As time went on, these great apostles of Communism started to  see that the battle would require more blood than they thought.  But because they still believed that utopia was just around the corner, they  continued.  Their faith was unshakable.  But after awhile, it became  clear that their dream was a nightmare.  Some, like Trotsky , branched off and tried to find more workable approaches.  Many of  these early Communist apostles were killed, and the ones that remained  were left with terrible blood on their hands, and nothing to show for  it, so they became seen as murderers and criminals.  But that doesn’t  mean that they didn’t do start out with pure  intentions.

When I look back at my zeal as a young missionary in the MTC, I think that  I would have been a diligent young Communist at that age, if I were raised in that culture.  Would I have stopped as soon as it became clear that the bloodshed and revolution would never cease?  Hopefully.  But that would depend on how strong my faith in the cause was.  The fact that we have our own Mountain Meadow Massacre is reason enough to question the power of our own faith and determination, when venturing out onto thinner and thinner ice.

While it’s true that Communism was atheistic, one has to remember  that the religions of the day were  corrupt, intolerant and  hostile to the ideology.  But even as they rejected the idea of God,  Communists pursued their ideology in the same fashion as proponents of a  religion would.   Science and technology became a kind  of pseudo religion.   This is similar to Mormonism.  We also saw all  religions around us as corrupt and hostile. Joseph Smith and many  of the early apostles were intellectuals and free-thinkers, with very  modern ideas about science and true religion being compatible.

Ultimately, the rejection of God was probably Communism’s greatest mistake.  They were unable to see how closely Communism’s own values resembled original Christianity.   Had the founders of Communism accepted God and religion, it might have saved them from all the blood and horror and allowed them to find a more workable and enduring form.

In the US, what has saved Capitalism from being a depraved hole of Social Darwinism, is the fact that it’s practitioners also believe in Christian principles.  We have set up churches, charities, and numerous social services that work beside  Capitalism, moderating and taming it’s more base instincts.  This combination of Christian  values, with the powerful social instincts of Capitalism, have made it  the greatest and most prosperous form of government ever known to man.

While pure Communism no longer exists, more moderate forms of Socialism do, and have been incorporated into almost every economy on earth today.  Our own economy is a mixture of Socialism and Capitalism.  However, finding a workable balance of these two forms is becoming increasingly difficult, as proponents of both Capitalism and Socialism become more extreme, continually painting the opposing side as “evil.”  I agree with most Mormons that Communism is an unworkable system of government that had to be scraped.  However, elements of Socialism can play a positive and moderating role in an effective  Capitalist government.   I believe that understanding the roots and initial similarities of both our traditions can help us see our current political situation in a more nuanced light, leading to greater understanding and progress.